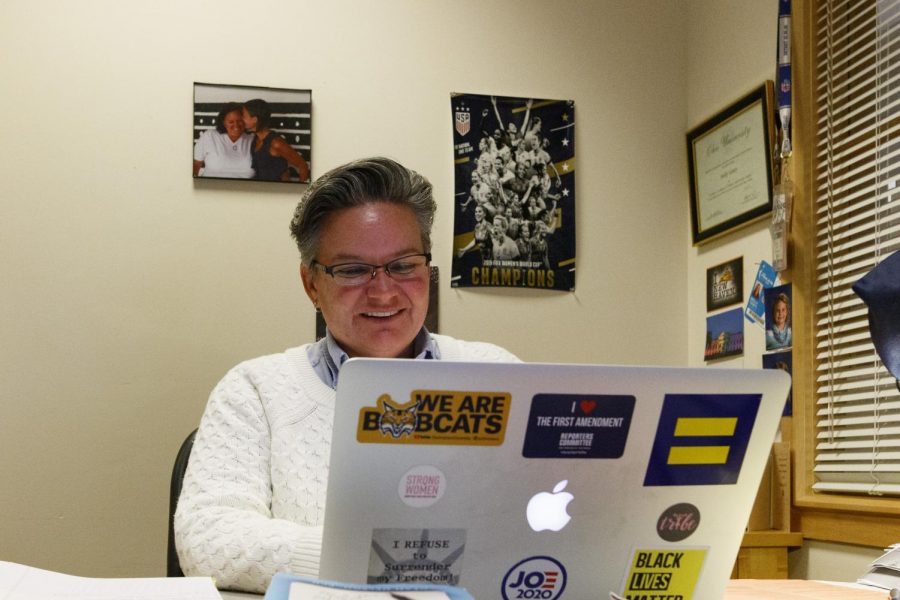 On top of teaching classes and grading papers, some professors also spend time writing books. Here are two Quinnipiac University professors who have recently added “author” to their resume.

“She has been doing a lot of research on fans, and we both just love watching the women’s World Cup,” Yanity said. “We were talking about fans and media coverage, so we decided we wanted to do some kind of book that mixes the two things that we research on.”

Yanity and Coombs have signed a contract with Palgrave Macmillan to publish their academic book, “Mediating the 2019 FIFA Women’s World Cup,” which analyzes how the 2019 World Cup was covered and consumed.

“This isn’t like I am getting a book contract with Simon & Schuster, and I am going to go on a book tour, and they’re going to turn it into a movie kind of thing,” Yanity said. “It’s an academic kind of book. People don’t really buy this book. A few will get published, and they will go straight into a library.”

Both Yanity and Coombs will be editing the book and are asking professors who also research similar information regarding the 2019 World Cup if they would like to include chapters in the book.

Yanity has been working on this book during the semester and pandemic.

“It’s been really busy,” Yanity said. “The good thing is that I’m editing this, so most people are writing it. I’m not doing all of the writing. I’m doing like two chapters … We work with one of (Palgrave Macmillan’s) editors, and she kind of cracks a whip and keeps us like, ‘This is what we’re supposed to be doing next.’”

The bulk of the book should be done after Thanksgiving and Yanity said the pair will likely send it out to get published in January.

“We made this decision to have it online first because we just want people to be able to read this stuff,” Yanity said. “… It’s not like a glamorous thing. It’s cool, and I’m stoked.”

Rebecca Bamford, professor of philosophy, is a scholar of 19th-century German philosophy. She has co-authored the first English book-length study about the book, “Dawn: Thoughts on the Presumptions of Morality” by Friedrich Nietzsche.

Bamford wrote, “Nietzsche’s Dawn: Philosophy, Ethics, and the Passion of Knowledge,” with Keith Ansell-Pearson, a professor of philosophy at the University of Warwick in England.

“Our book is a fully equally co-authored monograph on a book called ‘Dawn,’ which is one of Friedrich Nietzsche, the philosopher’s, middle writings,” Bamford said. “So, what we’ve done is basically do a full-length analysis of what philosophical work is really being done in that text. We’re suggesting it’s really a book of ethics.”

In philosophy, Bamford said co-authorship is not very popular. She said that she and Ansell-Pearson started off their journey working together by discussing their thoughts on Nietzsche’s writing.

“Then we wanted to try to do some writing and so each of us would draft chapters and the other would kind of review and make suggestions and bring in ideas from previous work, but also change and revise and reflect what the other was thinking,” Bamford said. “There’s a lot of back and forth and a lot of exchanging drafts. That made it I think a bit more complicated because you didn’t have complete control yourself … It’s really important when you do that that everybody is on the same page.”

Bamford said that co-authoring is a worthwhile experience.

“It really pushes you to defend why you think you have that particular position or particular analysis,” Bamford said.

Bamford and Ansell-Pearson sent their complete manuscript off to the press in September 2019 after editing and revising it themselves. The book was then peer reviewed by three anonymous reviewers. After receiving positive feedback, Bamford and Ansell-Pearson made revisions and completed indexing. In the summer, that aspect of the book was completed.

“The pandemic probably didn’t help with trying to do all of that work with other additional concerns going on, but by that point, we were mostly finished so it was more technical checking,” Bamford said.

After that, Bamford and Ansell-Pearson waited to see the final copy of their work.

The e-book version came out a few weeks ago and Bamford said the paperback version is on its way. She said having her work completed is exciting but also nerve-wracking.

“I got into academia because I wanted to make a contribution to knowledge,” Bamford said. “This book I think really does do that … This book makes a distinctive contribution and that feels really good … Slightly frightening because now it’s out in the world and people are going to start reading it and I hope we’ll have productive disagreements. So I don’t think of this book being the last word. I’m hoping it’s much more the start of an even more productive conversation.”