The death that woke up America 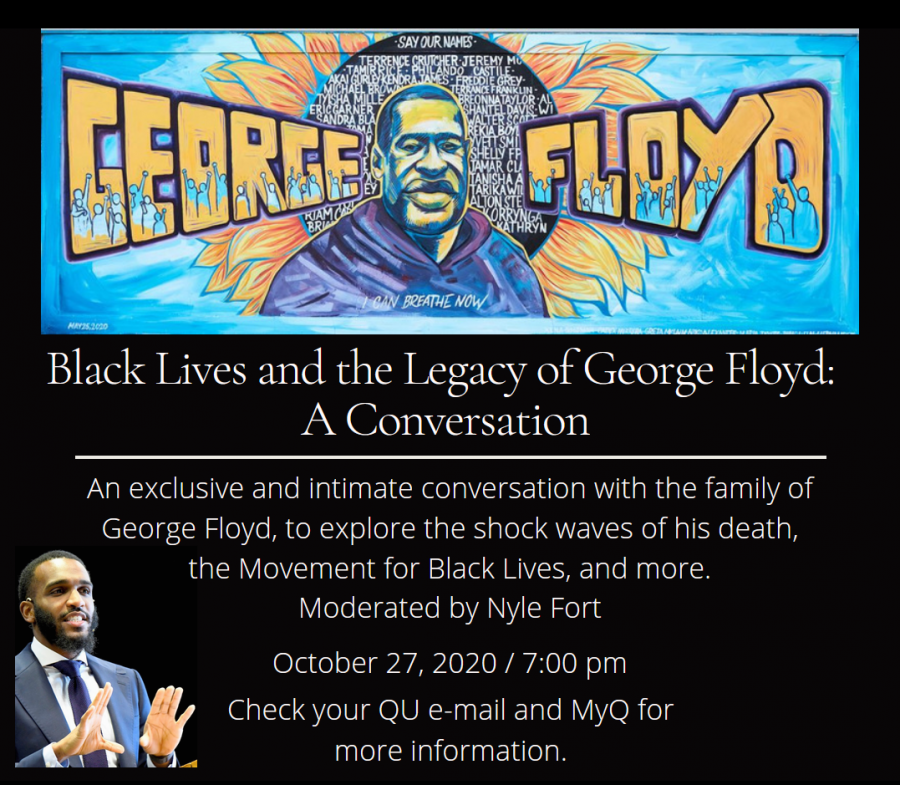 George Floyd’s relatives told the Quinnipiac University community on Tuesday, Oct. 27, that their nephew’s death would not be in vain if people continue the movement that it rekindled.

Floyd’s aunt, Angela Harrison, and his uncle, Selwyn Jones, answered questions from Quinnipiac faculty and students on a webinar moderated by minister and activist Nyle Fort.

“This is the biggest civil rights movement ever,” Jones said. “If we ever had an opportunity to make a change, this is it.”

Floyd, who was murdered by a police officer who knelt on his neck for eight minutes and 46 seconds on May 25, became the rallying cry for a major civil rights movement protesting police brutality and affirming that Black Lives Matter.

Protests broke out across the country and the world, and both Jones and Harrison got involved. Harrison, who lives in Minneapolis, Minnesota, where Floyd was killed, often met up with her nephew for meals and day trips. However, she did not learn of his brutal killing until she saw it on the news.

“He said those words, ‘Momma, Momma,’” said Harrison, who knows Floyd fondly as “Perry.” “And I just fell to my knees. My husband was trying to console me. I fell to my knees. I was confused. I was angry. I was yelling, I was crying.”

Since the incident, she has made it her mission to share Floyd’s story in the hopes that there will never be another death like his. She has also been involved in the construction of the “George Floyd Memorial” in Minneapolis.

“If I don’t have that hope, it’s like me saying Perry died in vain,” Harrison said. “Hope is what keeps me going. It’s what keeps everybody going.”

Jones also learned about his nephew’s death from a televised news report.

“I am looking at the television and the first thing I am thinking is, ‘Oh no, they are going to kill this dude! Somebody better help him, aw man,’” Jones said. “My telephone rings. I pick up the phone. My sister said, ‘Did you see what the police did to —’ I hung up the phone.”

Jones said he had more in common with Floyd than almost anyone else in the family. He called Floyd a “gentle giant” and someone who would give a stranger the “shirt off his back.”

After his beloved nephew died, Jones has traveled the country from Washington D.C. to Portland, Oregon, marching and speaking out against injustice.

“Since the day I saw him suffering and succumbing to an individual’s hatred and control and power, I have pretty much changed my life to the dedication to make change,” Jones said. “I found out on the 26th (of May), and I was marching on the 27th.”

Jones said he doesn’t expect to see any evidence of this movement until the next generation.

“I would hope and pray that before I die, I would be able to live in a place of equality and justice,” Jones said. “I just don’t feel like it’s going to happen for me, but I know that with the future generations it can happen.”

Fort pointed out that for the Black students on the call, they wouldn’t be at Quinnipiac or any other college if it wasn’t for the movements of the generations before them.

Attendees of the webinar were able to submit questions and comments. Fort said many of the comments included prayers and support for the family, but about half of the questions had the same theme: “What do we do?”

Fort gave the audience a three-pronged approach to making change.

“The first is to educate, two is to agitate, the three is to organize,” Fort said.

Since it would be difficult to fix something one does not understand, becoming educated on race in America is crucial, according to Fort.  Then, once equipped with the information, people can go out and help others get informed and then organize a movement.

“Racism just doesn’t manifest itself on the street that George Floyd was killed,” Fort said. “It manifests itself in housing, in education, in criminal justice, in healthcare.”

Harrison left the audience with the words that Floyd uttered as he was dying.

“It takes a lot of courage to say, ‘I can’t breathe,’ when you are in pain and you are in terror,” Harrison said. “He wanted to live. He fought for eight minutes and 46 seconds. He begged to live. When I thought about that thing, I thought he didn’t die with dignity, but he did die with bravery.”