After learning of a homophobic incident, LGBTQ students at Quinnipiac share their stories 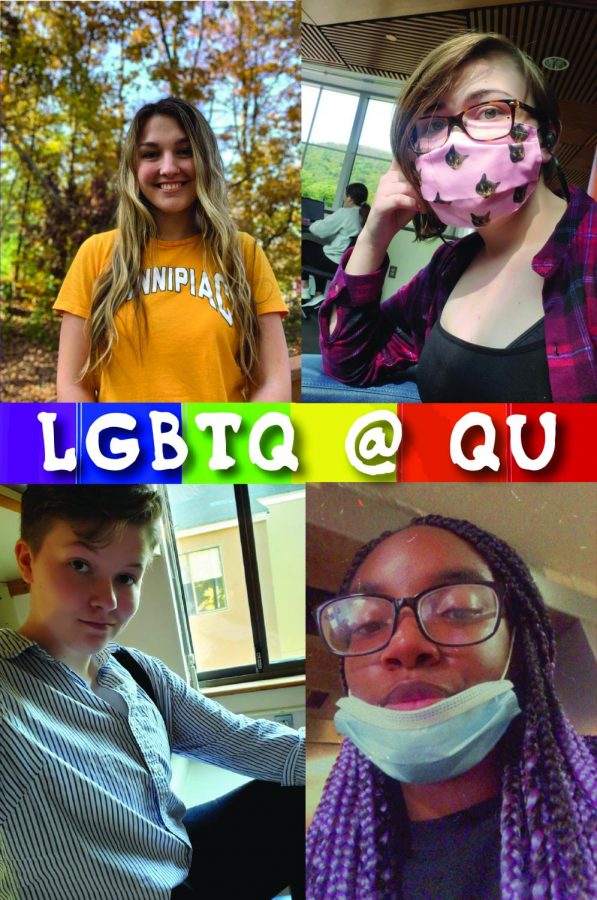 As a freshman, he came to college in hopes it would be a place that he could embrace his identity as a gay man.

Instead, he left campus in mid-October, not because of COVID-19, but because he was bullied for being who he is.

Quinnipiac has been criticized in recent months for a non-response to racial injustice. After Jordan’s departure from the university, LGBTQ students and their allies petitioned and protested against the administration’s response to the incident — an email from President Judy Olian.

A petition that garnered over 1,700 signatures laid out seven demands for the administration, which included more gender-inclusive housing and mandatory bias training to make the university a more welcoming place. Neither of these ideas were mentioned in Olian’s email.

“With the climate on campus, I really didn’t expect that many signatures,” said Athena Cuttle, president of the Gender and Sexuality Alliance (GSA) and senior psychology major. “But it was really nice. Some professors have reached out to me and said they have seen my movement. I really didn’t expect all of this.”

The protest following the email from Olian consisted of students gathered on the steps of the Arnold Bernhard Library two days in a row, holding signs asking for the university to take action.

Jordan’s story isn’t the only experience of being LGBTQ at Quinnipiac. While none of the following students have left Quinnipiac due to bullying, many of them have experienced what it is like to feel different or out of place at a school they are supposed to call home. 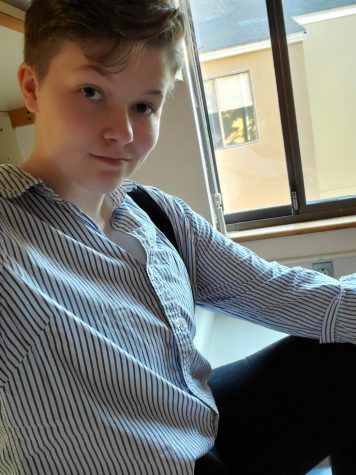 Satine Berntsen had only been out as a transgender male to two friends before he came to Quinnipiac. Here, he was hoping to fully embrace his identity.

So far, Berntsen said the majority of the students at Quinnipiac have been very accepting. He is a film, television and media arts major, and said the students in this department have welcomed him for who he is.

But due to the lack of gender-inclusive housing for freshmen, Berntsen lives in a single room.

“It started off with a question of, will I be forced to room with people of the same sex as I am,” Berntsen said. “I am transgender, female to male, and that would produce a lot of gender dysphoria for me, which I was not comfortable with.”

The Office of Residential Life answered Berntsen’s questions and told him that he could choose anyone he liked as his roommate. However, sas an incoming freshman, he didn’t know anyone.

“I couldn’t go out and ask, ‘Hey are you comfortable having a transgender person as your roommate?” Berntsen said. “You have to disclose that you are trans, or however you identify. You have to tell them and they have to be OK with it.”

Berntsen got a single room after asking if there was any way he could cut down on the number of people he would have to live with so there would be less people he had to come out to and be accepted by.

Not every aspect of his transition to college has been smooth, however. Berntsen said that none of his professors asked him for his pronouns, forcing him to come out to each of his professors separately, or deciding whether it was worth it correcting them when they used the wrong pronoun.

“I had to tell them my pronouns and tell them I was trans,” Berntsen said. “If we had some way to have teachers ask pronouns, even in the beginning. It’s the most basic thing, and it would help a lot.”

On top of not asking for pronouns, Berntsen said some professors have just been downright rude. After attending the protest on the steps of the library feeling proud of his identity, Berntsen said he went inside to wash his hands and used the men’s restroom.

“I walked in and felt immediate regret and shame,” Berntsen said. “There was a faculty (member) in there talking on the phone … they got out at the same time as me and looked at me and said, ‘You know there’s a girl’s restroom, right?’ And then laughed and walked away.” 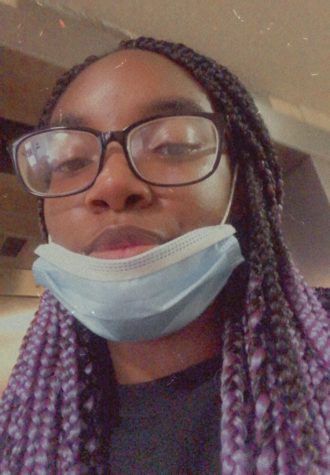 When Shaniya Harper came out to her family at the pride parade in New York, it was a special day.

“That was a pretty wonderful experience,” Harper said.

In contrast, during her two months at Quinnipiac, Harper said she feels that the LGBTQ community is largely “ignored.”

“It’s kind of disheartening,” Harper said. “I came here thinking I could be out. I am regardless, because I can’t be shattered. But it’s like, ‘ew. I don’t want to be here.’”

While Harper said she has been openly identifying as bisexual, her friends that identify as LGBTQ have avoided coming out.

“My friends are too scared to be out, and it’s like, ‘This sucks,’” Harper said. “Now we have to be closeted, and this whole thing sucks. Why do people have to be this way?”

Harper said her friends are scared to be themselves in fear of being targeted for homophobic acts and bullying. So far, Harper has not been bullied, and she’s hoping that nothing like what happened to Jordan ever happens again.

“I figured it would be a little more welcoming and not as cold, a little warmer than this at least,” Harper said. “They’re like, ‘We’re a diverse school,’ and I’m like, ‘You all are just using that as a marketing tactic.’ I can see it now. It’s a marketing tactic and in a way, it is not working.”

The feeling of Quinnipiac as “cold” stems from how “different” Harper said she feels.

“In that statement, there was nothing,” Harper said. “Nothing to be seen, nothing to look at, nothing to look forward to. Just nothing. It’s like they’re depending on GSA to come up with stuff so they can just low-key take the credit for it.”

GSA has been one of the only outlets that has made Harper feel at home so far at Quinnipiac.

“It’s so nice being and communicating with other people in the community like me,” Harper said. “It makes me feel a lot better being here. If it wasn’t for GSA, I wouldn’t be here, period.”

Cuttle, who identifies as an ally to the LGBTQ community, said that creating GSA as a safe space has been her mission.

“Everyone on GSA this year is wonderful,” Cuttle said. “They are so sweet, and we end our meetings and I can’t wait to have another meeting.” 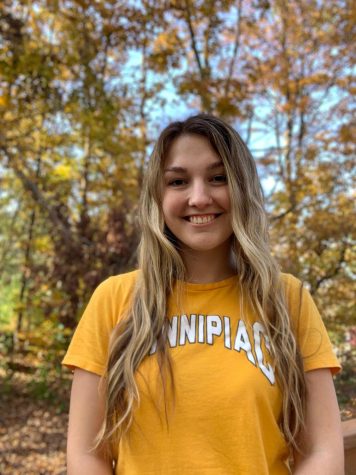 Lauren Goebert came out as gay when she was 14. When she came to Quinnipiac, it was the first thing she told her roommates. No one has ever bullied her for her identity here, so she was saddened to hear about Jordan’s experience.

“I have never personally seen any discrimination,” Goebert said. “This is the first time I have heard about it on campus, which really surprised me.”

Goebert said she is not scared to be herself at Quinnipiac despite the fact that most couples walking around campus holding hands are straight.

“I am comfortable showing affection,” Goebert said. “It’s a big thing in my relationships. I want to be out and open and not hide it.”

Part of the reason why Goebert feels she has been so accepted at Quinnipiac is that she said she is “straight passing.” She said many people can’t tell that she is gay, so she isn’t treated any differently because of it.

“If I fit the stereotype, I think people would be more, not unaccepting, but more uncomfortable about it,” Goebert said.

Despite her positive experience, Goebert is calling for change and action following the bullying that Jordan experienced.

“I’d love to see them suspended or at least removed from campus,” Goebert said. “That’s just disgusting and shouldn’t be tolerated whatsoever.” 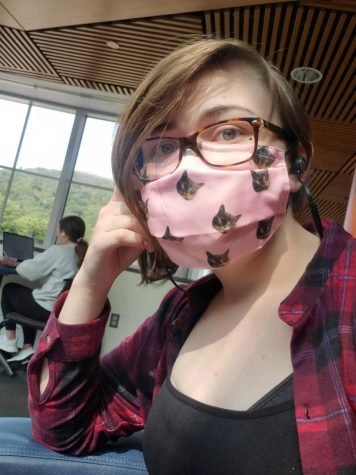 Caris Disharoon didn’t like to talk about their identity in their hometown, because they knew most of the people there weren’t very accepting. Disharoon came out as gender non-binary at Quinnipiac.

While many of the people Disharoon came out to seemed accepting, they were surprised at the derogatory words these people used.

“It felt kind of weird because they’d say they were supportive of me, but then they would call guys the f-word,” Disharoon said. “They would make jokes about gay men, using gay as an insult. They’d support me and turn around and make jokes that made me really uncomfortable.”

Disharoon said they can’t think of a time they were personally bullied at Quinnipiac, however, they do have some frustrations.

When friends slip up and use the wrong pronouns, Disharoon said they are quick to correct themselves. However, others continue to blatantly disregard their preference for they/them pronouns.

“It feels kind of like being ignored,” Disharoon said. “It sucks.”

Disharoon said they have felt uncomfortable correcting professors in class about pronouns, but like Bernsten, they were never asked at the beginning of the semester about which pronoun they prefer.

“It’s my place to say which pronouns I use, but it still feels a little weird,” Disharoon said.

At Quinnipiac, Disharoon said that people saying they support the LGBTQ communtiy and then acting otherwise is a common theme.

“They make these insensitive jokes and claim to be allies,” Disharoon said. “It leaves a bad taste in my mouth. It’s something you can’t have both ways … you can’t have your transphobic joke while still being an ally to trans people. It doesn’t work that way.”

In order to make Quinnipiac a more accepting place, Disharoon said that people need to be educated how to ask for pronouns and how to be a genuine ally.

“If things had been taken seriously as they were happening, (Jordan) might not have had to leave,” Disharoon said. “In theory, this kid could have stayed, and he could have had a better student experience. The way the university handled it was just absolutely inappropriate.”