How Madison Samoskevich's hockey experiences will continue the family legacy 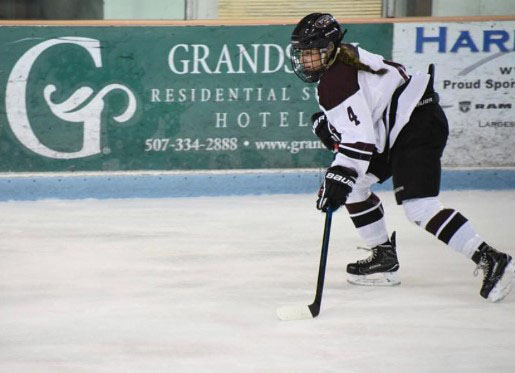 Finishing fifth all-time in assists (55), fourth in career points (109), third in goals (54) and being selected No. 2 overall by the Connecticut Whale — that’s the legacy former Quinnipiac  University women’s ice hockey player Melissa Samoskevich left behind. As Samoskevich is now an assistant coach for the women’s ice hockey team at Penn State, another Samoskevich has entered the Quinnipiac program ready to create her own path.

Madison Samoskevich, a freshman at Quinnipiac, is living on her own for the first time, managing a higher level of classes and providing herself three meals a day. But, the big difference between her and her sister is that she has no idea when she will put on a Bobcats jersey for the first time.

Madison Samoskevich is used to moving around. She went to high school in Minnesota and didn’t have the chance to come home to Connecticut a lot. When it was time to look at higher institutions, Quinnipiac just fit the proverbial bill.

“Coming closer to home was a big factor for my college decision,” Madison Samoskevich said. “Hearing my sister talk about it really just made me love it here.”

An advantage that Madison Samoskevich also has is the fact Melissa Samoskevich knows what it’s like to be a part of the same program.

“We used to train together,” Melissa Samoskevich said. “I think it was really helpful for her to learn the drive, some of the details and how things would be. I definitely tried to push her in the off-ice sense of the game because I knew that’s a big part at Quinnipiac of how we build and how we grow.”

Some of the details Melissa Samoskevich mentioned were if a player walked into the weight room with their shoes untied, it would translate into being unprepared. Also, players need to treat warm-ups the same way they treat a game or practice. Melissa Samoskevich revealed it’s the little things that often add up to the bigger picture.

Fans and the media often see athletes for what they are on the ice. In Madison Samoskevich’s case, it’s usual to see her put on a jersey, lace up her skates and compete in a fast-paced environment for 40-60 minutes. Without the hockey gear on, Melissa Samoskevich revealed how her sister emits positivity.

“A lot of people don’t realize how happy-go-lucky she is,” Melissa Samoskevich said. “Off the ice, she’ll ask you some questions, but just because she’s curious. So, I’d say laid back.”

Another thing to consider is the perspective of a coach. In this instance, both Madison Samoskevich and Melissa Samoskevich will have the experience of playing under Quinnipiac women’s ice hockey head coach Cassandra Turner. Turner is entering her sixth season as the head coach and 12th as a part of the program.

In a recent press conference, Turner was asked the similarities she sees in both sisters. Turner had quite a bit to say, and she started off by describing Melissa Samoskevich as “a very powerful straight-out skater, a lot like Madison.” She also revealed that Madison Samoskevich’s teammates call her “mammal,” while she calls her “Samo.”

Turner is impressed by Madison Samoskevich’s ability to navigate small spaces with the puck and believes her skill set will catch on with fans right away.

“You’re very quickly going to stop thinking about the name,” Turner said. “She brings her own flare to the game and is going to help our team and help our d-corps. I think this is the strongest d-corps (defensive unit) I’ve coached at Quinnipiac.”

Turner followed up by describing why it’s so important that Madison Samoskevich knows how to play at a high intensity.

“She plays the game fast,” Turner said. “She plays fast with the puck into the rush. She’s so deceptive with the puck, and she’s not afraid to take it to the net. It’s such an exciting piece because she’s gonna be on the offense, and I want her to bring that.”

Madison Samoskevich honed her skills while playing  for the United States U18 team, a successful squad that went to Japan in 2019 to compete for the world championship. When asked about her time with the team, Melissa Samoskevich described how it is about trying to grow yourself as a player heading into the college game.

“As you get older, that gap between players gets smaller,” Melissa Samoskevich said. “With Maddy having that experience, it’ll be really good for her because obviously college hockey is faster than high school hockey and more physical.”

Besides her own game and what she brings to the table, Madison Samoskevich joins a program that went 20-14-3 overall and 11-9-2 in ECAC Hockey play in the 2019-20 season. Quinnipiac also reached the ECAC Hockey quarterfinals last season, where it fell short to No. 6 Princeton 3-2 in double overtime of game three of the three-game series.

Even with all the expectations and uncertainty surrounding her debut, one thing Madison Samoskevich has for certain is how happy Melissa Samoskevich is for her accomplishments.

“I’m really proud of her,” Melissa Samoskevich said. “Not only for her accomplishments in U18, but how she’s grown as a player and person. Her work ethic has sky-rocketed and so has her confidence. I get really emotional about it, but I’m really proud of her because she is my best friend. To have her go through this experience like I did is really special for us.”