Bitten by the bug 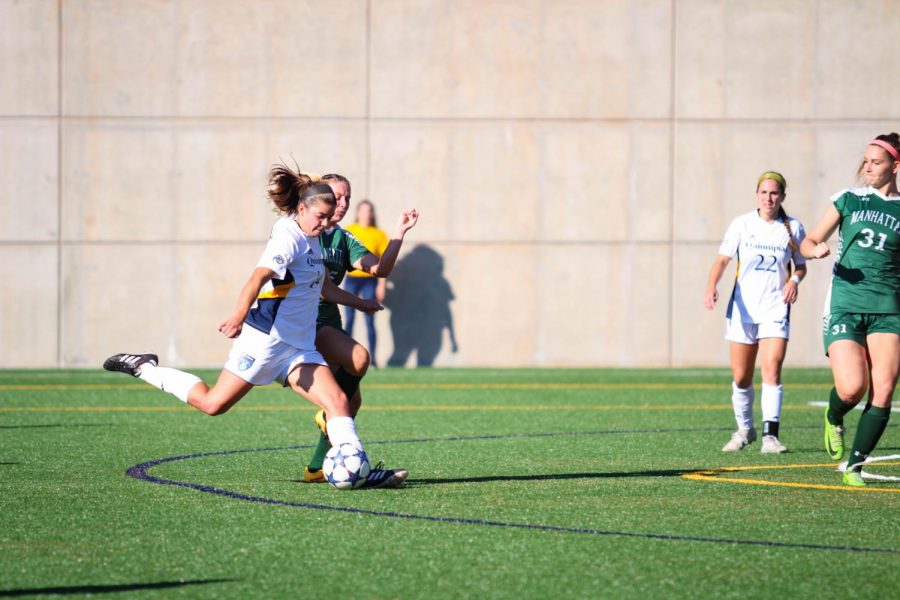 The injury bug is the one of the most feared phenomena in the sports world. There’s almost nothing more brutal than working your hardest for your body and mind to be right for the season, then sustaining an injury once play starts. Yet, it happens far too often.

The team has made it to the MAAC tournament every year since Triglione joined the team as a freshman in 2017. But she’s yet to play in a postseason game.

When the team played the MAAC tournament in Florida in 2017, Triglione was dealing with an illness. Her sophomore season was cut short due to a broken leg. Three games into her junior campaign, she suffered from illness again and was held out for the rest of the year.

But by no means should these setbacks detract from her career outlook. During her sophomore season in which she played 10 games, she was fourth on the team in points with nine, as she collected three goals and three assists.

Having proven herself to the coaching staff, she was ready to make her junior year a turning point.

“She started the 2019 season on fire, involved in a lot of our goals and build-up play and then got sick again, and we had to shut her down,” Clarke said.

Triglione was understandably upset after the loss of her third season, according to Clarke. But he said that she’s equipped to handle that kind of setback.

“She puts a lot of things into perspective, and she’s like that with life in general,” Clarke said. “Being that way as a person and then also experiencing what she’s gone through as an athlete gives her a different perspective.”

Then, of course, COVID-19 reared its ugly head. Imagine being a senior in college, ready to play out your final season, knowing that your team is poised to make its way to the MAAC tournament. Having never played in a postseason, the pandemic had to have come at the worst possible time.

But Triglione is looking at the light at the end of the tunnel.

“It’s been a blessing in disguise,” Triglione said. “I have missed time in the past and even though it stinks to not have a season this fall, I take it as an opportunity to get better. It just gives me more time to get prepped for a season. We never usually have this amount of time to focus on personal development, it’s usually hit the ground running when we get here in August and it’s team play, team play, team play because we’re gonna start games soon.”

Clarke agreed that the extra time before the season would do Triglione a service.

“She’s getting fitter, she’s getting back to being herself,” Clarke said. “It’s just a long road for her.”

Regardless of Triglione’s on-field talent, which Clarke glowed about several times, he also spoke about her leadership skills. Even though this year’s graduating class includes just four members of the women’s soccer team, the group is greater than the sum of its parts.

“She may be one of the ones that they go to,” Clarke said. “There are four leaders on the team, and Trigs may be the one that you got to with the most problems or the most problematic situation because she probably has that laissez-faire attitude to life.”

This season is still a wild card for Triglione. Even though injury may not keep her out, her major might. She’s scheduled to spend the upcoming spring semester at the University of North Carolina (UNC) as a part of its athletic training program. This poses a difficult challenge to split time between school and athletics.

“She has to do what she has to do for her major, hopefully we can work it out. If the school has to fly her up and down from North Carolina every weekend, we’ll do that,” Clarke said with a chuckle.

In today’s climate, it’s hard to picture what the world will look like in five months. It’s hard to know what it’ll look like even five weeks from now.

But Triglione sees that there’s no use in dwelling on what she can’t control. What she can control is her attitude.

“I’m thankful for it even though it’s not the picture-perfect ending I would have liked,” Triglione said.