From the stage to the screen 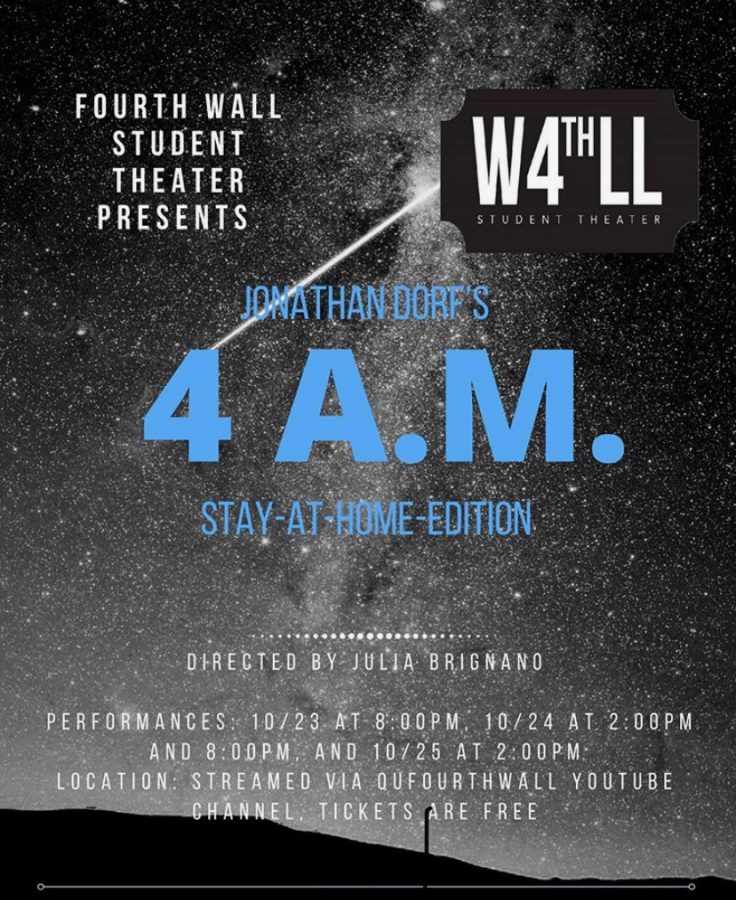 COVID-19 may have prevented an in-person audience from attending, but Quinnipiac University’s Fourth Wall Student Theater took the phrase “the show must go on” to a new level.

Adapting the production “4 A.M.,” by Jonathan Dorf, to be the “Stay-at-Home Edition,” the organization united to put on four virtual productions from Friday, Oct. 23, to Sunday, Oct. 25. The show was streamed live on QU Fourth Wall’s YouTube channel so anyone could attend, no matter their location.

On the original “4 A.M.” production’s website, the show is described as “a story about teens trying to navigate the night and their fears and dreams as they search for connection.” The director of Quinnipiac’s production, senior Spanish major Julia Brignano, said that this show helped her understand the allure of nighttime. She also expressed that as the director, she is happy with the way the shows turned out, despite the COVID-19 difficulties.

“I am so proud of the cast and crew for showing up,” Brigano said. “I’m proud of everybody who came out to audition, and of everybody who applied to be a part of our crew. The pandemic is an extremely stressful time for everybody, and to have so many people who still want to spend their time making amazing theater is so special, and I am so grateful.”

It wasn’t just the performance that had to be done virtually. Each step in the process of putting together a show had to be modified for the sake of public health.

“Everything from production meetings, rehearsals, performances and figuring out props and costumes was done without anyone being in the same physical space,” said Emma Poirier, a sophomore biology major and stage manager. “I think the biggest challenge for this production as a whole was getting that actor-audience connection through a screen.”

Poirier added that many of the features of a regular show that are typically used to aid the actors’ movements had to be omitted, too.

“The entire performance hinged on the actors alone, there weren’t any set pieces or fancy lights to enhance their actions,” Poirier said. “I think this actually worked to our advantage for this particular show because a lot of the characters are relatable, and all the actors are such great storytellers that I think the audience didn’t have trouble becoming invested with the characters, even through a screen.”

Cast member and senior theater major Nicole Gibson, who played ensemble member Michelle, jogger Stephanie and a nightmare, had a similar sentiment about the modified show.

“It was not difficult to adapt this show to a modified socially distant version since everyone was 100% on board with putting the show in an online format,” Gibson said. “It was amazing to see how everyone could still be together, whether we were at Hamden or in our hometowns.”

Gibson added that this show, despite it having to be altered to fit COVID-19 regulations, had just as much importance to her in its message. She additionally credited Brignano, Poirier and Janelle Rosales (another stage manager) with the success of the production.

“To me, the significance of the play is searching for connections at the most unexpected time and place,” Gibson said. “Everyone has gotten so close as a cast and Julia, Emma, Janelle and the rest of the crew have been so wonderful in putting this show together under unusual circumstances.”

One of the show’s all-encompassing phrases, “Is anybody out there?” reflects one of the greater themes in the production — finding ties to others even under the most unpredictable and unusual circumstances, like in the middle of the night. There are a variety of characters, all with different backgrounds and interests, who eventually find similarities among each other despite their surface-level differences.

As the show depicts, whether it be a jogger, a modern day Romeo and Juliet, a pair at a sleepover or a solitary DJ, people almost always have more than is originally perceived. Despite their different personalities, all of them face common difficulties such as sheer loneliness in the middle of the night, or even nightmares. Through a series of monologues, songs and even writing letters, the individuals expressed the concerns they assumed to be unique — but were rather universal.

The show closed with the once-lonely DJ asserting his newfound truth, a seminal message that contrasted the original inquiry, for all who feel that they are alone in feeling a particular way: “I know you’re out there.”