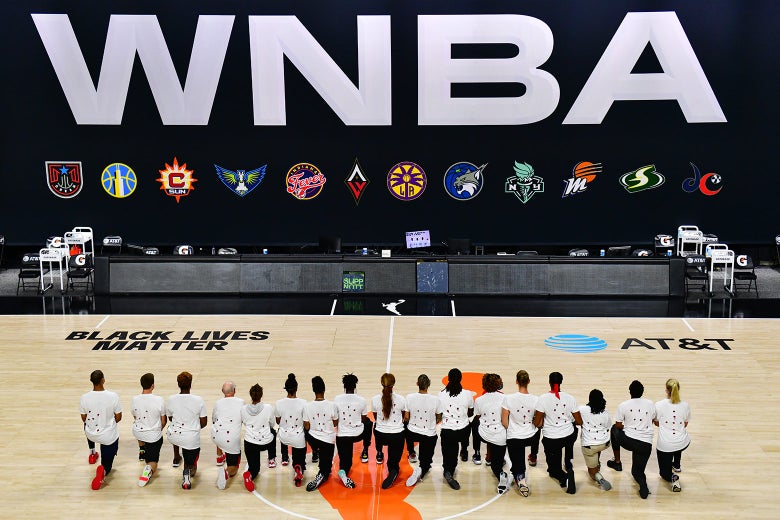 In the WNBA bubble, players wore shirts with seven red bullet holes, referencing the shots that Jacob Blake received from an officer in Kenosha, Wisconsin.

The WNBA has always been overshadowed by the NBA. The social justice initiatives it has completed are not promoted enough. At the beginning of July, the league announced that it would dedicate its 2020 season to social justice, however the league has been committed to change before 2020.

In 2016, the reigning champions Minnesota Lynx held a press conference before their game to talk about the police shootings that happened against Philando Castile and Alton Sterling in Dallas, Texas. Rebekkah Brunson, captain of the team, led the conference. Three WNBA teams were fined by the league for wearing Black Lives Matter shirts. They wore the shirts for the deaths of people like Castile and Sterling who were wrongfully killed by the police. The community and teams fought with the league for the fines to get dropped.

The next year, when President Donald Trump was furious that NFL players knelt during the national anthem, WNBA players either knelt or did not appear during the anthem. People need to realize how much courage it took for these players to voice their frustrations with the injustices that occur in the country, knowing there’s a chance they could lose their jobs. They bravely demonstrated their anger through press conferences and symbolic gestures like the shirts with powerful messages and displays during the anthem.

“What is happening now is not new,” said Brunson, who is now an assistant coach for the Lynx. “Racism and unjust phobic fear of Black males and disregard of Black females is very real. When we look at the facts, it’s hard to deny there’s a real problem in our society. If we take this time to see that this is a human issue and speak out together, we can greatly decrease fear and create change.”

Star player Maya Moore, who last played for the Lynx, has been one of the most popular athletes and proponents in all of sports when it comes to social justice changes. In 2019, she decided to skip the season and the season after because she wanted to commit herself to helping those who are wrongfully convicted. Moore started to speak out more about criminal justice reform in 2016 because of the series of police shootings of unarmed Black men in Dallas, Texas.

Moore was determined to release Jonathon Irons from prison due to his wrongful conviction. Irons was only 16 when the court tried him as an adult and convicted him of breaking into a home in O’Fallon, Missouri, and shooting a homeowner twice. He was sentenced to 50 years in prison. At the age of 40, Irons was finally released in March, and Moore is a huge reason why after she used her fame in basketball to raise awareness of Iron’s story . She and Irons are now married but are not done making changes for the future. Moore and other WNBA players need more respect for what they have done and continue to do on social justice fronts.

The WNBA’s players are not afraid to call out anybody if they think something wrong is happening. The league’s players are unafraid of having their reputations tarnished as well as sacrificing their earnings even though they do not make that much money when compared to the NBA and other women’s basketball leagues overseas that can pay players three times more than in the United States, according to The Guardian.

“Somebody like LeBron James does not have to worry about his livelihood being threatened by his activism,” said Errin Haines who spoke to CNN. “As opposed to, you know, a WNBA player who we already know was being paid significantly less, who may be marginalized for taking a stand around these issues, and whose career could frankly be threatened by speaking up around these issues.”

Atlanta Dream owner Kelly Loeffler is a United States senator who has been publicly against the Black Lives Matter movement and all of the activism the WNBA has done. The Dream players do not care and have publicly said they want to vote her out of office. Many players care more about social change than their playing careers. Players across the league and players for Atlanta have worn shirts that say “Vote Warnock,’’ who is the person that Loeffler is running against in the upcoming election. Even though Loeffler is practically the Atlanta Dream players’ boss, they do not care and would rather get released or traded than support their owner. Most average people would not openly oppose their boss. These players have courage.

The WNBA, like other professional sports, decided not to play on Aug. 27, 2020 because of the police shooting of Jacob Blake. The players did not just want to strike, they wanted justice. They all stood together wearing shirts that said “Arrest the cops who killed Breonna Taylor. They also wore shirts with Blake’s name on them.

The WNBA needs more respect now. It has been making major social justice efforts for years, but the players still do not get the admiration that they deserve. When will that change? Hopefully it starts today.