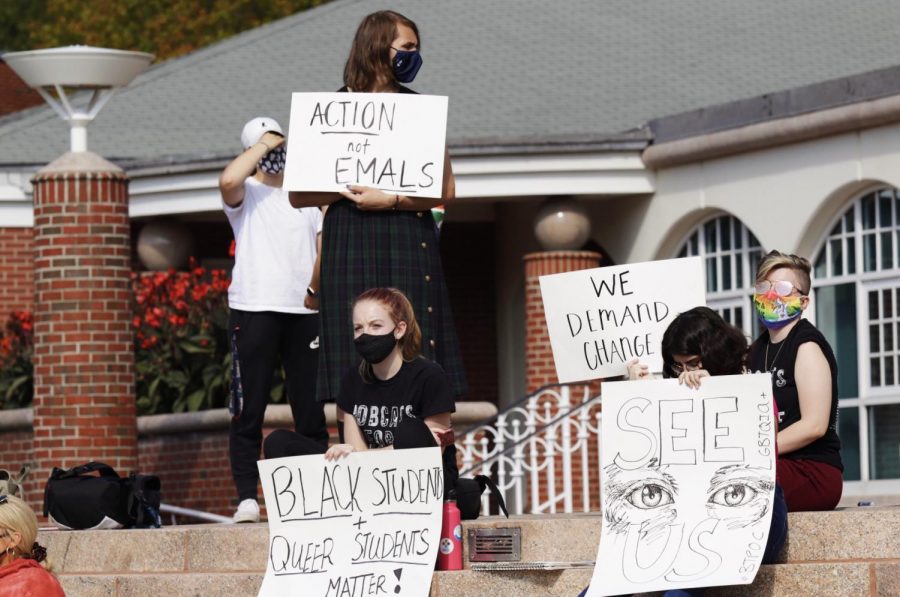 Students continued to protest for LGBTQ rights on campus.

Shawna Reed, assistant professor of biomedical sciences and vice chair of the inclusive excellence committee, said she attended the protest to show her support for the students who are advocating for change.

“I’m a firm ally to my queer students and friends and family,” Reed said. “I wanted to make sure the students knew that they had faculty support. Actually, a dozen faculty emailed me that they couldn’t come out because they weren’t on campus today.”

Athena Cuttle, senior psychology major and president of the Gender Sexuality Alliance (GSA), said she was happy to see faculty at the protest.

“I think it’s really cool,” Cuttle said. “It just added to the statement more, and it just made us feel like the statement is being heard and the faculty is here to support the movement.”

The university is in the process of creating training to educate the Quinnipiac community about gender and sexuality, according to Daymyen Layne, director for multicultural education and training.

“There are different things that are being done — that are being worked on by the administration,” Layne said. “I think we’ve seen in (President Judy) Olian’s letter that LGBT(Q) fellowship was created for a position in our office with the (Department of Cultural and Global Education), so there are things like that. I do think safe space training and programs like that help, but it’s not enough.”

In the petition the GSA released, which has over 1,650 signatures so far, the organization called for changes including adding gender-inclusive and LGBTQ housing, instituting bias training for administration and staff on campus and using the Campus Pride Index.

Layne said he understands that it can be hard for students to wait for change to happen.

“Students always want to see immediate action, and that’s not always easy for organizations or universities, but I think students just want to see some sort of change or some sort of action for their own mental sanity and personal safety,” Layne said.

The Quinnipiac community needs to become more inclusive, according to Layne. However, he said that it has to be a university-wide effort.

“It’s going to take all of us,” Layne said. “It can’t just be one office, it has to roll from the top down.”

If students want gender and LGBTQ-inclusive housing, Layne said it can be done if everyone advocates for it.

Kristen Casamento-Martin, senior assistant athletic director for academic support, said it is important to be there for students when they are fighting for change.

“Being a member of the community and working with students very closely, I think it’s really important to support the causes they want to push forward,” Casamento-Martin said. “I believe in the action and the change they want to create.”

Layne said he encourages students to use their voice to keep pushing for change.

“Students should look to agitate campus a little bit and to use their voice, which I think we’ve seen since the loss of George Floyd, we’ve seen students trying to come forward, we’ve seen Bobcats for Justice, we’ve seen QU LGBT(Q) rights, we’ve seen in a social media space where folks are trying to be that change that they want to see,” Layne said