Smile through it all

Jared Mazzola proves sometimes it's just easier to laugh it off 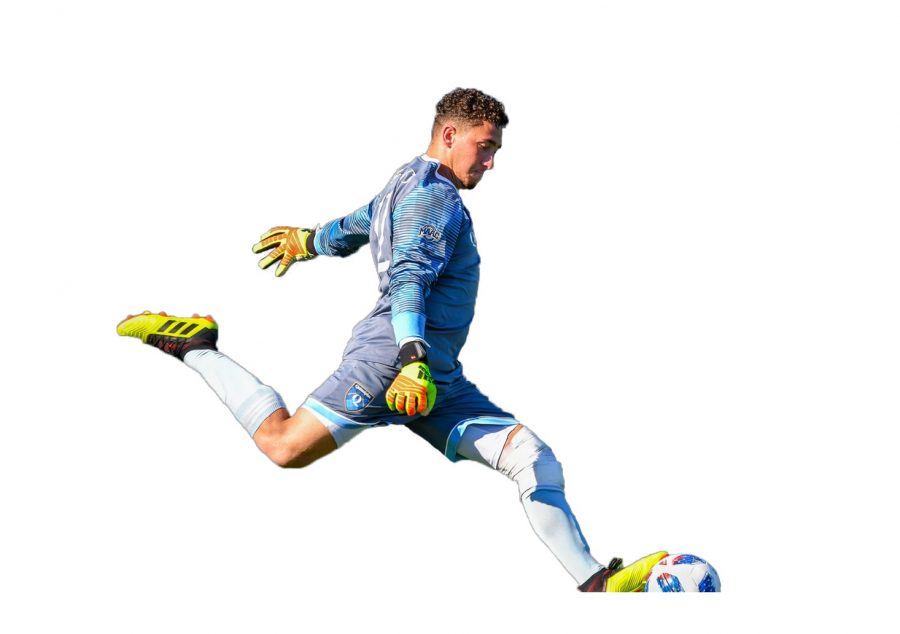 Who isn’t sick of reading about the COVID-19 pandemic? Anyone?

It’s inescapable. Sometimes it’s nice to pretend there’s a world where it doesn’t exist. Maybe have a sense of humor about it.

When asked about what he’s been doing to stay in shape during the pandemic, he put on his most convincing and serious face before answering.

“I climbed a lot of trees to stay fit,” Mazzola said.

He got the whole crowd with that one. Immediately after rattling off that quick joke, he reverted to a serious question-and-answer form.

It’s easy to tell that Mazzola isn’t exactly in his element on a Zoom call talking to four journalists. That’s really no one’s element. But the circumstances of the pandemic forces it, so Mazzola makes the best of it.

Mazzola is entering his third year with the men’s soccer team. He redshirted during his freshman season at Virginia Commonwealth University (VCU), then took off for Hamden to play with the Bobcats. He immediately stepped in, starting 14 games. That year, his goals-against average (GAA) was .89, helping the Bobcats achieve their 10-6-3 record and their spot in the Metro Atlantic Athletic Conference (MAAC) championship.

His junior season saw him really break out. Starting every game that year, he recorded a GAA of 1.31 (second in the MAAC) and 81 total saves (third in the MAAC). He took home the Defensive Player of the Week award on Oct. 21, and secured a spot on the All-MAAC second team.

His performance puts him in a position where even though he didn’t start his collegiate career with the Bobcats, he’s in line to be a key leader. You could make the argument that he was a focal point of the defense last year, but this year, there’s little question that he’s a centerpiece of the entire team.

“It’s kind of one of my first years since my career began where I’m kind of like a true authority figure, so taking on that role is kind of difficult,” Mazzola said. “Keeping everyone in check, making sure nobody slips — hold on, my dog’s drinking water.”

And she was. He got a kick out of it. Truffle, his dog, went on for a few seconds, getting her fix of water. You could tell just by listening that she was the kind of dog that makes a world of a mess when they drink water. And that made everyone laugh.

“Dude! Get out of here,” Mazzola said as he shooed her out of the room. He then continued his train of thought.

“Trying to keep everyone in check is super tough because a lot of the freshmen don’t know what the culture has been like — yo I’m gonna kill you!”

Truffle was back with a vengeance. She slurped up as much water as she could before Mazzola waved her out of the room again.

Even during a difficult time, Mazzola hasn’t lost his touch. He took something as bleak as a Zoom press conference on a rainy day and made it a pleasure for everyone. He made the best out of it.

Once Mazzola was done giggling, he talked about how the culture has changed since he came to Quinnipiac as a sophomore. Now that he’s a senior, he feels more comfortable than ever.

But he couldn’t just say that. He had to make the reporters laugh first.

“(The culture has) definitely got a lot more good-looking (since I arrived),” Mazzola said. “It’s kinda cool because people have come and gone. Different personalities add different things to the team, so when one joker left, another one came. Since I’ve came to now, it’s only gotten better honestly.”

That’s what helps about being a jokester like Mazzola. He knows when to work. Watch him on the field and you’ll see his competitive fire. But he’s exactly the guy you want as a leader.

We all forgot for a few seconds why we were on Zoom. We forgot why the soccer team has yet to touch the pitch competitively this year, and that they would have to wait until the spring to quench their thirst for MAAC action.

Even though the meeting was forced to be over Zoom and almost everything we talked about was related to the pandemic, it was easy to get lost in the conversation and have fun with it. Mazzola is the type of guy to make you respect him by making you like him, not fear him.

And all it took was his dog drinking some water.