Dave Clarke and Eric Da Costa pass on the torch from their Bobcat soccer days. 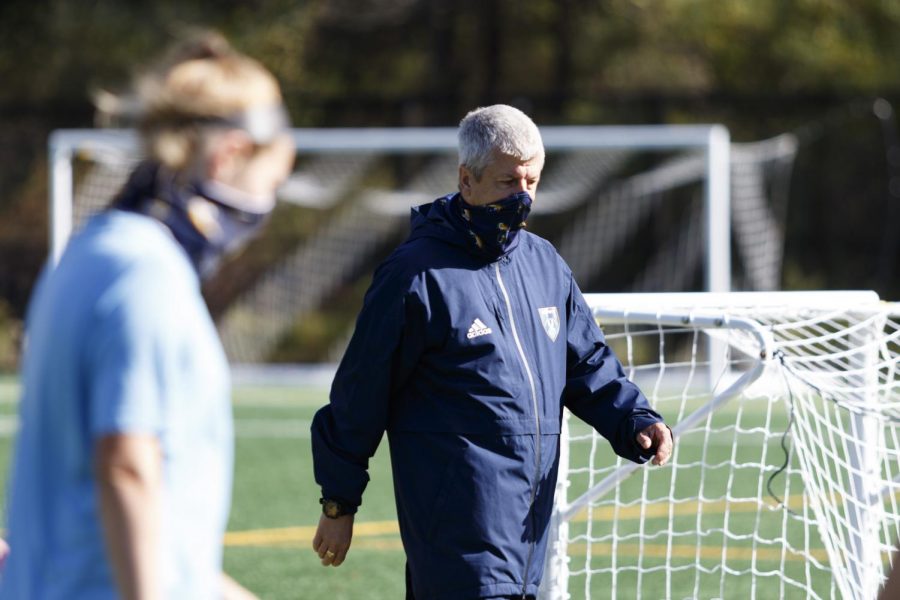 Dave Clarke has been coaching women’s soccer at Quinnipiac University for over 20 years. He began coaching at Quinnipiac in 1999, leading the Bobcats to a 16-5 record and a trip to the Northeast Conference (NEC) championship game. For Clarke, “It’s not about the wins or losses, but the moments.” He has also seen Quinnipiac change from a college to a university and move from Division II to Division I.

“It’s not really a culture shift, it’s more of an evolution,” Clarke said. “It’s taking steps to improve the university, not just in athletics but in the schools and programs as well.”

Clarke noted that one of the more pleasant changes has been Quinnipiac’s increased reputation during his time here. He no longer needs to explain where he works now that the school is a nationally recognized institution, something he couldn’t say when he first started in Hamden. Quinnipiac is not just engraved into Clarke’s life; it’s also engraved into his children’s lives. His kids grew up attending hockey games. Now they attend the university themselves. Clarke came back to school in 2010 and earned a Master’s of Science in journalism.

“I think the degree in journalism has helped me interact with journalists better, especially the students ones. I have more appreciation for journalists than I did before I was one myself.”

Clarke’s influence reaches far outside Quinnipiac’s campus. In 2008, Clarke was an assistant on the Irish National women’s soccer team when it played in the “Achieve Your Gold” tournament hosted by the United States women’s national team. In 2013, Clarke was named to the Irish Sports Top 50, which is an award that recognizes notable Irish figures in sports. According to Quinnipiac’s Athletics Website, honorees included Tom Brady, Jim Calhoun, Terry Collins, Tom Coughlin , Brian Kelly, John Mara, John McEnroe, Pat Riley and Nolan Ryan.

Clarke followed that with an induction to the Irish American Soccer Hall of Fame in March 2015, which he considers one of his proudest moments. Clarke added that having his family there for the induction only made the occasion more spectacular.

Now entering his 21st season at the helm of the women’s soccer program, Clarke touts a 180-176-38 overall record, which features a 161-160-36 mark while at Quinnipiac. Even with a young squad last season, the Bobcats won their highest number of games since 2016 and earned themselves a trip to the Metro Atlantic Athletic Conference (MAAC) semifinals. In 2000, Clarke led Quinnipiac to a NEC title and a berth in the NCAA tournament. Clarke didn’t shy away from mentioning the women’s soccer team was the first of any kind in school history to qualify for the NCAA tournament at the Division I level. Once Quinnipiac reached the tournament, it took down Loyola (Md.) 2-1 in a play-in game. After that, Quinnipiac was eliminated by Harvard in the first round.

Clarke’s impact on Quinnipiac is immeasurable. His contributions to the school and the soccer community will resonate long after he decides to retire. A spot in Quinnipiac’s Athletic Hall of Fame is within reach for Clarke.

For men’s soccer head coach Eric Da Costa, Quinnipiac soccer isn’t just his job, it’s his life. Da Costa played at Quinnipiac almost 20 years ago before he graduated with a Bachelor’s of Science in business management in 2001 and then a Master’s degree in management in 2003. During his time as a player at Quinnipiac, he was the team captain and a four-year starter. Da Costa has since moved over to the sidelines, where he’s been coaching at Quinnipiac for 15 years. He has led the team to a 116-109-52 record and a conference tournament appearance in eight straight seasons. He is the longest tenured coach in Quinnipiac men’s soccer history.

Da Costa mentions how proud he is of the way his team has handled the ongoing COVID-19 pandemic.

“It would be easy for us to look for excuses, but they don’t,” Da Costa said.

One of the most important things to Da Costa is making sure his team retains its ‘family’ atmosphere. He added that making sure there is diversity among the players, including players from all over the world, is something that is really important to him.

Even though Da Costa believes that having tradition is important, he doesn’t shy away from expressing how excited he is about how far the university has come since he first arrived. He said the university he sees now is almost unrecognizable from the one he started at, and that’s a good thing.

Da Costa mentioned that even though he’s had a lot of success as a head coach, he probably started a little faster than he was prepared for.

“If I were to go back, I probably wouldn’t do it the same way,” Da Costa said. “I probably should have been an assistant coach for seven or eight years.”

Last season, the team went 7-2-1 in league play to earn the No. 2 seed in the MAAC tournament. Additionally, the club went 9-6-3 overall, winning six of its last eight games to conclude the regular season. The Bobcats will look to improve on that record as they look toward the 2021 season.