Aryn McClure values testing her comfort zone, doing it this time in Ireland 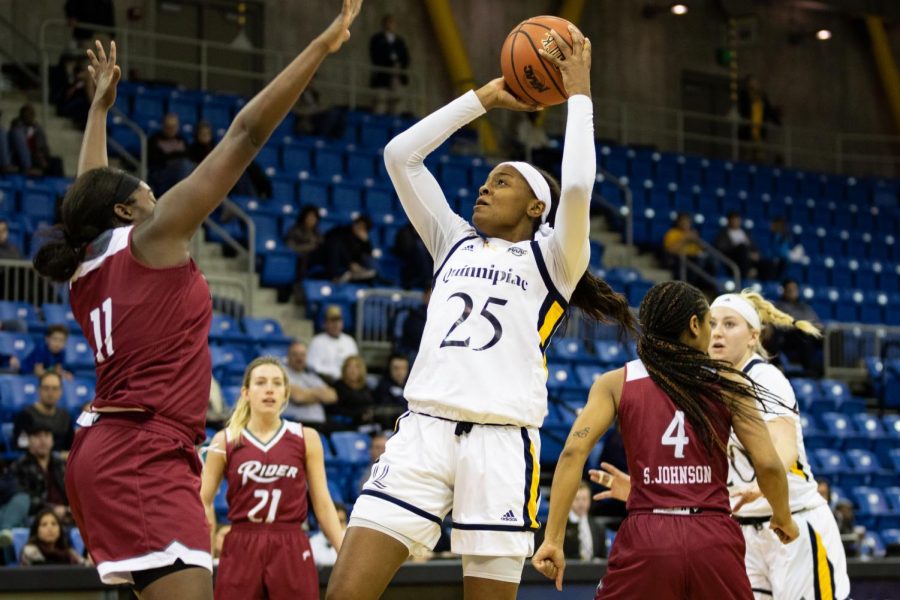 Former Quinnipiac University women’s basketball guard Aryn McClure had an illustrious career during her time in Hamden. She cut down three Metro Atlantic Athletic Conference (MAAC) tournament nets and made a Sweet 16 appearance in 2017.

McClure made a major change in her post-college life, continuing her career overseas in Ireland for SuperValu Brunell. Still, that didn’t mean that she was in completely untapped territory. Prior to coming to Quinnipiac in 2015, McClure attended Archbishop Molloy High School in Queens, New York.

“The school was 75% Irish, my best friend’s dad owned an Irish bar in Queens, lots of my friends came from Irish backgrounds, and I grew up on shepherd’s pie, corned beef and cabbage,” McClure said to the Irish Times.

When McClure first arrived in Ireland in fall 2019, she went from Dublin to Belfast, where she began working with the Sports Changes Life Foundation (SCLF). The program provides scholarships to young athletes in addition to giving them an opportunity to go to Ireland to improve their studies and sporting careers.

Being asked to join the SCLF is a prestigious honor, one that only three other MAAC players received in 2019 in addition to McClure.

“It was important to me to provide insight and build skill sets for young women here through basketball,” McClure said. “I really found passion for developing young student athletes to their potential and showing the girls in my club a different perspective than what they have been brought up on … I also wanted to show people how to expand their comfort zone and try things they hadn’t done, since that matters a lot to me.”

McClure said Edel Thornton, former Quinnipiac women’s basketball guard, can relate to her experience of moving far from home. She joked that Thornton did the “opposite” of what she just did last year, since Thronton came from Ireland to play college basketball in the United States four years ago.

“Her parents are actually right down the street from me here too,” McClure said. “So that was helpful, especially when I was transitioning.”

During McClure’s time in Belfast working with the SCLF she’s discovered there are similarities between the world no matter how far you go.

“It was the day I went to the Belfast Peace Wall that I kind of realized we have so much in common, even if our cultures are unique,” McClure said to the Irish Times.“The first thing I thought of was home when I saw it: the artwork, the political messages, they resembled the street art you would see in Queens or Brooklyn, only for us it’s all about race.”

Being reminded of home despite being so far away may seem odd since she is in Ireland, and New York is different. Although Ireland seems to be a 180-degree flip in terms of culture, her mom supported the decision.

“When she initially went I was so excited,” said Shawn Dudley-McClure, Aryn’s mom. “I had done my research and saw Cork had a big international student population, and I love to travel so I was all for it.”

In March 2019, McClure was sent back to the U.S. due to the COVID-19 pandemic and had to return to New York. While this valuable time at home was good for McClure, she felt she had unfinished business back in Ireland and wanted to return this year.

“When she wanted to go back after COVID-19, I was a bit apprehensive,” Dudley-McClure said with a laugh. “But, Aryn is the type of person who finishes what she started, which I was proud of. That is how she has always been, very diligent, organized, focused and hard-working.”

When McClure returned this time around, she found that the unique lifestyle has its benefits when it comes to multitasking. On top of playing professional basketball overseas and working with the SCLF, McClure has also started an organization called “Globally Known: Athletes Serving Athletes” which is a platform that helps athletes when it is difficult to get exposure .

“I am hoping for this to kind of serve as the middleman,” McClure said. “It can be hard for international players to get a lot of exposure, both college and pro, so this can be beneficial so they’re not as alone in the process. I realized this when I negotiated my own contract and represented myself.”

McClure welcomes new opportunities with open arms, explaining the importance of not shying away from new experiences and being able to be “comfortable being uncomfortable.”

“I think a lot of people limit themselves with potential opportunities,” McClure said. “I don’t know how long I will be staying, but I am just kind of taking it day by day, enjoying the moment and expanding my comfort zone every day. I also don’t want to get too comfortable here and stay stagnant.”

Following her impactful trip to Belfast, McClure went to Cork, Ireland, to join the Victory Scholar Program, which is what brought her there originally to play for SuperValu Brunell. The program allows her to simultaneously play and attend school for a Master’s in International Business at the Cork Institute of Technology.

The program is now in its 12th year and provides a unique opportunity to work with kids while earning a degree and playing pro basketball after college. With the competitor McClure has always been, it seems like the right opportunity for her. Just ask Quinnipiac women’s basketball head coach Tricia Fabbri about the type of competitor she is.

“She is an absolute competitor,” said Tricia Fabbri, Quinnipiac women’s basketball head coach. “She did not like to lose one drill, one game or one practice. Her compete level was second to none … it propelled us to be a great team. I still wish I had her here, even just in practice, because she was a shut-down machine defending the best perimeter guard on the other team. She couldn’t stand if someone took a possession off to catch their breath.”

While Fabbri not having McClure on her roster anymore is an unfortunate reality for the head coach, she is still ecstatic for McClure and her future.

“The competitor in her seems like, if you can still play and play well, there’s going to be a time where you are not going to have that opportunity anymore, and I love that she is finishing her master’s, and had an opportunity to go back and play.”

McClure was a starter for Brunnell in 2019-20 and averaged 8.9 points, 6.9 rebounds and 0.5 assists per game. The team struggled with a 5-13 record, but McClure was a bright spot in the starting lineup.

“It is very similar to places in the states,” McClure told the Irish Times. “It is a huge melting pot and everyone in my classes are from different countries, and with Brunell I found a family that has helped me cope being so far from home. The Irish basketball community has become my family.”