Discussion about attendance during COVID-19 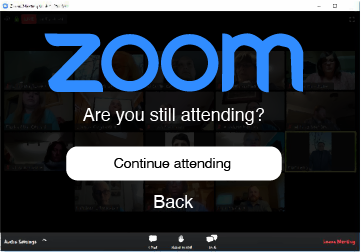 Professors from Quinnipiac University and the University of Connecticut (UConn) discussed the complications of attendance in the Zoom era by holding a virtual discussion Oct. 16.

Jonathan Torres, assistant teaching professor of English at Quinnipiac, partnered with Lois Lake Church, a first-year writing professor at both UConn and Quinnipiac. Together, they led an interactive discussion called “Showing Up: Rethinking Attendance in the Pandemic Age,” that talked about the need for advancing more traditionalized concepts of attendance. Professors throughout Connecticut went to the event to share their ideas on the topic.

The conversation covered an array of topics such as acknowledging more than oral participation as a form of student involvement, how listening is a part of student engagement, ways that professors can build a sense of community between their students to encourage further participation and how that engagement can be measured during and beyond synchronous sessions.

“When students are given a chance to participate on their own terms and are given the choice on how they best would like to participate, they actually end up participating in the way that faculty wanted them to,” Torres said during the Zoom call. “If we can think of a list of participation strategies that are not threatening or allow students to come up with a list themselves, they are more likely to move from trying to protect a space that they think is safe and in control and into a growth zone of trying something new.”

Torres and the rest of the professors shared their individual skills and tactics that help them interact with their students, despite the physical separation. One major struggle that Quinnipiac students have expressed is the lack of connection they have with their professors and peers.

“A sense of community is definitely impacted by online learning,” said Daniel Comcowich, a sophomore film, TV and media arts major. “It’s a lot harder to generate a connection with classmates online in any capacity.”

Comcowich said that being online is challenging because of the physical separation. The ability to immediately socialize with the people seated next to him is no longer available. He said he has turned to the use of social media for interaction because he cannot engage in the same behaviors he’s used in previous semesters.

“I would be open to professors trying to foster those regular-style connections with students as best as they can,” Comcowich said. “I feel like the classroom is lacking that element of connection, and I would be all for it if any effort was made in that area.”

Gabriella Martinez, a first-year nursing major, said so far, college has come with many difficulties due to the online learning format and a lack of a sense of community is just the foundation of her struggles.

“I’m a very shy person, and participating has always been a push for me,” Martinez said. “Online classes have made it even harder for me, it’s almost easier just not to participate.”

Martinez said her professors have started using breakout rooms and increased collaborative group work to help students familiarize themselves with one another inside of the virtual classroom.

“The effort professors are putting in so far is great,” Martinez said. “They are definitely pushing for us to have a better learning experience, despite the circumstances.”

Professors are also working towards building the gap between students and want to create strong connections despite the several difficulties that arise from online instruction.

“My biggest challenge is splitting my classes on Zoom and on-ground,” Torres said. “Students feel disconnected, awkward and often left out.”

Catherine Takizawa, assistant teaching professor of biology, teaches a hybrid class where she can physically work with some of her class, although some students chose to completely do remote learning.

“I do have some students whom are completely remote, but I still feel a connection to them,” Takizawa said. “I try to greet everyone as they join the zoom meeting and I have learned to recognize everyone’s voices, even if I can’t see their face on the zoom gallery, which was a nice surprise.”

Takizawa said she understands that what works for one student doesn’t always work for another and that teachers should try to vary their activities and learning strategies employed during class to keep students engaged.

“I would suggest that professors deploy a mid-term check in and ask the students what is working to enhance their learning and what suggestions students may have to improve learning,” Takizawa said. “Students oftentimes have great ideas on little things that can be implemented to improve overall learning.”