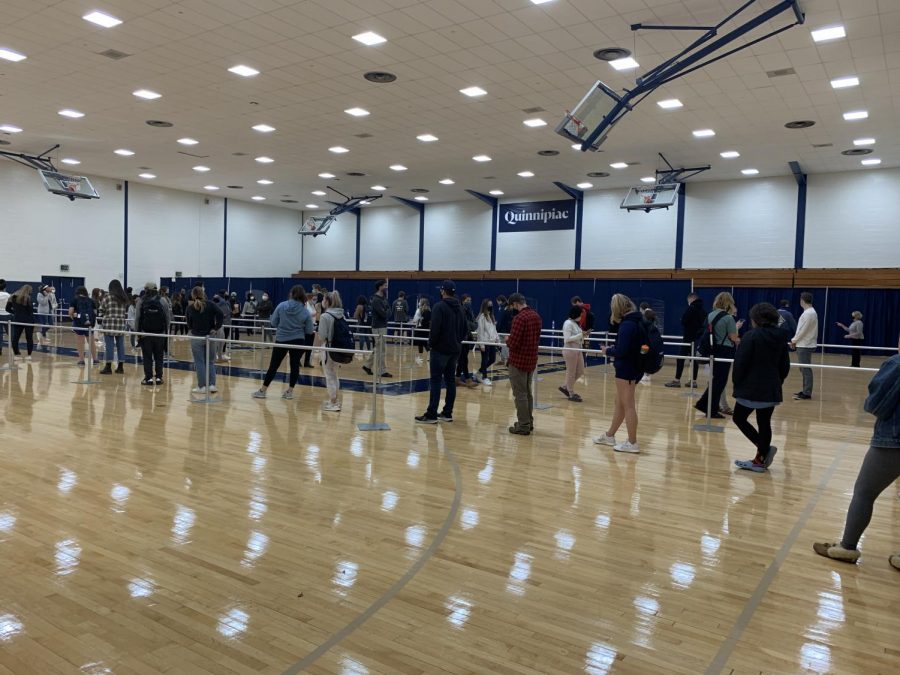 Students are not social distancing while waiting for their COVID-19 tests.

Quinnipiac University has been diligently monitoring its campuses during the COVID-19 pandemic. As a medium-sized university, it has been able to control organized cohorts for classes, sanitation protocols and limitations on activities and events held on campus.

As students arrived back to school, randomized testing began. Administration introduced this necessary testing for all students who would be visiting any of the three campuses for classes or extracurriculars.

Quinnipiac has checked some boxes when it comes to safety for students in the process of getting tested for COVID-19, but it hasn’t checked the boxes that matter the most. While social distancing is the top priority for students, they shouldn’t feel greater danger when required to stand in long lines for testing.

The university’s solution to the social distancing problem should be implementing specific time frames that will ensure sporadic arrivals and timely tests. Not to mention, social distancing will be easier to enforce with fewer people in line.

Initially, 15% of on-campus and 25% of commuter students were tested. So far, students have been experiencing long lines and negligent social distancing standards. With the university recently transitioning from a green to yellow alert level, more commuter students are being tested while on-campus residents testing remains the same.

Abby Blumenfeld, a junior political science major, who was randomly selected for a test, is an example of a student feeling unsafe while waiting for her test at the Burt Kahn Court.

“I was shocked to see so many people gathering and nobody regulating the line,” Blumenfeld said. “I expected there to be stickers on the ground for social distancing.”

Instead, students clustered together like they were used to years prior. Even when I was tested, I couldn’t even measure a foot between myself and the girl standing behind me.

The lack of urgency by the university is concerning given it is so willing to act upon those who miss their testing appointments. Quinnipiac has proven that, in a heartbeat, it is ready to punish those who do not follow testing protocol. If a student misses their assigned testing date more than once, they will face consequences such as denial to enter any and all campuses and immediate suspension. The university needs to implement this urgency while ensuring student safety on the testing site.

“The facility is way too clustered and not monitored at all,” Coscia said. “A lot of people stand on line with their friends in a group.”

Quinnipiac is obviously putting in hard work to test as many students as it can each week, which isn’t easy to do on one court in a gym. That doesn’t excuse the overcrowded lines and groups of students standing together. The university should anticipate students arriving as early as possible to get their tests over with.

Students are risking their own health and safety as well as others’ while crowding together at testing sites. Why are people who wouldn’t normally be in contact with one another being forced to herd?