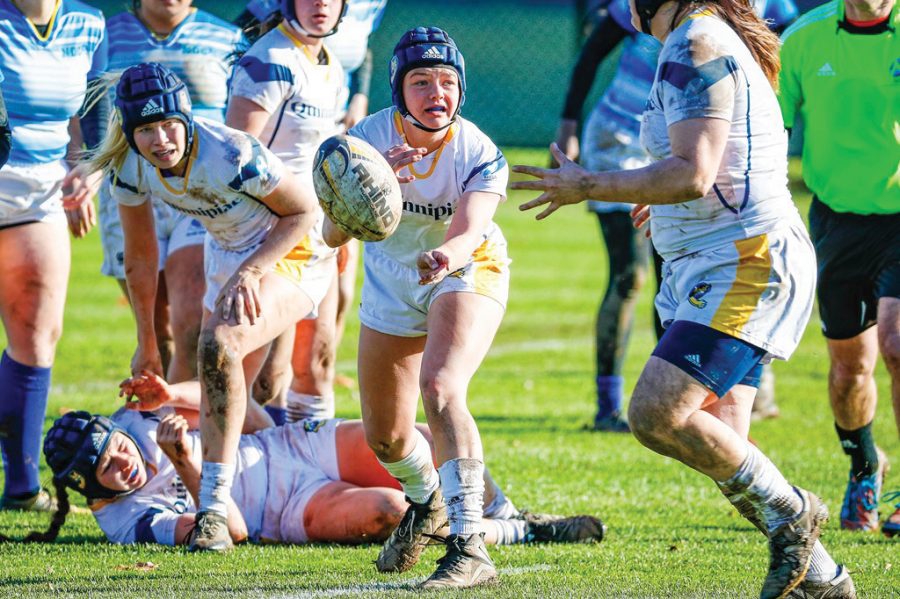 Destiny Henry plays one of the most important positions on the field.

After touring Quinnipiac University, the decision to come was almost a no-brainer.

Senior scrum half Destiny Henry fell in love with the campus and the rugby program. As a Tennessean and avid hiker, having Sleeping Giant State Park in the background was just icing on the cake.

“It popped up and then I saw an opportunity,” Henry said. “I emailed (Quinnipiac rugby head) coach (Becky) Carlson and things just kind of fell in place and I was like, ‘I think this is just where I’m supposed to be.’”

Henry arrived on campus as a walk-on standing 5-foot-3-inches tall. Despite her frame, she immediately impressed coaches.

“She came in and our strength and conditioning coach was like pound-for-pound, Dez is the strongest person coming in as a first-year,” Carlson said.

Henry came into the program surrounded by All-Americans and helped the team claim its most recent national championship in 2017. She’s seen everything in her time here at Quinnipiac from a position change — moving from wing to scrum half — to earning her scholarship and new role as a leader. Her four years have been a learning experience as she gained more knowledge of the program and was asked to step out of her comfort zone.

“It’s definitely been a growing process,” Henry said. “(It’s) had ups and downs, but I wouldn’t be able to be the leader I am if I didn’t have the leaders that were before me. My upperclassmen helped me out my freshman year, and I think that’s what I’m trying to do this year.

“I just think I’ve gotten more comfortable with being able to step up into a role and trust that I know what I’m doing and I know what needs to be done and be able to communicate that with my teammates.”

Her stats aren’t outstanding, but she plays one of the most important positions on the field.

“The scrum half, offensively, is literally involved in every single play,” Carlson said. “She has a vital role and the skill to kind of control the game and be the link between the forwards and the backs and work with the fly half and the eight man in the pack and that’s what her role is.”

Henry is a leader both on the field and in the classroom. As a 3+1 business major, she is working toward earning her Master of Business Administration (MBA) this year in addition to practicing with her teammates. Last season in her final year of undergraduate studies, Henry was one of nine Quinnipiac players to earn National Intercollegiate Rugby Association (NIRA) All-Academic honors.

“I think being selected for that team was a really big accomplishment for me because I was like, ‘Alright, the work I’m doing off the field that’s not rugby related is still being recognized and especially with my program and stuff,’” Henry said. “To have that reassurance I’m doing well in a program that is challenging with the environment I’m already in, it’s just something that gives you a confidence boost when you’re like, ‘Oh my gosh, I’m slammed with work, what am I doing,’ you’re like ‘Well we’ve done this before, we got it.’”

COVID-19 has affected student athletes around the country, and the Quinnipiac women’s rugby team is no exception. The team usually plays games in the fall and while it is able to practice, the season has been suspended. As it stands, this means Henry and her classmates will not compete in their senior season.

Henry looked at this unfortunate situation in a way that only she could. She took a lesson from James Kerr’s “Legacy,” a book about the New Zealand national rugby team, and applied it to her life. She made it a point to foster the next generation of Quinnipiac student-athletes so they too can experience what a national championship feels like, even if she may never be part of it.