Lose yourself in dance 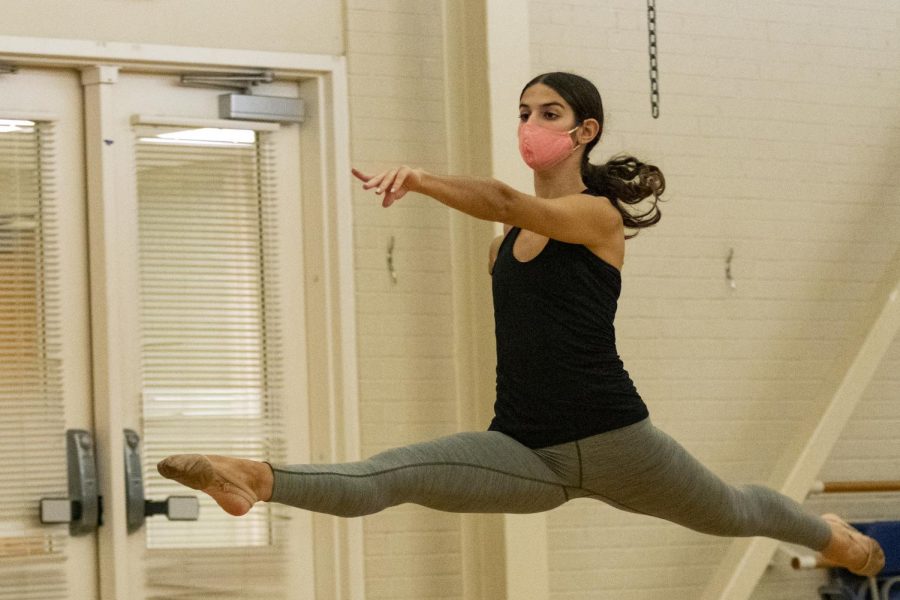 A lot of people have been to a dance recital for young kids. Maybe “recital” isn’t the right word. It’s more like entertainment for the spectators than it is a serious event for the dancers.

If you haven’t been to one in person, you must’ve seen the videos on social media. Maybe a kid does a twist here and there, sometimes they fall over, and it’s funny.

But eventually those kids are going to grow up. The sport that their parents put them in when they were 2 years old grows close to their heart. And as you’d imagine, they won’t exactly want to leave.

And can you blame them? Not many people would be willing to give up something they’ve been doing their whole life, especially when that sport is abundantly available at Quinnipiac University.

Between university-sanctioned club teams that perform at regional competitions and other on-campus clubs, there’s more than plenty to choose from. In total, there are seven teams: Ballroom Society, Club Dance, Dance Company, Dance Fusion, Irish Dance, Kickline and Tap Company.

That’s what makes dancing during the COVID-19 pandemic so difficult.

There are opportunities aplenty to itch that scratch. But now that we’re living during a time that has seen almost every recreational activity suffer, it seems like even those opportunities are in jeopardy.

The team can’t even practice all at once. Several teams are composed of a roster that is larger than the max capacity that is allowed to be in the practice room at one time. Sophomore advertising and integrated communications major Haley Gyorda, a member of the Dance Fusion team, knows what it takes from the team managers to set up these practices.

“As of right now, we are gonna be able to (practice),” Gyoda said. “We’re gonna be split into two groups. They’re gonna happen for about 50 minutes, with 10 minutes in between each group for practices. Our executive board is working really hard to figure this out with the school to comply with school guidelines and state guidelines.”

Similarly to the Dance Fusion team, the Club Dance team practices on Monday and Tuesday nights, but now each “pod” is forced to share each practice day, splitting the team in half. The two pods consist of nine and 10 dancers

For the Club Dance team, it’s easy to focus on the negatives. Even though they can’t all be in the same space at the same time, they still have lots to build on from last year.

In February, the team competed at Westfield State University, its first competition as a team since its creation at the beginning of the fall 2019 semester. To everyone’s surprise, they secured second place.

Not many people were expecting the team to pull this off, especially not sophomore English major Camryn Bernstein, who was on the team during its runner-up success.

“We didn’t really know how the judges were gonna see us, if they were gonna be able to see the chemistry that we all had together,” Bernstein said. “Afterwards, it felt like we all really accomplished something so big, because we weren’t expecting a second-place finish at all. We were all really happy and humbled by it.”

The creators of the club, senior nursing major Miranda Matuszewski and physical therapy graduate student Gianna Brusca, pursued this because they wanted something more. They had a competitive spirit that made them want to dance on a bigger stage.

“We started it up mainly because we wanted it to be run by a coach who wanted to compete,” Matuszewski said. “We wanted to have a good relationship with the basketball team and go to all their games.”

And then of course, that pesky pandemic hit. The Club Dance team certainly felt the force of the virus, as it slammed the door on nearly every one of its organized activities.

Predictably, this was not an isolated issue for the Club Dance team. The Tap Company experienced its fair share of setbacks amid trying to set dates for tryouts.

“I’ve been working on it since the summer, going to the training and talking with Campus Life, trying to figure it out,” said Alyssa LaMagna, a senior occupational therapy major and president of the Tap Company. “I think we finally got a good hold on it, so we’re starting up again.”

Having mentorship from upperclassmen when LaMagna was starting out was important for her. Knowing that eventually she would have the opportunity to take over the club, she learned the position while serving as a general member, and she’s been excelling ever since.

“Obviously I’ve always wanted to take on more of a leadership role, but this is a fairly new club,” LaMagna said. “I saw that last year was the year that the people who started the club were leaving, so I just wanted to be that person that could help keep it going. I took a lot from the past president, and I just decided to step up.”

Gyorda was a bit overwhelmed by the number of dance teams on campus. Since she danced throughout high school, she had an idea of what she wanted to do, but she ultimately did something out of her comfort zone and danced hip-hop.

Even though it was something she was relatively unfamiliar with, she still enjoyed it for one reason: the people she was with.

“Being passionate about something, it’s just great to be in the same space as people who all have the same interests as me,” Gyorda said. “Even people who are a little different, you get to learn more about people, and maybe you’ll get interested in something else, maybe go out and do different bonding events, we wanna make everyone feel comfortable. Of course it’s a commitment, but we’re all a great group of friends.”

The dance teams on campus bring these students together. Sure, you can make the argument that every club does that, and very few would be willing to disagree.

Interdisciplinary studies major Erica Jonas, nursing major Lily Heslin and journalism major Manny Galicki of Kickline, all juniors, have all been dancing since they were young. They all sat together on the couch on Zoom in their suite with a Gamma Phi Beta tapestry in the background. They reminisced on their history with the team and each other.

But it wasn’t the sorority that brought them together and led to them being roommates.

It was the pastime they’ve all been keeping up with since they were in elementary school. The dance teams at Quinnipiac offer a connection between your childhood and your future that forms lifelong bonds.

And that’s exactly the situation that these three dancers find themselves in. As the COVID-19 pandemic is still raging, some may find it difficult to join new clubs and make new friends.

But the various dance teams on campus foster an atmosphere that is more than welcoming for any who decides to pick up their pointe shoes.

“I really liked the opportunity that it presented socially as well,” Galicki said. “It was kind of a smaller team, so you got the same feeling because it’s so small and tight-knit.”