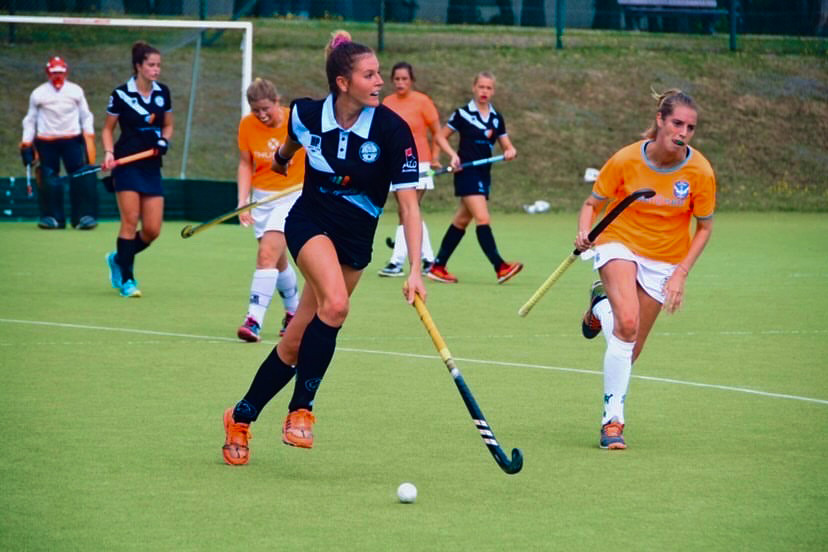 Bianca Strubbe, a 24-year-old midfielder born in Tourhout, Belgium, graduated from Quinnipiac in December 2019 with a Master’s of Science in sports journalism.

That moment marked the beginning of a new era for both the Bobcats and Strubbe.

“She brought an unbelievable work ethic,” Main said. “I don’t know if I’ll ever see it again, but I do see people try to emulate it and try to go ‘Oh, that’s what Bianca would’ve done.’ She definitely left a legacy that I’m not even sure she’s completely aware of.”

Ensuing graduation, Strubbe moved to Boston, Massachusetts, to live with her boyfriend, Chris Mills, and in March, she found a job as a “voluntary” field hockey coach at Merrimack College. Her role as an assistant coach was supposed to start in August, but was cut from a full-time position to a part-time one because of COVID-19.

So, she flew back to Belgium and began playing field hockey for Arlon Hockey Club, a professional team in Arlon, Belgium.

“Because of COVID, a lot of clubs lost South American and American players because of the visas to Europe,” Strubbe said. “So, I knew that Arlon (was) looking for extra players because they lost a lot. So, I just reached out to the coach and basically after a couple days, we found out the way that I can come to play.”

Not only has she “come to play,” but she’s been dominant thus far. Strubbe had a five-goal game and is touted as “one of the best players” in Belgium’s second division, according to Will Murray, Arlon Hockey Club head coach and technical director.

Strubbe has even earned herself a sponsorship with HockeyFit, a fitness organization represented by international field hockey athletes and coaches.

Arlon Hockey Club sits in second place in the division as of Oct. 5. A top-two finish would result in a promotion to the first division.

Similarly to the dynamic at Quinnipiac, Strubbe is once again looked upon as a leader. She’s the second-oldest player on the team, but the difference is that the 24-year-old is no longer one of the oldest players in the league.

The league consists of players ranging from ages 16 to late 30s, according to Murray.

“She’s a really good player, playing very well as well at the moment,” Murray said. “She’s embraced the team and integrated really well with it in the right way. And (she) is producing effective performances at the level for the team and herself individually.”

As Main said, her work ethic is “unbelievable,” and Murray noticed that immediately. Additionally, he noted her offensive prowess that’s imposed on opposing defenses.

“She’s very, very threatening and very direct when she has the ball,” Murray said. “It’s that assertion and the drive and the power and the hunger to really want to do the best for the team. … One thing we’ve been talking with her about is actually learning to embrace rest … and balancing that intensity just to make sure she doesn’t burn herself out.”

The aforementioned directness translates into Strubbe’s communication as well. Main said she was always the most honest and straightforward player on the roster. When Strubbe didn’t like a drill, she would say it because she believed things should be as efficient as possible.

Strubbe’s struggles don’t lie on the field, nor in her ability to be a leader. Rather, she’s on a team and in an area that primarily speaks French, but she speaks English and Polish. She started taking French classes recently but is able to speak English with Murray.

“In Poland, we speak Polish and in the U.S., we speak English, and it’s totally fine,” Strubbe said. “But here, with the girls, it’s OK. There’s a couple of them who understand English. If the rest don’t understand what me and coach say, they just ask the girls so they can translate.”

This challenge is visible and audible when Strubbe coaches the Arlon Hockey Club U14 boys team. She said that the boys don’t know English well which is frustrating, but she manages by drawing out plays and showing techniques on the field rather than through verbal communication.

The language barrier would not be an issue if Strubbe traveled back to the United States, where she wants to coach field hockey. She said she would love to return to the NCAA as a graduate assistant or a full-time assistant position as early as next season. Strubbe also said a return to Quinnipiac as a coach would be “amazing,” and Main didn’t rule it out.

“Right now, Quinnipiac doesn’t sponsor visas,” Main said. “I’d take her back in a second. But she’d have to find (a school that would sponsor her. Ivy League schools) are big on that. There’s some (Division III) schools that might sponsor her. … I’d love to have her with me, but I don’t know if that’ll ever happen. But don’t put it by me, I’ll try.”

Despite Strubbe’s passion for coaching and on-field brilliance, she expects to be looking for a “real job” in her 30s. She wants to become a sports journalist and follow in the footsteps of her father, Kurt Strubbe, who is a producer for Sportgame which is a channel covering sports in Wroclaw, Poland.

“I grew up watching him make interviews with young athletes or teams and coaches, and I just really enjoyed that,” Strubbe said. “I think with my coaching and playing experience, I think I could have a good way, good look to interview athletes just because I was there years ago.”

It’s clear that Strubbe will become a sports journalist.  The question is when will she make the transition. Main said back in October 2019 — and doubled down at the end of September 2020 — that Strubbe could play international field hockey for the next 10 to 15 years.

Murray, who played field hockey in university until a knee injury ruined his career, had similar thoughts and said his best advice to Strubbe was to play as long as she’s “physically and technically able.”

“I think in Europe, there’s a lot of ways that you can balance both playing and coaching at the same time,” Murray said.

If Strubbe plays for 10 more years, returns to the U.S. to coach in the NCAA or joins her dad in the sports journalism industry, she said field hockey would always have a place in her life.

“So, probably my next five years will be around field hockey, like very intense playing or coaching,” Strubbe said. “After that, I think I have to get my stuff together (and) find real jobs or something. … but field hockey will be my thing to do, and if I can manage both, like having an adult responsible life and can coach or play, that’s what I definitely want to do.”