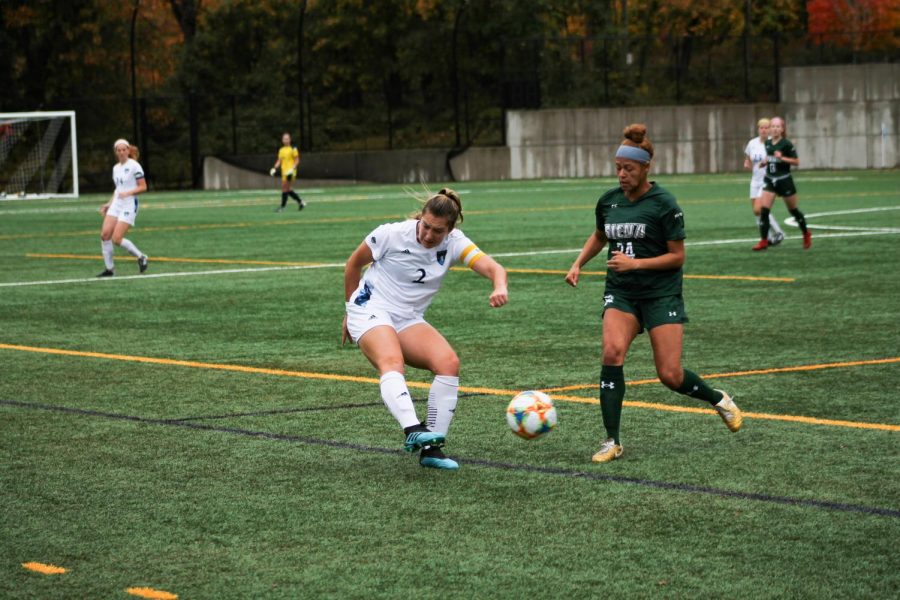 Since 1980, two defensive players have won the Ballon D’or award, given to the best soccer player in the world of that year. In 1990, Inter Milan’s Lothar Matthaus took home the award, and Juventus’ Fabio Cannavaro was honored in 2006.

In the last decade, this trend has especially been true, as either Barcelona’s Lionel Messi or Juventus’ Cristiano Ronaldo have won the Ballon D’or every year since 2008, with the exception of 2018. Of course, they’re both attackers.

Defensive players in today’s soccer climate are heavily underappreciated, both at the professional and collegiate level. Quinnipiac University’s senior defender Hannah Reiter is the epitome of an overlooked player who makes their team significantly better.
Her bio won’t show you much. Through her first two years as a Bobcat in 2017 and 2018, she recorded 11 points (three goals and five assists).

That wouldn’t be remotely flashy enough to please a Ballon D’or voter.

But where her team needs her, she steps up. Recently selected as one of four players on 2020’s Leadership team, Reiter has been a presence that the young team around her massively benefits from.

Sophomore goalkeeper Meaghan Phillips impressed in her first season between the sticks but having a seasoned veteran in front of her made her job quite a bit easier. The team conceded less than one goal per game (18 goals through 19 games).

“Hannah’s an integral part of how we play and how we defend,” Quinnipiac women’s soccer head coach Dave Clarke said. “Having her in front of or alongside a freshman or sophomore will give us a little bit more leadership.”

Clarke then described how COVID-19 has thrown a wrench into his team’s training sessions. Since protocols limit the amount of athletes that can practice at once, the team has to split into two groups. Because the team as a whole is so young, one of the groups is made up entirely of freshmen and sophomores.

“That just stands to the importance of having someone like Hannah at the back that can provide that leadership,” Clarke said.
Having someone with an athlete’s mindset is important to Clarke. Luckily for those around her, Reiter has just that.

One of Reiter’s biggest attributes that makes her a mainstay in the Bobcats’ lineup is her work ethic. She sets the example by making sure that even though she’s slated to miss a couple practices each week because of her busy academic schedule, she’ll make it right.

“She stays and does extra running, she’s not a player where practice ends and she goes home,” Clarke said. “If she misses a day, she’ll make it up.”

Reiter knows how important it is to be there for her teammates during practice.

“You don’t wanna be left behind,” Reiter said. “If you’re not putting in that extra work, when it comes time to play, you’re just not gonna have that drive and the energy to get that starting spot or get the minutes you want.”

As the team’s impending season looms this spring, Reiter reflects on what is best for the young core. Now that there’s a shred of clarity, she said it’ll be important for the team to soak up what it can before the 2020 slate rolls around.

“This year will be good for them,” Reiter said. “They’ll have one more year under their belt, and I think they’ll be good after that.”