‘A story of resiliency’ 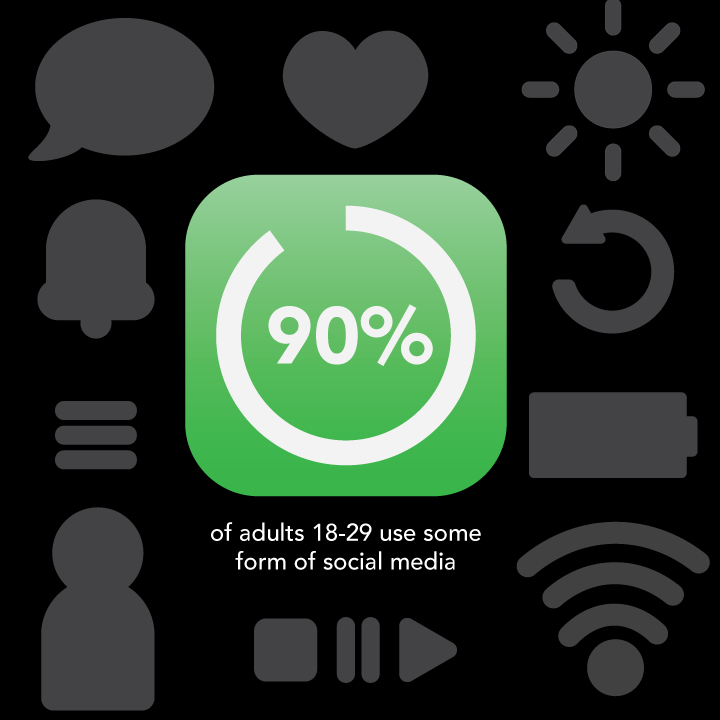 Twenty years ago, social media was a small-scale concept surrounding individual communication. Now, it is a billion-dollar industry focused on content creation, advertising and public image.

These changes have altered the way society works. The world is more connected, more vocal and more informed.

Social media and the way it is used are constantly developing. Especially amid the COVID-19 pandemic, social media is more important than it has ever been before.

For universities, social media had to encompass all a school has to offer in lieu of in-person open houses and other similar events. For student organizations, social media campaigns became a way of spreading more information about their messages. For individual students, social media became a place of connection, escape and education.

According to a survey conducted by Pew Research Center, 90% of young adults between the ages 18-29 use some form of social media. Social media has become the primary source of advertising revenue from that age group.

Director of live channels for the department of integrated marketing and communications at Quinnipiac University, Jamie DeLoma, emphasized the importance of universities having a strong social media presence.

Quinnipiac already had a strong social media foundation prior to the pandemic, but its presence has become even more important. After students were sent home in March, the university’s social media pages featured inspirational messages from professors and faculty, encouraging students as they faced unprecedented times.

According to DeLoma, the social media campaigns were used to tell “the story of resiliency” of the Quinnipiac community, whether in-person or far apart. DeLoma credits the success of these strategies to Kimberly Shepherd, the university’s social media manager.

As the pandemic has progressed, co-curricular groups have relied on social media to spread information regarding both the club itself and other educational information.

For the Student Government Association (SGA), it was important to keep the student body updated through online events like town halls and Ask Away, an open forum to discuss controversial topics such as abortion and gun control. SGA also held Bobcat Fridays as a way of boosting morale and school spirit.

“I think, especially during this time we’re in, personal interaction is so limited that our presence on social media is super imperative,” said Jamien Jean-Baptiste, vice president for public relations and marketing for SGA. “I think there are students that, obviously aren’t on campus at all times, and they want to be as much in the loop as they possibly can.”

Groups like the Student Programming Board (SPB) held events such as bingo and trivia nights over Zoom to maintain some normalcy as students continued the semester from home.

Student organizations that already had an active following both on campus and online had a different experience from those that had to get their footing in the midst of the pandemic.

Bobcats for Justice (@qubobcatsforjustice on Instagram), a group dedicated to giving students a voice to discuss their experiences with racism at Quinnipiac, came to existence.

“The Instagram has allowed us to reach an audience of alumni, faculty, students, families of students and many more which was vital in spreading awareness and amplifying the voices of those who have faced racial discrimination at Quinnipiac,” said Mary Gerdenich, one of the founders of Bobcats for Justice.

Gerdenich, a senior political science major, explained that getting engagement is much easier for online meetings in comparison to ones held in person after classes have ended for the day. She also emphasized that it is easier than ever for a group to stand out on social media.

“I see social media as such a powerful way to create connections and network, even with similar clubs or groups outside our university,” Gerdenich said. “There are many different social media design platforms that can create a unique and effective platform for your group, and I encourage groups and clubs to explore different tools that exist.”

When Quinnipiac announced that the rest of the spring 2020 semester would be online only, students were unexpectedly separated from roommates and other peers.

To combat this social isolation, several challenges took form on Instagram. One of these trends include themed “Bingo” cards that let students share what they were doing over quarantine or things they had done on campus at Quinnipiac. Another trend involved tagging friends, challenging them to draw vegetables or even Boomer the Bobcat through Instagram stories.

“I think for a while, social media just became a big friend group rather than a platform where you paraded this life that you want others to see,” said Gabriella Colello, a junior political science and law in society double major.

On the video-sharing app TikTok, young people shared videos showing the positives of the tough circumstances, sharing their tips on how they were dealing with isolation and educating each other on several topics, including COVID-19.

“I think the pandemic humanized social media and made it more real because we were all suffering through this group pandemic where everybody was lonely and stuck in their house,” Colello said. “I think it was a very human experience to go on social media and interact in the most raw, organic way.”