Voting out Trump is the morally right thing to do 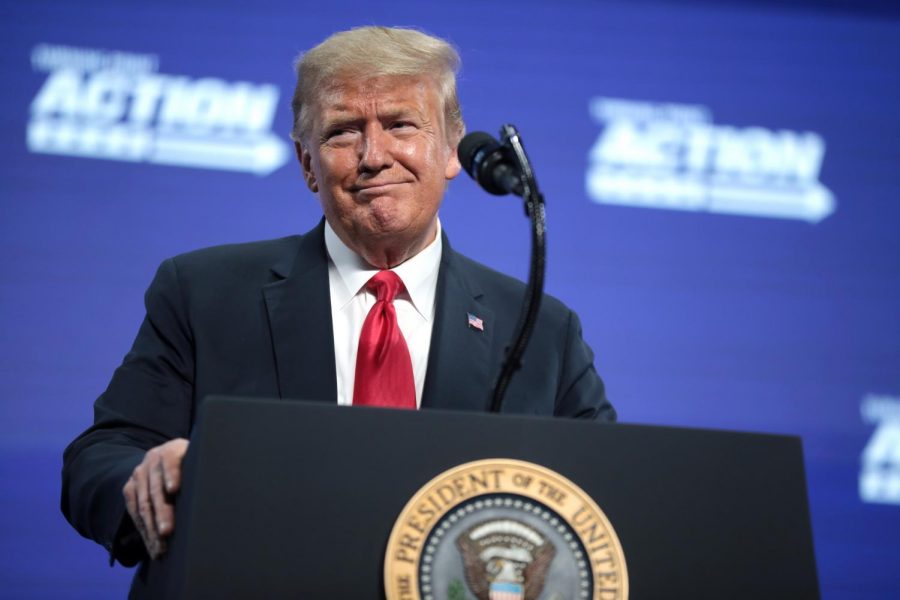 This country needs a leader who has morals — and that person is not Donald Trump.

This year’s presidential election has the potential to be more important and more controversial than the 2016 election. With the country in the middle of a pandemic and Sen. Kamala Harris being the first woman of color chosen as a vice presidential running mate, it’s important that everyone makes their voices heard this November. This year’s election is about much more than political parties. There are thousands of lives that depend on who sits in the Oval Office.

If the past four years of Donald Trump’s presidency have taught us anything, it’s that he’s not fit to run this country. From pulling out of the Paris Climate Agreement less than a year after he was elected to inappropriately responding to the COVID-19 crisis the country is facing, Trump is not the leader this country needs right now or for the next four years.

If Trump remains president, he will not do anything about climate change, an issue that we have seen worsen with the devastating wildfires occurring on the West Coast. These fires have not only caused fatalities, but they are destroying homes and causing air pollution that is further threatening the health of United States’ citizens.

Aside from the name calling and yelling that took place during the first presidential debate on Tuesday, Sept. 29, Trump was criticized for accusing former Vice President Joe Biden of taking performance enhancing drugs. In the weeks before the debate, Trump made several ridiculous accusations against Biden, including demands that Biden be drug tested. Biden has laughed off his accusations, saying that “if the president thinks his best case is made in urine, he can have at it.”

Perhaps one of the most important takeaways from the debate, however, was Trump’s refusal to publicly condemn white supremacists. During the debate, moderator Chris Wallace asked Trump to voice his condemnation of white supremacy. Instead, Trump referred to the far-right and neo-fascist group known as the Proud Boys, telling them to “stand down and stand by.”

One crucial thing to consider in this year’s election is how each candidate will respond or continue to respond to COVID-19. Trump has consistently downplayed it and failed to take any action when the virus was spreading at a fast rate in Europe and Asia. It wasn’t until mid-March that individual states began implementing stay-at-home orders and mask mandates. However, the virus had already made its way into the U.S.. The travel ban that Trump implemented in March preventing Europeans from entering the U.S. was not very effective. Because of Trump’s inability to appropriately respond to the pandemic, our country has now had more confirmed cases than any other country with 7.3 million cases and counting.

A very controversial topic is taxes. In past years, Trump had refused to release his tax returns, which led people to believe he was not paying anything to the government. There are numerous political figures that pride themselves on transparency, including Biden and Harris. They released their tax returns this year and, finally, Trump’s tax returns were released as well.

According to the New York Times, Trump’s tax returns revealed that in 2016 and 2017, he only paid $750 in income taxes, and in 10 of the 15 previous years, he paid no income taxes at all. This information led to some debates regarding wealth disparities in this country and how tax laws always benefit the rich. Trump is supposed to represent the American public, but he instead takes advantage of it.

This year’s election is about more than just political parties. Despite the different beliefs citizens in this country have, it’s important to look beyond that. Trump has time and time again proven that he is not the leader that this country needs. On Friday, Oct. 2, Trump announced that he and Melania Trump tested positive for COVID-19, showing that contracting the virus can happen to anyone. With the threat of a second COVID-19 wave, it’s important to elect a president who has an actual plan to keep the number of deaths and confirmed cases low.

At this point, the election is about basic human rights. We need a president who will represent the American public and the only way to achieve that is to make sure we all exercise our right to vote.