Behind the scenes of Quinnipiac’s testing infrastructure 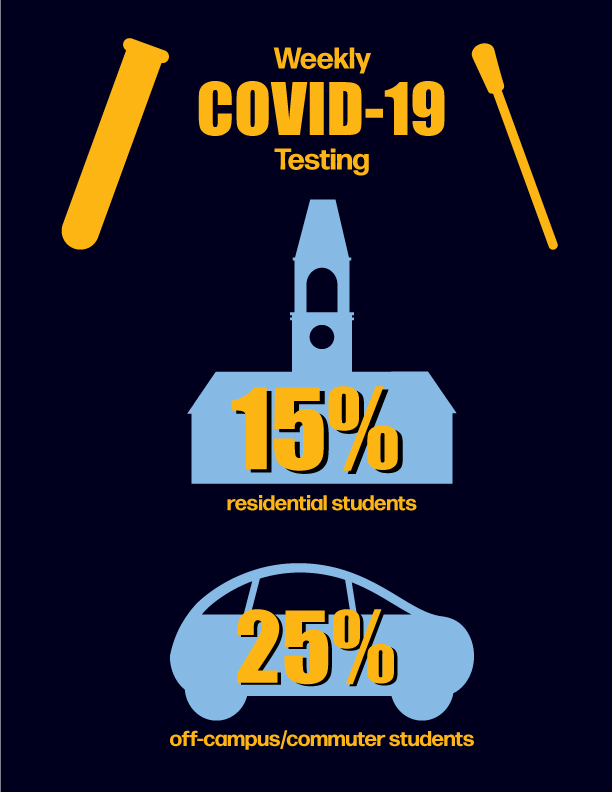 As soon as the reality of the COVID-19 pandemic’s impact on colleges and universities became clear this spring, a team of professors and medical experts at Quinnipiac University began to work on developing a testing model.

These four experts used a complicated simulation, research from previous pandemics and their own individual expertise, to launch a several-pronged strategy to identify, track and ultimately prevent cases of COVID-19 on Quinnipiac’s campuses.

The other representative from the Frank H. Netter School of Medicine is Dr. Richard Feinn, associate professor of medical sciences.

If you were ever tested this spring or summer for a reason unrelated to Quinnipiac, you may have experienced a deep swab in your nose administered by a nurse or doctor.

At Quinnipiac, students have been able to avoid this dreaded swab in favor of a saliva test before they came and a gentle, self-administered circling of the nostril upon theirour arrival.

After the first round of testing, which wasa saliva test administered through “Vault Health” testing via Rutgers University, Quinnipiac identified 18 positive cases of COVID-19. These students were not allowed to move into Quinnipiac until they acquired a negative test result.

The test used on campus is called the anterior narase test. Test accuracy is ranked on specificity and sensitivity.

Hill said that the evolving science around COVID-19 revealed that the virus can be identified not just in saliva and in the depths of the nasopharynx but also in the outside part of the nose.

The tests that Quinnipiac uses to test students on campus come from the Broad Institute, which manufactures this type of test.

“We didn’t have to administer the nasopharyngeal swab which is quite uncomfortable,” Hill said. “We could just stand and observe students do it.”

While Hill was not sure of the exact accuracy of the test given the fact that students administer it themselves, he said the test did receive emergency use authority from the Food and Drug Administration (FDA).

“The FDA emergency use authority means it hasn’t gone through the full process, but it has gone through all of the scientific analysis, which said it was fine,” Hill said.

Hill said the majority of COVID-19 tests are working under emergency use authority and assumed an eventual vaccine would be approved in the same way. The Broad tests cost $25 each, and Hill said Quinnipiac will be using these same tests again in the spring.

“You have seen the news around Sacred Heart, and the challenges they have,” Hill said. “They were not able to sign on with Broad, and it just shows that when you don’t have a robust testing schedule, you run into trouble.”

Soda has a background in disease modeling so he helped to set up a “computer game that the computer plays with itself” to identify a scenario to help develop Quinnipiac’s testing strategy.

“It allowed us to simulate individual norms and say exactly how a testing strategy would form under those conditions,” Soda said. “I had to go to scientific literature and keep and eye on developments from the World Health Organization.”

Based on his research, Soda had to estimate how many contacts an individual student would have. He made the decision to use 10 contacts per student after studying a measles outbreak at Penn State University. He also inputted the prevalence of COVID-19 in Connecticut, and how the disease spreads.

“I used the old fashioned probability and the data from the CDC to estimate how many residents had COVID by mid-June,” Soda said.

Every individual student is present inside the simulation. It simulates every day of the fall semester, and each day, the students in the model have a certain number of contacts. The model, given it’s understanding of how COVID-19 is spreads and its prevalence in the community, it estimates the number of cases.

“That covers the possibility that someone becomes infected with COVID who is not a part of the campus community,” Soda said. “For example, you go to the grocery store, you go on the bus.”

The simulation also includes blocks of code that are working to contain COVID-19. This code represents social distancing measures and other regulations that Quinnipiac put in place to contain the virus.

“Using these blocks, we can make comparisons in terms of the total number of possible cases we would expect to have on campus, how many tests we would have to run, how many people are infectious at any given time and we choose the strategy that causes the least number of cases,.” Soda said.

By choosing an estimate of 10 contacts per student to input into the model, Hill said they are planning for a little higher than the reality

“We perhaps skewed the model not for the worst case scenario to look at some of the off campus housing,” Hill said.

As the spring 2020 semester was winding down, Hill asked Feinn about the best way to sample students in the fall for testing.

“I said, ‘My question to you is, what percentage of the student population do we need to test to be confident that we are picking up signals of asymptomatic or presymptomatic COVID on our campus?’” Hill said. “I gave them that task over the summer, and they worked incredibly hard to come up with a model on how we sample students.”

Chen, who is also a demographer, uses a random sampling technique to select 15% of every floor residence hall for each week of random testing.

“We do not prioritize race, gender or any other characteristic,” Chen said. “It’s purely based on the population of the floor.”

Once the model selects the number of students on the floor, the sampling strategy switches to consider clusters by room.

“Assuming you have 15 students selected (on a floor of 100 students), we are going to sample 15 rooms out of this floor,” Chen said. “That will maximize the number of rooms we selected.”

This way, one person from every room is tested every week.

“COVID could easily pass within the rooms,” Chen said. “We want to maximize the number of rooms we select.”

Chen said that it is normal for one person from a room to be selected multiple times in a row, especially if the room has only two or three students in it. The hope is that the result of that student’s test is a good indicator of the results of those whom they share a room with.

“Each sample is independent so the history of the previous samples is not considered,” Soda said.

Once a test comes back positive, it is time for a team of professionals to identify contacts of the infected person. The team defined “contact” as s ntacts as quickly as possible.

Several students have been quarantined and isolated because of the contact tracing process, despite there only being one positive test.

“As soon as someone goes to student health services with symptoms compatible to COVID that they pick up on the symptom tracker or they just call in de novo, they are put into a quarantine space until they get the test back,” Hill said. “We also quarantine their contacts.”

The testing team said that Quinnipiac’s one positive test is significantly below what the model predicted for this point in the semester. The model predicted that by Sept. 25, there would be a median of 41 cases.

“The fact that we have such a low number of cases compared to the model means that people have been keeping to the policies we have set forth to keep people safe,” Soda said.

The team as a whole emphasized that the Quinnipiac community should not let its guard down yet.

“We have unbelievable good results,” Chen said. “We want students to keepwhat they are doing. Wear a mask and social distancing. We have very good results. Let’s not start partying or relaxing.”