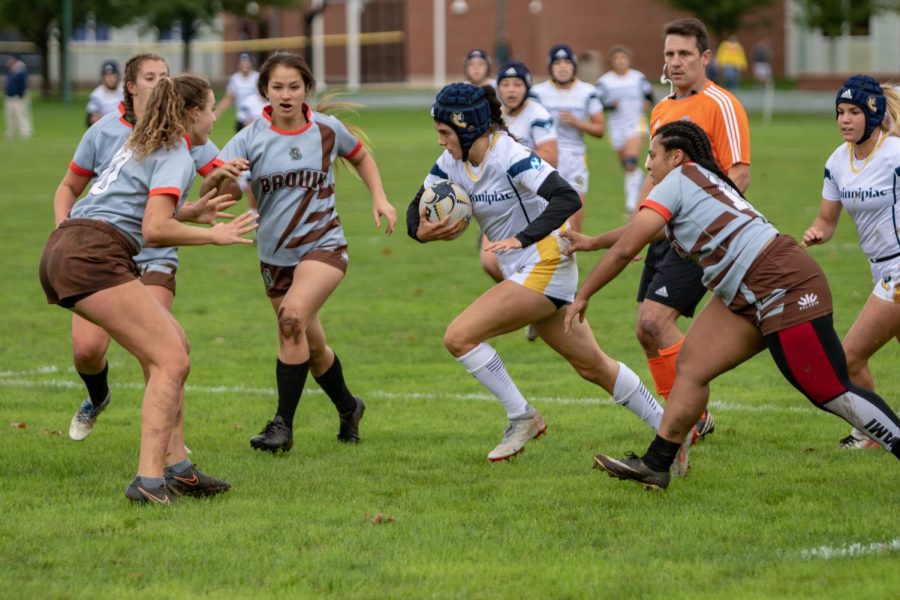 We all know the two types of parents who show up to sporting events — the loud ones and the quiet ones. Whether you’re at a college football game or a middle school volleyball match, you’ll see both of them.

Let’s say you’re at a Quinnipiac University rugby match. Junior wing Clara Lemal-Brown finds the ball in her hands, and she breaks down the middle, using her blazing speed that made her an All-American pick last year.

But one trained set of eyes in the stands sees the outside channel is wide open. Annemarie Lemal, Lemal-Brown’s mother, takes note, literally. She often approaches Lemal-Brown after the game with a written list of things she saw that could use improvement.

“It just kind of became like I had a second film session every time,” Lemal-Brown said.

This isn’t uncommon in sports. Imagine a high school baseball player who rode the bench like it was a roller coaster. After his pity at-bat he would get when the game was out of reach, his dad would immediately greet him after the game, eyeblack still on and cleats still tied to give him feedback.

And that was high school baseball advice for a kid that barely even sniffed the field from a dad that hasn’t been around the game since his letterman days.

In Lemal-Brown’s case, she’s getting advice from a college rugby coach who has been calling plays at Colgate since 2009. Since she was in high school, Lemal-Brown was hanging around the team, learning from her mother and her players.

Then there’s the other type of parent.

Lemal is also a figure skating coach at Colgate. In her days as an ice skating professional, she’s seen plenty of parents that do a little bit more than some other parents.

“In Lake Placid, the moms would sit up in the stands eating donuts and drinking coffee, just screaming at their kids if they ever tried to take a break on the ice,” Lemal said.

Lemal-Brown noticed the parents making a ruckus as well.

“They showed in fur coats, mink scarves, weird headbands that are made out of, like, squirrel fur or whatever,” Lemal-Brown said. “Just the most expensive, non-humanitarian outfits on the planet. ‘Why aren’t you doing this better? Be better, be faster, be stronger!’ And they are like seven!”

Lemal made sure to clarify that these parents aren’t bad people.

“Skating at a competitive level means that parents need to be invested monetarily, psychologically and with their time, often driving great distances or even sending their child to live somewhere else to train,” Lemal said. “Because of this pressure and investment, there is in turn an onus on the coach to turn their child into a champion.”

But when it comes to Lemal and her daughter, there’s a different approach. Some of the figure skating intensity is there, for sure. But the two have formed a strong bond through rugby and continue to stay connected despite the distance.

Lemal-Brown, hailing from Wooster, Ohio, made the decision to come to Quinnipiac to play rugby, influenced by spending time with her mother’s rugby team. Lemal enrolled her daughter in a two-day rugby camp when she was little, but Lemal-Brown didn’t end up pursuing it because there were no club teams around Hamilton, New York, where they lived at the time.

But it was inevitable that Lemal-Brown ended up on the rugby field somehow, and that time came during her sophomore year of high school.

“I really encouraged her to come to my practices, so that it would give her some structure after school,” Lemal said. “She would meet my players in the gym, so she really started falling in love with the sport then.”

About a year later, around the end of Lemal-Brown’s junior year, a high school team started up in Syracuse, New York, an hour away from their house. Lemal began driving her daughter to and from practice.

With the attention that she was getting from the sideline, not even in a uniform, both Lemal-Brown and her mother knew that venturing to Connecticut was fully on the table.

“I was always the mom that went on tour with her when she competed internationally,” Lemal said. “She went to the World Games in Paris, and she competed in Las Vegas, all the big international invitationals. It was a lot of fun because I wasn’t actually coaching her then, but I also, as a coach, knew the game. It was just nice to be able to be a presence with her in a sport that we both loved, so it was a lot of fun.”

Even on the sideline of a college team running water out to the players, Lemal-Brown was turning heads with her speed. As a high schooler, she was faster than every player on the college team.

And she was wearing L.L. Bean boots.

“The head of the tournament was so impressed with her that he gave her an All-Tournament jersey at the end, and he said ‘I just know you’re gonna be an amazing player,” Lemal said. “She was maybe 12, 13 years old, but she was so fast. He was just blown away by her speed.”

Naturally, Lemal-Brown made the decision to take up rugby as soon as it was available to her. And, as you’d expect, it brought her and her mother together.

“My mom loved it,” Lemal-Brown said. “She was all in on it, which added another layer because she knew a lot of coaches in the sport. She was very eager to lead me to the highest level possible, even just starting out.”

So of the two types of parents, which type is Lemal?

It’s tough to say. Does she support her daughter with all she has? Of course she does. Is there a little bit of pressure on Lemal-Brown to be the “prodigy child?” Maybe.

She has an attachment to the sport that few other parents of the game have. She brought her daughter into the game and watched her blossom into an All-American star.

“I feel very close with her,” Lemal-Brown said. “I know if I ever have a doubt in my mind (about playing rugby), she’ll ask me a million questions, but I love that. She tests me a lot and I learn a lot from her because she makes me think about everything.”