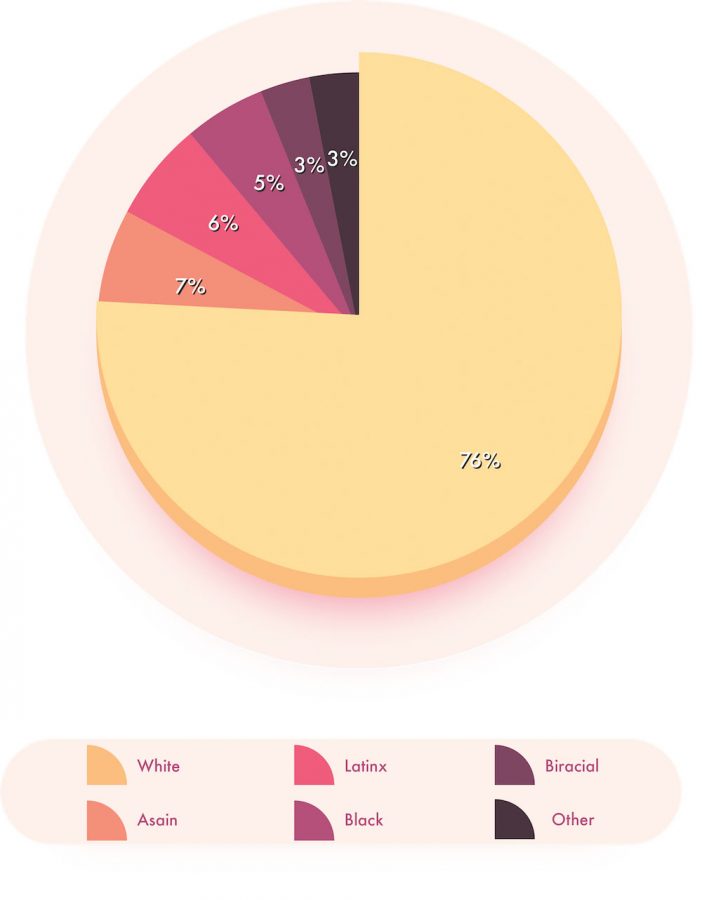 Design by Connor Lawless (stats from Lee and Low's)

“To Kill a Mockingbird.” “The Adventures of Huckleberry Finn.” “Of Mice and Men.” Do these titles sound familiar?

These are all pieces of literature commonly assigned in high school English classes, and the plots deal with the lives and experiences of one or more BIPOC (Black, Indigenous and people of color) individuals.

However, all three of these texts were written by white authors. As a white person, I still recognize the importance of hearing from diverse voices, and I see the problem with the prevalence of white authors.

Think about the courses you’ve taken so far, in both high school and college. How many pieces of literature assigned in your English classes were written by people of color?

If you’re like me, the answer is “not many.” Most of the “mainstream” books and literature pieces we read in class were written by white authors. It was only in higher-level English courses, ones I had to actively choose to take, where I was assigned literature written by BIPOC authors.

There’s no better time than now to modify your reading list to include works penned by people of color. Whether it be a fictional novel, a scholarly essay or a personal narrative, it is important to read and learn from the perspectives of those who have been historically silenced.

In a longitudinal study carried out by independent publisher of multicultural literature Lee and Low Books, statistics show that over the course of four years, the publishing industry was just as white in 2019 as it was in 2015. Not only are authors of color published incredibly less than white authors, but they are also not being promoted as often as white authors.

In short: the publishing industry is overwhelmingly white.

“The life experience and biography of BIPOC authors is sometimes related to struggles against racisms and colonial legacies that still shape much of our lives today,” said Dr. Marcos Scauso, assistant professor of political science at Quinnipiac University. “BIPOC authors often have the agentic capacity, empathy and sensitivity to show issues of injustice that might remain more hidden to others.”

Scauso, an author himself, has firsthand experience with the struggles of authorship.

“As an immigrant in the United States, I had to overcome obstacles that others might not even imagine,” he said of his path to being published.

His most recent book, “Intersectional Decoloniality: Re-Imagining IR and the Problem of Difference,” considers the diversity of oppressive experiences and aims to “assess diverse ways to think about ‘others’ while also emphasizing the advantages of decolonial intersectionality,” according to his website.

It’s especially important, therefore, to read from the experiences of those whose voices have been continually suppressed. The problem is enhanced when discrimination is perpetuated based on factors — varying by each individual — including, but certainly not limited to, socioeconomic status, access to education and geography.

“Besides the hurdles of immigration, sending translations of documents to get accepted into graduate school in the United States, proving that my Argentine university really existed, and so on, being an author continues to be difficult,” Scauso said. “Those who have experienced the consequences of axes of power based on sexuality, gender, ability, ethnicity, race, religion, class and so on tend to understand the difficulties of inequalities and they also tend to think about alternatives.”

That’s not to say that you can’t read classics like “To Kill a Mockingbird,” or that these books should be banned, but rather that it’s imperative to consider the point of view when reading literature like this.

“A white body can never capture the truth of what it’s like to live moment-to-moment in a place of hardship — in a place of marginalization due to the absence of whiteness,” said Marissa McKinley, assistant teaching professor of English. “So long as white authors speak for and from the BIPOC perspective, they act as an oppressor.”

McKinley is actively working to enhance BIPOC voices in the First Year Writing Program at Quinnipiac, as well as advocate for open-access materials, since availability of literature written by people of color is severely limited for a multitude of reasons. She emphasizes that it is on us, as well as educators, to learn about racial and ethnic disparities and inequalities experienced by BIPOC individuals, and to go a step further and act on our concerns.

“It is through repeated exposure to BIPOC voices that I, along with other educators, can cultivate ethically-minded, socially responsible citizens who show compassion and act on their concerns for their BIPOC neighbors,” McKinley said. “I am among this privileged group as a white teacher-scholar. It is my job to acknowledge my own privileges and to use my position in the world and in the classroom to help share the voices of BIPOC authors.”

“The book details the lived experiences of six women as they work against linguistic privilege and marginalization,” McKinley said. “As an East-Asian woman herself, Gloria carefully exposes her researcher subjectivity and discusses how English was and is a symbol of access for the women and further, how their pursuit of equity is layered in linguistic, social turmoil. The book is a model for those interested in critical female reflexivity and linguistic privilege.”

Scauso recommended “Orientalism,” by Edward Said, a Palestinian American, which focuses on the “narrow” understanding the West has of the East. He also recommends “The Racial Contract,” an essay by Charles W. Mills, who “unveils many of the limitations of theories that still rule much of our lives today.”

Finally, Scauso suggested students check out “any of the works by Fausto Reinaga and Silvia Rivera Cusicanqui” for those who read in Spanish, though an article by Cusicanqui in English, “Liberal Democracy and Ayllu Democracy in Bolivia: The Case of Northern Potosí,” is another must-read.

If you’re looking for award-winning works of fiction that you can read to support BIPOC authors, check out “The Poet X” and “With the Fire on High,” both written by Dominican American Elizabeth Acevedo. I also highly recommend reading the short story “Recitatif,” by the renowned Toni Morrison, if you’re looking for a thought-provoking story that makes you question your own biases and judgment.

Read away, but be mindful of who is doing the storytelling.

“Those of privilege must see it as their ethical, moral responsibility to show up and listen to marginalized voices,” McKinley said.