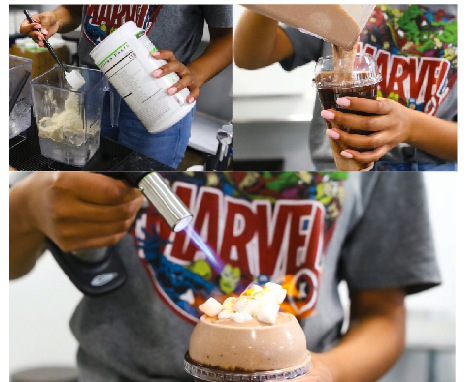 Ever since Quinnipiac University students returned to campus for the fall 2020 semester, photos of U Nutrition shakes and teas have swarmed Instagram feeds.

U Nutrition, a nutrition club that opened up on Whitney Avenue in May, is owned by two 19-year-olds, Jaslin Johnson and Jasmine Soto. After working at Johnson’s mother’s nutrition club in Shelton, Connecticut, the two owners realized they could open up their own shop after graduating high school.

“I think we picked Hamden because, well obviously Quinnipiac is right there, so we knew it would be a big hit and we just like the community,” Johnson said.

U Nutrition sells both shakes and teas. According to its Facebook page, each shake has 24 grams of protein, 21 vitamins and nutrients and is under 250 calories. Johnson said they use soy isolate protein, which is a plant-based protein.

“It’s a way better alternative than a non-vegan option,” she said. “It’s just ice and water. We don’t use any dairy or anything like that. It tastes more like ice cream rather than a protein shake.”

The teas are natural green teas that are made with aloe. According to U Nutrition’s Facebook page, each tea boosts metabolism, burns calories and increases energy. Each customer gets a tea when they order a shake.

“The reason we do the shake and the tea together is because the shake has the vitamins, nutrients, the meal replacement and then the tea has all the stuff in it to help you digest properly, everything that you’re intaking with the shake,” Johnson said.

John Opie, a masters of business administration student at Quinnipiac, is happy with the amount of nutrients each tea and shake provides.

“The teas are full of B12 energy and electrolytes that are sure to boost metabolism and keep you hydrated,” Opie said. “Now don’t forget about the shakes. They have so many flavors, and they are all so yummy.”

Dana White, clinical associate professor of athletic training & sport medicine and a sports dietitian, said that when going to nutrition clubs such as U Nutrition, students should know that these shakes and teas are not actual food replacements.

“In general, being a registered dietitian, I think people should eat food,” White said. “I think to tell these nutrients the way that they seem to be, I’m afraid misleading because I think some people think they’re actually getting food out of the deal but they’re not. They’re getting these neon colored teas that have fun mixes … I think that the food is missing from the picture.”

By being close to Quinnipiac’s campuses, Johnson and Soto hope to offer healthy options to college students.

“You want something good, but that you won’t get freshman 15 from,” Soto said. “… (U Nutrition) is literally like two seconds away (from campus).”

Along with offering healthier options, Johnson and Soto are aware that by being young owners, they can relate to their college-aged customers.

“Since a lot of the people that come in are Quinnipiac kids, we’re like their age, so we relate to them a lot,” Soto said. “So we try to make it a party.”

Though for all customers, Johnson and Soto want to make them feel comfortable, like they’re back at home.

“We want them to feel kinda like we’re best friends, like if they need somewhere to chill, cry, laugh,” Johnson said. “For real, because I listen to them and I’m like, ‘You know, me too girl. I’m going through it too.’”

Quinnipiac students appreciate the effort the U Nutrition staff put in to getting to know their customers.

“I go because it is a really friendly local business that has great customer service and a variety of products,” said Mia Lambroff, a junior nursing major.

Because of the $1 off deal when you post a picture of your U Nutrition shake or tea, Quinnipiac students’ social media accounts have been filled with these photos. Johnson’s mother used this deal at her shop in Shelton after being offered an ad deal.

“(My mother) had been doing it for a while so I think she just noticed that it was the smartest market,” Johnson said. “Because everyone was posting (shakes and teas) anyways and most of the time they’re like, ‘Oh my gosh, yes I was going to post it anyways.’”

By being so close to Quinnipiac, this $1 off deal has worked to Johnson and Soto’s advantage. Quinnipiac students see their peers posting pictures of these aesthetically pleasing shakes and teas, making them want to go to U Nutrition themselves.

“Every time a new person comes in, we ask them, ‘How did you hear about us?’ and every single time, it’s social media,” Soto said.

Because Johnson and Soto opened Hamden’s U Nutrition in May amid the pandemic, the beginning of their journey as business owners was tough.

“We opened dead in the middle of coronavirus,” Johnson said. “The governor, he put an 8 p.m. (curfew) and it was so stressful (in) the beginning because we were like, ‘What are we going to do?’”

However, since the fall semester began, Johnson said Quinnipiac students “gave them so much hope and life.”

“… You helped us a lot,” Johnson said of Quinnipiac students, “We love you guys. We want you guys here all the time. The whole school. Every single one of you.”