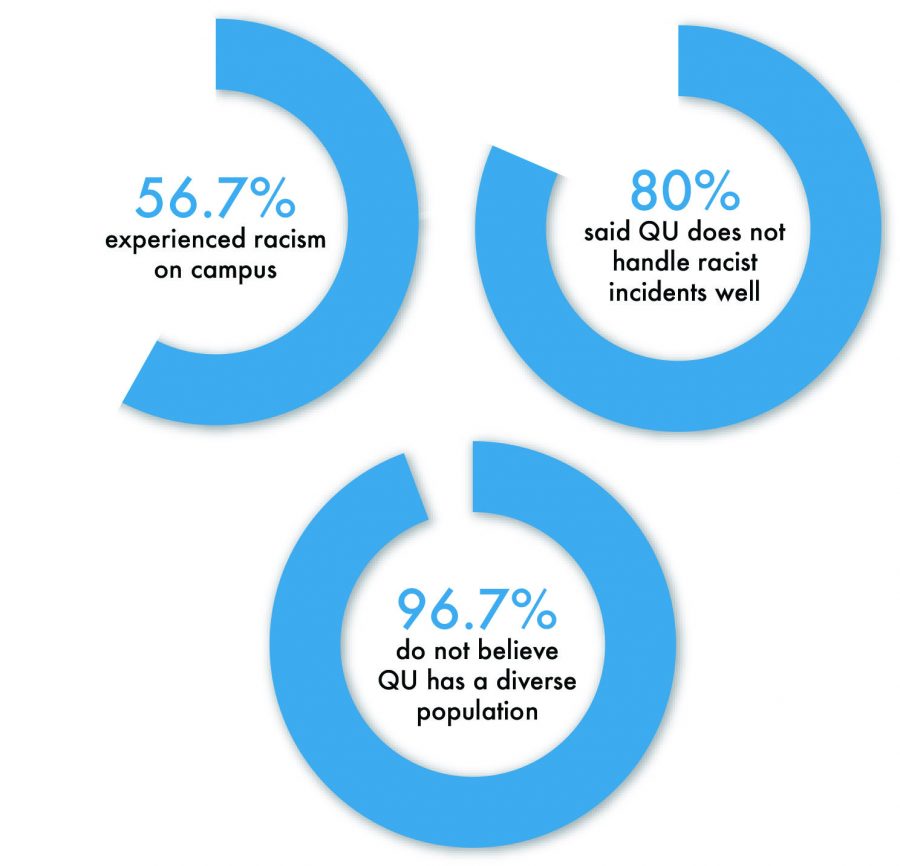 “We would like the Quinnipiac community to be open and understanding of Asians, to learn about our diverse cultures and history, and to educate themselves on the racism and stereotypes we experience,” said Carrie Zeng, senior psychology major and co-president of the ASA.

Jason Koo, associate teaching professor of English, said he was concerned about the safety of Asian students on campus due to people blaming China for the COVID-19 pandemic. Some people even use derogatory terms such as “Chinese virus” and “Kung Flu.”

“I hope the university continues to bring greater awareness to the specific problems Asian and Asian American students face, especially during the pandemic, as these problems are often not seen as ‘problems,’” Koo said. “Racism against Asians and Asian Americans is much more likely to go unnoticed or played down.”

The ASA surveyed 30 Asian American Quinnipiac students in August about their experiences with racism and how they feel the university handles these issues.

In the same survey, 96.7% said they think Quinnipiac does not have a diverse population. In terms of how Quinnipiac handles racism, 80% of the students surveyed said the university does not handle racist incidents well.

“We hope that Quinnipiac will hold students and faculty accountable for any racial incidents, as well as educate students and faculty/staff about racism against Asians,” Zeng said. “We would like to change this mindset and speak up about racial injustices because we are tired of it and hope to educate others about this.”

Students may struggle to report “the stuff that’s ‘not that bad’ compared to physically violent or overtly abusive acts,” Koo said. He also said he hasn’t witnessed many racist encounters against students, but brought up how the Instagram account @qubobcatsforjustice has been shedding light on the racism students deal with privately.

“The things that are said in dorm rooms and at parties and in other social spaces outside the classroom are deeply alarming to me, because a lot of that seems difficult to report and might be difficult for the university to crack down on,” Koo said.

In June, a first-year student, Bridget Bognanno, was exposed for a racist Facebook post about COVID-19, blaming “all those involved in China with starting this.” There was a wide-spread response, demanding action to be taken against this student which caused fora petition to be created that ended up receiving nearly 5,000 signatures, calling for Quinnipiac to support its students of color.

Boganno’s punishment was never addressed publicly, but Zeng said the ASA had a meeting in which they found out more about the case. For privacy reasons, the ASA can’t discuss the details of the case, but Zeng said there was clarity about what happened.

“We also understand that change does not happen overnight,” Zeng said. “We have to be patient and trust the process. Quinnipiac has come a long way with change and we believe that Quinnipiac will continue to adapt and pursue changes for the better, even if it is in small stages over time.”

Koo said ignoring microaggressions that Asian students have to deal with can lead to larger problems down the line, such as hostility or violence.

“Microaggressions are actually a very big deal, because they reveal the racism that’s systemic, that’s so ingrained it’s not recognized as problematic,” Koo said. “I think making reporting avenues as clear and efficient as possible for students in the event of any abusive speech or act will go a long way toward making this campus safe.”

Zeng said the ASA hopes the Asian community on campus receives support from its peers. She said the organization wants the Quinnipiac community to be willing to learn about its members’ experiences and cultures.

“We are not a ‘disease’ and shouldn’t be treated like one,” Zeng said. “The racism you hear should not be taken as a joke and our culture is not a trend. We hope that we have support from fellow students and faculty, but we also hope that they are in support of all races, backgrounds and identities.”