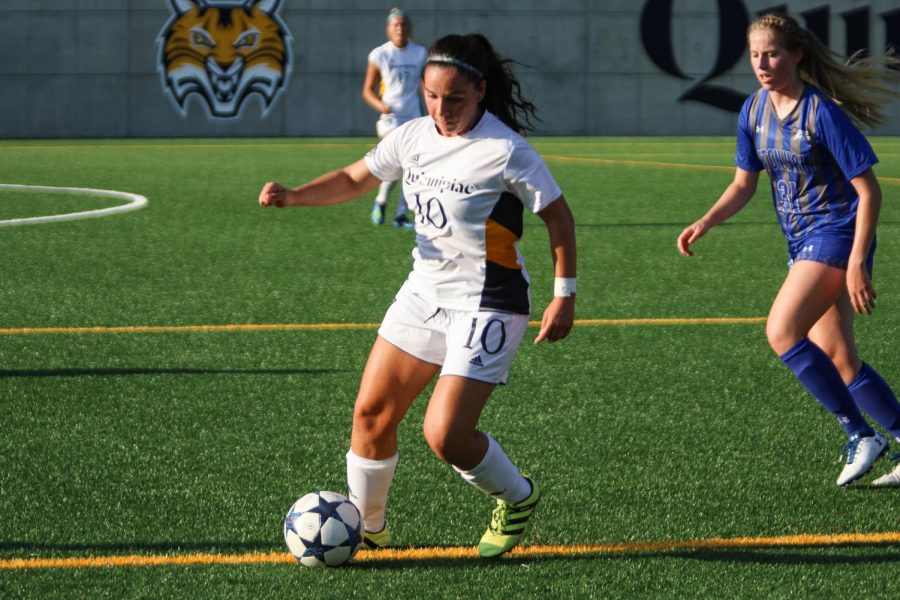 Cooking, exercising and practicing are things one may call customary in everyday life. For Quinnipiac women’s soccer junior forward Selena Salas, those have become the three primary activities in her daily routine.

What a difference a year makes, as last November, Salas was at the forefront of the Bobcats’ chase to a Metro Atlantic Athletic Conference championship. Salas scored two goals to help Quinnipiac defeat Marist in the MAAC quarterfinals. She finished the 2019 season leading her squad in points and goals with 16 each. The Bobcats also finished their season with a 10-8-1 record, the best record they’ve had since 2017 (9-7-1) and went 5-4-1 in the MAAC.

Despite that, nothing is certain as progress has come to a halt. Salas should be in Connecticut preparing for her third season with a goal to bring home a championship. Instead, MAAC commissioner Rich Ensor announced in late August that fall sports would be postponed. 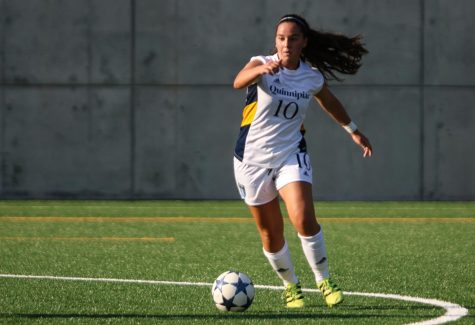 The announcement prompted Salas to return Spain, her home country, where she decided remote learning was her best option. However, Salas still has fond memories of what the atmosphere around her team was like.

“I thought the team was doing really, really well after the season was over,” Salas said. “The seniors left, and we built a really good team for next season. We were ready to prove how much we improved after spring break.”

An essential part of athletics is routine and structure. Whether it’s wearing different socks, a special wristband or pointing to the sky, these types of superstitions help athletes get into “game-ready” mode. The Bobcats started practicing last week, but Salas isn’t with them. So, one may ask themselves, how do you prepare the same way without being able to play games? Salas learned there are still tricky waters to navigate.

“Some days I couldn’t find the motivation to keep going,” Salas said. “I would still try to do everything the coaches wanted me to do, but in Spain, I was in lockdown for two months. I wouldn’t leave my house at all, so for two months I’d do all the workouts by myself without any material, and it was really challenging.”

In an attempt to remedy those difficulties, Salas got creative and signed up for the club team she used to play for in high school. Salas described how going to the field and getting that sense of nostalgia gets her to that game-day place. She also loves watching soccer on TV, so she can study the minute things professional players do. As we know, part of a professional athlete’s job is to travel to different places to play. While Salas played her high school soccer in Florida, she decided to go even further up the American East Coast to continue her athletic career in Connecticut.

Salas is one example of many Quinnipiac student-athletes who decided to pursue a higher level of education in a country they didn’t grow up in. The 2020 Bobcats roster has eight international players, seven of them from Ontario, Canada. Salas is the only one from Spain.

Ironically, her decision to come to Quinnipiac wasn’t based on soccer. Quinnipiac’s commitment to academics and winning gave her a balance of the two she couldn’t find anywhere else.

“I really want to focus on soccer and what’s best for me,” Salas said. “But at the same time, I really had to leave that behind and focus on academics. Do I want to wait and see if teams with more level will come to me, or do I want to go there and help this team become who they want to become?”

In women’s soccer head coach Dave Clarke’s eyes, getting Salas on his squad was a no-brainer. Beyond recognizing the on-field potential, Clarke was struck by her off-the-field demeanor.

“When we talked, we hit it off,” Clarke said. “We talked soccer, and she’s the type of player that you want to have in the program.”

Clarke followed this by explaining how Salas has that natural passion you can’t coach or teach.

“Selena is consumed with the game,” Clarke said. “She’s a Barcelona fan and grew up in Spain during a period when Barcelona was dominant and Spain was world and European Champions. Not saying we don’t have players who liked the game, but they’re not immersed in it the way a player like (first-year player Courtney Chochol) is and (sophomore midfielder Markela Bejleri) is the same.”

As a freshman in 2018, Salas acclimated to the college level quickly. She tied for third in team assists with three, tied for second in points with 11 and second in goals with four. It also helps from a personal standpoint that soccer runs in Salas’ family.

Salas shared that her brother and father dabbled in the sport, along with how she grew up with a soccer ball essentially always by her side. She started playing with her brother at 4 years old, and credits him for being willing to go to the field with her to play. Salas took a step up when she decided to play organized soccer at 5 years old.

Sports fans and sometimes parents often forget that under the jersey and cleats, a normal human walks the Earth. The world has seen athletes who lose their passion for what they’re doing or use quaratining as a chance to reignite their careers. In Salas’ case, she found cooking and studying nutrition as two hobbies she developed passion for.

“I became interested in nutrition, not only cooking, but how to use nutrition as a way to improve myself as an athlete,” Salas said. “I wasn’t cooking to get fat, maybe this is a good time to become my own nutritionist by applying the recipes I’ve been learning.”

This would traditionally be the part of the narrative where you describe the challenges the team has with their next opponent or simply when and where that next matchup takes place. What’s so unique in this scenario is that no fall sports team at Quinnipiac knows when exactly it will return to play. But, it doesn’t change the eagerness Salas has to step back onto the field, despite not knowing when that actually is.

“I’m going to take this as a personal challenge and see if we can bring this team to the top,” Salas said. “There’s been so many improvements, we made it to the quarterfinals two years ago, the semi finals last year, I still think there’s so much more we can give. It’s different when you’re the new player instead of being there, now I’m more confident on the field. Before I leave, I think we can get good accomplishments.”