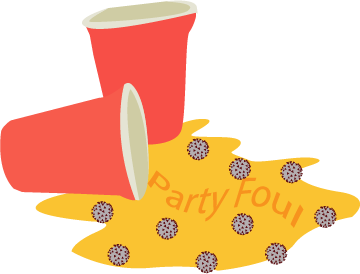 “I think that nobody should be partying on campus this year,” said Talya Castonguay, a sophomore film and media studies double major. “If people want to get together, they should be hanging out outside with masks on while socially distancing.”

The university policy this semester prohibits visitors from entering residence hall buildings. Only students who live in a particular building are allowed.

Students may hangout inside a residence hall with people from the same residence building. However, the group must not exceed twice the occupancy of the unit with the maximum of 10 people.

The rules for off-campus gatherings include having a maximum of 16 people outdoors or 10 people for indoors, depending on the space. Everyone is required to wear a mask and practice social distancing.

“Quinnipiac Public Safety is working in collaboration with the Hamden Police Department to monitor off-campus gatherings and will take action if these rules are violated,” according to an email from Monique Drucker, vice president and dean of students.

If the restrictions on gatherings are broken, the first offense results in being prohibited from attending on-ground classes and extracurricular activities for up to four weeks, depending on the Student Conduct Office’s decision.

The second offense results in suspension from the university for at least one semester without tuition and room and board reimbursements.

“These policies may appear harsh and unprecedented, but we are living in unprecedented times. We ask that you join in the campus and community-wide efforts to keep us all safe,” Drucker wrote in the email.

Samantha Hartmann, a sophomore marketing major, thinks the current university policy is reasonable since students will be sent home if they routinely break the rules.

“On campus, partying really shouldn’t be happening if we want to stay,” Hartmann said.

Julia Orlofski, a senior nursing major, created a petition that calls for the university to adopt a zero tolerance policy in regards to partying.

“(Students partying on campus) makes me furious,” Orlofski said. “I can’t comprehend how people could be so ignorant and selfish. It’s a blatant disregard for the rules, a blatant disrespect for all of the work staff and students alike have done to make this on-campus semester possible and an unquestionably inconsiderate action against fellow Bobcats.”

The petition Orlofski created asks that anyone who is found hosting or attending a large gathering without social distancing be removed from the university.

“The students of Quinnipiac will not stand for the actions of the inconsiderate few to ruin the chances of the rule-abiding majority to have a safe and healthy on campus semester,” Orlofski said in the petition.

Orlofski said that the best way to hold students accountable is to encourage them not to be bystanders. By speaking up about what students see, Orlofski feels people will not want to break the rules.

Castonguay feels that any students caught partying should be removed from university housing. She also feels that students should face some kind of academic repercussions too.

“If someone breaks the rules, the university should give no exceptions,” Castonguay said. “If students see their peers are being punished, they won’t be as willing to break the rules.”