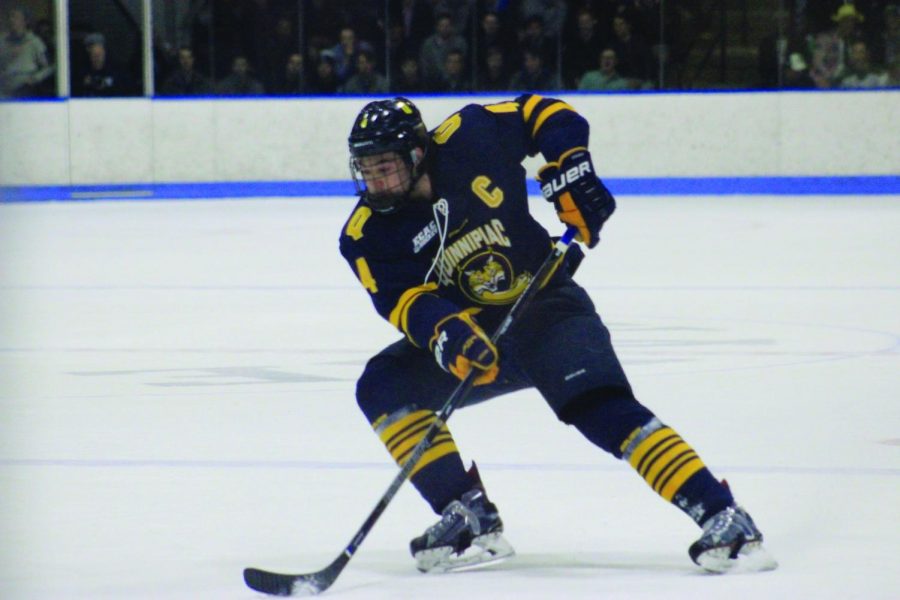 As the 2019-20 NHL Stanley Cup Playoffs roll on, it is fitting to look at two former Quinnipiac University hockey players that are currently making an impact in the league and its playoffs.

The first, and currently the most relevant player, is New York Islanders defenseman Devon Toews. In just his second season with the Islanders, Toews has played a considerable part in their stride to their first Eastern Conference Finals appearance in 27 years. He’s the second Bobcat to reach the NHL conference finals.

During his career with the Bobcats, Toews was an offensive force on the blue line, compiling a total of 67 points over 108 games. Toews then took his talent to the Bridgeport Sound Tigers, the Islanders’ AHL affiliate, after being drafted in 2014. Three seasons and 130 games later, the Islanders called him up in December 2018 to replace the injured defender Thomas Hickey.

The fourth-round selection accepted the promotion and delivered, producing 18 points in 48 games (four of which came on the power play) while averaging 17:54 time on ice (TOI). Once reaching the playoffs, he continued his impact.

Toews helped the Islanders eliminate one of their Metropolitan rivals, the Pittsburgh Penguins, in the first round of the 2019 playoffs. Toews experienced a slight increase in playing time, averaging just under two more shifts per game from his regular season totals. Additionally, Toews contributed two assists en route to a four-game sweep.

In Game 3 of the 2019 Eastern Conference Semifinals against the Carolina Hurricanes, Toews became the first Quinnipiac alumnus ever to net an NHL playoff goal. Toews received the puck just a few feet from the blue line, turned and ripped a snap shot past the blocker of goaltender Curtis McElhinney.

However, the Islanders were swept by the Hurricanes, ending Toews first playoff experience. Islanders fans’ expectations for the 25-year-old’s sophomore season were astronomically high, according to “Eyes on Isles,” an Islanders fan page.

Toews beat out Hickey for a top-four defensive spot during the 2019 training camp. Multiple Islanders beat writers and fan pages assumed that Toews would receive more 5-on-5 playing time and quarterback one of the two power-play units.

Although Toews received more power-play minutes, his offensive numbers took a bit of a dip compared to his rookie season. Part of the reason was power-play opportunities, or lack thereof, because the Islanders finished last in the NHL in total power plays.

He also started 2% less shifts in the offensive zone as compared to the previous season, according to Natural Stat Trick. That part can be attributed to Barry Trotz, Islanders head coach, and his extreme demand for team defense.

The Islanders finished 24th in the league in scoring. They were also the third-worst amongst teams that qualified for the 24-team qualifying round for the 2020 postseason in terms of scoring.

Looking at the two most frequently used advanced hockey analytics, Corsi For (CF%) and Fenwick For (FF%), Toews was one of the most impactful blue liners for the Islanders.

Corsi calculates all shot attempts: on goal, missed the net, hit the post and blocked shots at even strength. Any chance attempted for is a plus and any chance attempted against is a minus. Any number above 50% is positive and any number below 50% is negative.

Fenwick is the same measurement as Corsi, except it disregards any blocked shots for or against.

Although his offensive numbers did not reach expectations, Toews impressively stepped up for the Islanders on the defensive end, most notably when Adam Pelech was injured and missed 30 regular-season games.

Similar to the previous postseason, Toews picked up his game under the spotlight of the playoffs. Through two rounds of play, Toews produced a goal and seven assists in 16 playoff matchups, assisting the Islanders to the Eastern Conference Finals.

Averaging just over 20 minutes per game, Toews has been a substantial piece in the Islanders’ postseason success. Toews and the Islanders are four wins away from reaching the Stanley Cup Finals, a feat only one Bobcat alumnus has ever achieved.

As for the first player to make an appearance in the NHL conference finals, it’s Connor Clifton, a hard-hitting Boston Bruins blue liner. The former Bobcat has solidified a bottom-six spot provided he stays healthy.

After signing a two-year entry level contract in the offseason, Clifton was called up during November 2018, where he played a nine-game stint in the NHL. He was reassigned to Boston’s affiliate AHL team, the Providence Bruins.

Clifton had a solid 2017-18 AHL season, collecting 13 points in 54 games, but the Bruins decided he needed some fine-tuning before his return to the NHL.

The small sample size of professional play lit a fire under Clifton, who proceeded to double his point totals from 13 to 27 and was then brought back up to be a third-line pair defenseman on a cup-contending Bruins roster.

The Bruins then advanced to the Eastern Conference Finals in a matchup against the Carolina Hurricanes. During Game 2, Clifton came flying up the bench side, creating an odd-man rush. He passed the puck out front to forward Marcus Johansson and plotted himself on the weak side as he circled behind the net.

Johansson’s cross-crease pass didn’t make it through, but Clifton corralled the puck and fired it into the open net, notching his first career NHL playoff goal, merely 10 days after Toews netted his.

The Bruins then swept the Hurricanes and advanced to the Stanley Cup Finals, making Clifton the first Quinnipiac alumnus to reach the finals. However, the Bruins were defeated in seven games, meaning Quinnipiac will have to continue waiting for an alumnus to hoist hockey’s most coveted trophy.

During the offseason, Clifton signed a three-year extension deal.

As the 2019-20 season rolled around, expectations for Clifton were to continue the same level of production as a bottom-pair defender. Playing time for Clifton was limited as Boston’s staple defenders Zdeno Chara, Torey Krug, Charlie McAvoy and Brandon Carlo led the way.

Through 50 career regular-season games played, Clifton has not had many opportunities to grow at either end of the rink. However, his advanced statistics show he’s quite useful as a bottom-pair blue liner on a defensively loaded Bruins core.

When the 2020 NHL Playoffs eventually began, Boston rotated around the bottom-pair defenseman as players dealt with minor day-to-day injuries. Clifton saw some action late in the first round and four of the six matchups against the Tampa Bay Lightning in the second round.

Notwithstanding the limited games, Clifton collected three points in his six playoff appearances.

Even though it’s a smaller sample size through two seasons, Clifton’s analytics are very similar to Toews. Clifton has a 49.92% CF and a 48.43% FF. None of his GAR statistics are negative either.

His EVO stands neutral at 0. His most frequent linemate, Matt Grzelcyk, holds a -2.8 over the last two seasons. Clifton has a 2.1 EVD, a 0.4 TAKE, and a 0.6 Penalties Drawn Goals Above Average (DRAW).

Respectively, his GAR stands at 3.3, his WAR at 0.6, and his SPAR at 1.2. Even with limited exposure, Clifton proves to be a beneficial factor on the blue line for Boston.

Through their two short careers, both Toews and Clifton have proven that they will be solid players for several years.

A year removed from the university’s first alumni NHL playoff experience, Quinnipiac nearly witnessed the first-ever Quinnipiac alumnus matchup in the Stanley Cup playoffs. Had the Bruins defeated the Lightning, the Islanders and Bruins would have met in the conference finals.

Either way, Quinnipiac proudly looks at its former Bobcats with pride, awaiting the next wave of Quinnipiac alumni to rise up the prospect list.