Cut to the conversation 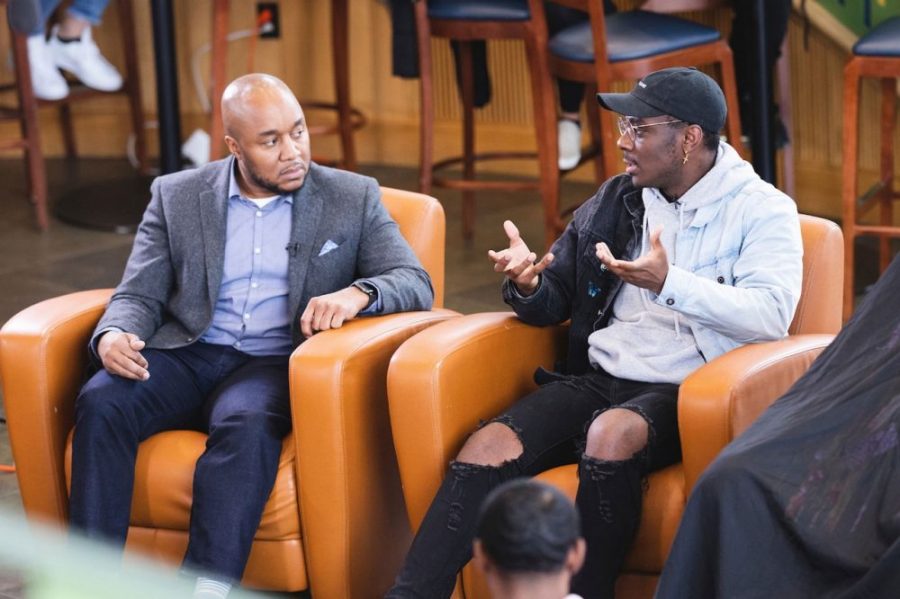 'The Cut' is filmed in the piazza, the center of student life.

It sounds like a barbershop, but it’s the Piazza in the Carl Hansen Student Center. Students sit around doing their homework, eating and socializing. But in the center of it all, right in front of the fireplace, sits a barbershop chair.

Here is the set for Quinnipiac University’s production of “The Cut,” a series featuring conversations between Black men on the Quinnipiac campus. The first season, which aired in August, included a wide range of topics. But like at the barbershop, no comment is cut from the discussion.

“A lot of times these are conversations that are being had in more closed-off spaces, and these are feelings our students don’t know how to express properly,” said Esau Greene, host of “The Cut” and a senior political science major.

Quinnipiac is a Predominantly White Institution, or PWI as according to College Factual, it is 75.9% white. Only 4.1% of the population is Black. Greene said that this show is helping to build a sense of community among the Black students on campus.

“Being a prospective student, if I am looking at other schools, I am trying to find something that gives me that sense of belonging,” Greene said. “It shows I could be a part of something or belong there. The issue at a lot of PWIs is that sense of community isn’t there, and that’s something we were hoping to do. I think we did a pretty decent job of it.”

Frank Scott, a sophomore film, television and media studies major, worked on “The Cut“ as a production assistant. He said that participating in the show behind the scenes was enlightening.

“Hearing firsthand how isolating being a person of color at Quinnipiac can be really helped me understand the importance of having spaces dedicated to minority communities on campus,” Scott said.

As a white student on campus, Scott said that he appreciates how the show features the experiences of Black students without making Quinnipiac try to seem more diverse than it is.

“This is especially great for Quinnipiac’s primarily white campus because it elevates Black voices without tokenizing them,” Scott said. “It acknowledges the issues that our school faces in the dialogue it facilitates, rather than pretending the problems aren’t there.”

So far, “The Cut” has featured several Black students at Quinnipiac as they talk about topics like mental health, coping mechanisms, Kanye West and memories of barbershop experiences. The idea for “The Cut” came from Don Sawyer, vice president for equity and inclusion at Quinnipiac.

At the age of 13, Sawyer used to cut his friends’ hair as a business. When he came to Connecticut, he met up with a friend who was holding barbershop debates about various topics, especially hip-hop. They eventually expanded topics and started recording them. He decided to bring something similar to Quinnipiac.

“I was planning to record it on my own but then I thought this might be something that the university would be interested in,” Sawyer said.

He pitched the idea to The Office of Integrated Marketing and Communications. Initially, the office was worried that such a segment would present a misleading image of Quinnipiac’s diversity.

“This is not a false image,” Sawyer said. “These are our students and the conversations they have on a regular basis. We are not selling anything that is not true.”

Sawyer said the decision to film in the Piazza was intentional.

“It’s about centering the voices,” Sawyer said. “It’s also about taking up space. The space is ours as well. Everyone can participate and listen.”

For now, the use of that location is on hold due to COVID-19. They hope to film “The Cut” in Burt Khan Court or another space to allow for social distancing or the installation of Plexiglas shields.

While the pandemic and the past several months away have created some difficulties for the show, it has also provided loads of content.

“You got the coronavirus, as a college student being at home, all of that,” Sawyer said. “The impact of the virus on different communities. The racial uprisings that have happened after George Floyd. What is this new focus on Black Lives Matter in sports? The election. There’s so many topics.”