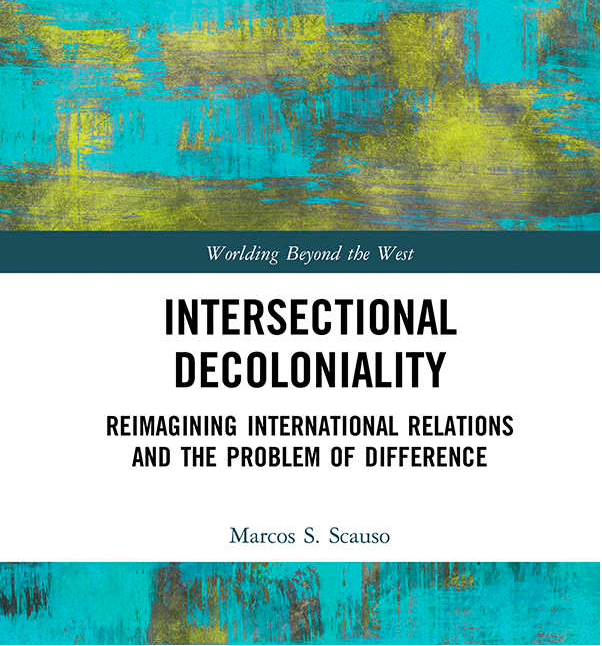 Scauso's book is based on years of research and two films.

A Quinnipiac University assistant professor of political science published a new book about intersectionality and how a policy or movement that benefits one person or group can actually harm another.

Professor Marcos Scauso, new to Quinnipiac last fall, has already been integrating the research and information found in “Intersectional Decoloniality: Re-imagining IR and the Problem of Difference” into his classes. However, getting the book ready for his students wasn’t a quick process.

“Writing a book to me is not a process that you start with a set hypothesis and then neatly narrate from there,” Scauso said. “This book, it’s a back and forth. It’s been rewritten close to a hundred times.”

“I explored numerous political approaches and social movements that influence the meaning of globalization,” Pagan said. “I had the opportunity to attend an in-class demonstration of refugee resettlement by representative Chris George, the executive director of the Integrated Refugee and Immigration Services (IRIS) and I had the chance to talk to a refugee from Africa. This experience helped me understand the complex process of refugee settlement to the United States.”

The book was inspired by Scauso’s four years of dissertation work as well as two films he made in Bolivia and Argentina, the country he is originally from.

In Argentina, Scauso made a documentary about class-based inequalities and poverty. However, when he went to Bolivia, his perspective on these issues changed.

“I clearly remember indigienous intellectuals in Bolivia saying, ‘Class-based politics don’t cover identity-related issues of discrimination. Our struggle is different and what you are telling us is your struggle is Euro-centric,’” Scauso said. “That was very shocking to me because in my activist mind I thought I knew what the real solution was for everything and everyone, and there were very important voices telling me I was wrong.”

After having the epiphany that he didn’t have all the answers to every group’s individual struggles, Scauso decided to expand his horizons. He started a second documentary, this one about immigration and indigeneity in Bolivia and Argentina. Again, he realized that the struggles he hoped to document in the film were not linear.

“I was confronted by other struggles, gender-based struggles by feminist movements and ecological, environmentalist struggles too,” Scauso said. “They didn’t quite fit with each other. No single struggle can explain every injustice or every solution. And that is the concern of the book.”

These themes are summed up in the first line of the introduction of the book.

“The encounter of ‘other’ ways of knowing, being, and enacting has historically created struggles that aim to know, organize, and control these differences,” Scauso wrote.

The concept of “othering” was eye-opening for junior political science major Ohidiani Imevdore.

“One of the main ideas of the book was the concept of ‘othering,’ which is loosely defined as the intrinsic difference in the treatment of a person or a group of people for various reasons,” Imevdore said. “Studying politics from this angle forced me to come to terms with how deeply embedded “othering” is in our political societies today as it is the eb and flow of most if not all of the ideas used to shape policy.”

In the United States, where Scauso now resides, he has been able to look at movements like Black Lives Matter and Me Too through the lens of this book.

“When we look at Black Lives Matter today, they take a much more intersectional approach,” Scauso said.

He said that it is typical of many countries, including the U.S., to deploy a policy that may benefit one group at the expense of another because they failed to do what Scauso did in Bolivia — hear the stories and struggles of other groups.

“For example, the idea of ‘America First,’ protect our jobs has become a way to discriminate against immigrants,” Scauso said. “Sometimes the reading of a problem or the reading of a solution can be used against other people who have also suffered injustices.”

Pagan said the most interesting part of the book for her was the discussion about liberal feminist ideologies.

“I realized the value of listening to marginalized communities of women and questioning my own privilege as a Hispanic woman living in the Western world,” Pagan said. “In his book, Professor Scauso gives voice to the prevailing consequences of colonialism and its impact on societies around the world.”