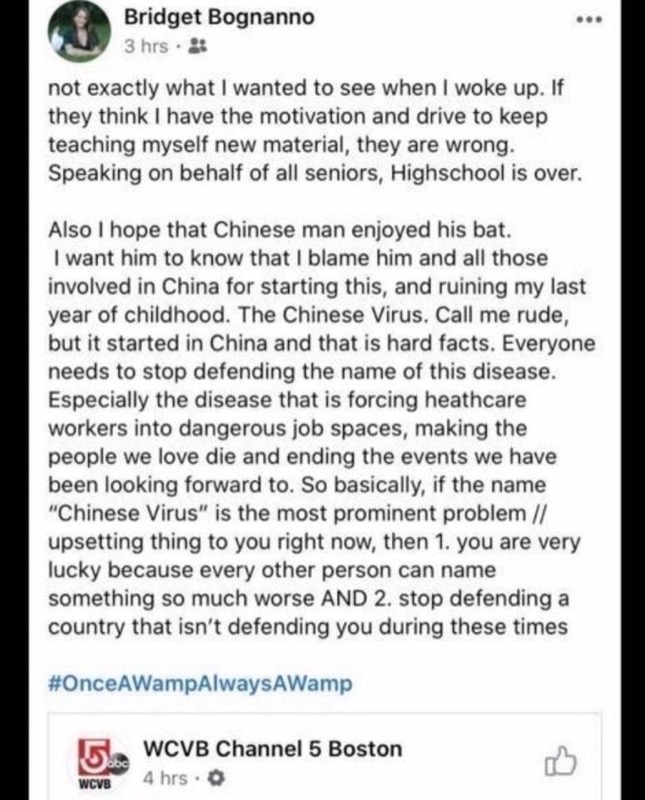 Recently, two incoming Quinnipiac students of the class of 2024 have engaged in racist actions on social media that do not support the inclusivity that the university strives to maintain.

On June 5, The Quinnipiac Chronicle was made aware that Bridget Bognanno posted on her Facebook account making derogatory remarks against China and the Chinese nationality. Within her post, she defended the pejorative term, “Chinese Virus.”

In addition to Bognanno’s post, another student of the incoming class of 2024, Maegan Quinlan, wore blackface, as seen in a Snapchat story.

In Quinnipiac University’s strategic plan, the“University of the Future,” spearheaded by President Judy Olian, a main goal is creating an inclusive and excellence-driven community.

In response to these instances, Olian and the executive board of Quinnipiac sent out a blanket email to the student body affirming the university’s stance on racism.

Bognanno and Quinlan’s actions, as well as the response of Quinnipiac administration, has sparked discussion within the university community.

Sokaina Asar started a petition with a goal for Quinnipiac administration to “show support to their claim for ‘Diversity and Inclusion.’” Asar transferred from Quinnipiac to the University of Connecticut, where she graduated in 2019 with a Bachelor’s degree in neuroscience.  .

Asar said she wanted to see more discrete action from Quinnipiac that addresses the racism being shown from members of the incoming class of 2024.

“(Quinnipiac) didn’t have any action behind the words,” Asar said.

Asar hopes that her petition can inspire others to take action within the Quinnipiac community.

Samantha Simon, another member of the Quinnipiac community, has also addressed the incoming students’ racist actions and Quinnipiac administration’s response to the situation.

Simon, a journalism major in the class of 2022, said she began an email thread to respond to the incidents and the administration.

Simon also felt that Bognanno and Quinlan’s actions were reprehensible.

“As human beings, you would think they would know that that’s just not right,” Simon said. “It is blatantly racist.”

On June 10, Quinlan released a statement to the university student media group Q30 regarding her engagement in blackface, claiming she was unaware of the inherent racism of her actions at the time. She also said she had no intent to cause harm but rather was “fooling around with makeup.”

Marcos Scauso, assistant professor of political science,  believes that education is important to combat racism, but that ignorance is  not an excuse for racism.

Scauso also addressed his opinions about Bognanno’s racist remarks about the COVID-19 virus..

“When we say things, when we make statements, we promote meanings,” Scauso said. “And those meanings are not just harmless opinions inside of our heads, not affecting anyone. When we say things, we construct people in certain ways, and when we do that, we often reinforce mechanisms of oppression and inequality that came way before we did; some of which are hundreds of years old.”