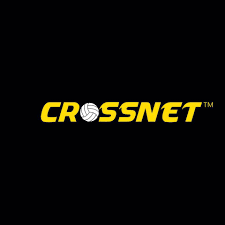 Crossnet is the first four-way volleyball game that is easily transportable and can be played both indoors and outdoors. The idea spawns from a combination of both four-square and volleyball put together.

Four people are needed to play and each person has their own individual square to stand in. A person is out of the game if the ball lands in their square, and whoever served the ball then gets one point. The game goes to 11 points and the winner must win by two.

“The person in the fourth square starts the game by serving it to the person in the second square. From there on out, it’s a complete free for all,” Meade said. “You’re trying to eliminate all of your friends by spiking at them.”

After receiving a film, television and media arts degree from Quinnipiac in 2014, Meade brainstormed the general idea of the game with his brother, Gregory Meade, and a childhood friend, Michael Delpapa.

“Once we came up with the idea for four-way volleyball, we did a quick Google search to see if it was already made. Nothing was on the internet,” Chris Meade said. “We couldn’t believe it, it felt too good to be true.”

Realizing the potential of the game, they went to their local Walmart to buy materials to create a prototype model. They put together two badminton nets and cut a hole through the middle of it to create the structure that they had designed.

“When we finished, we had our friends over and ended up playing for hours,” Chris Meade said. “It was really so much fun.”

Chris Meade and his partners began to look for sporting manufacturers overseas that would help create real models of the game to sell to the public. Eventually, they found a company who had strong communication skills and worked to keep them within their budget.

“Fortunately, (Delpapa) is an engineer and we had him as our co-founder to help us design the product,” Chris Meade said. “We got the first 15 modules from that and now we’re producing 22,000 at a time.”

Each Crossnet sells at a retail price of $149.99 and can be purchased on the website, as well as over 1,000 stores across the country. It is also available in over 20 major retail stores including Target, Dick’s Sporting Goods and Walmart. The company is expected to bring in $12 million in revenue this year.

“It’s not where you start, it’s where you finish,” Chris Meade said. “If you have the hustle, you could do whatever you set your mind out to do.”

Although Chris Meade didn’t go into the exact field he originally planned to go into, he is still able to use those skills and apply them to his business. The techniques he learned from his film classes help with various different aspects of advertisement with the company.

“Chris definitely has a creative mind,” Gregory Meade said. “When we do our photoshoots, he’ll help the videographer direct it.”

The COVID-19 pandemic helped increase sales for the company due to the popularity of people purchasing the game to play at home while stuck in quarantine. The company has also found that this time was a great opportunity to start working toward expanding their product line.

“Really cool things are on the horizon. We just released our pool model, which is called Crossnet H2O,” Chris Meade said.

Crossnet has been gaining extreme popularity with not only physical education classes in schools, but has also been featured on an episode of The Today Show. The segment focused on the top 13 outdoor toys and games for kids to get active with all summer long.

The company is currently working to expand their team by hiring more staff to help build the business. They are continuing to look for ways to broaden the outreach of the product.

“The biggest route that we’re trying to take for the future is to expand Crossnet into a league,” Gregory Meade said. “We want to turn this into a competitive sports game where there’s more aspects to it than just families playing it in their backyards.”