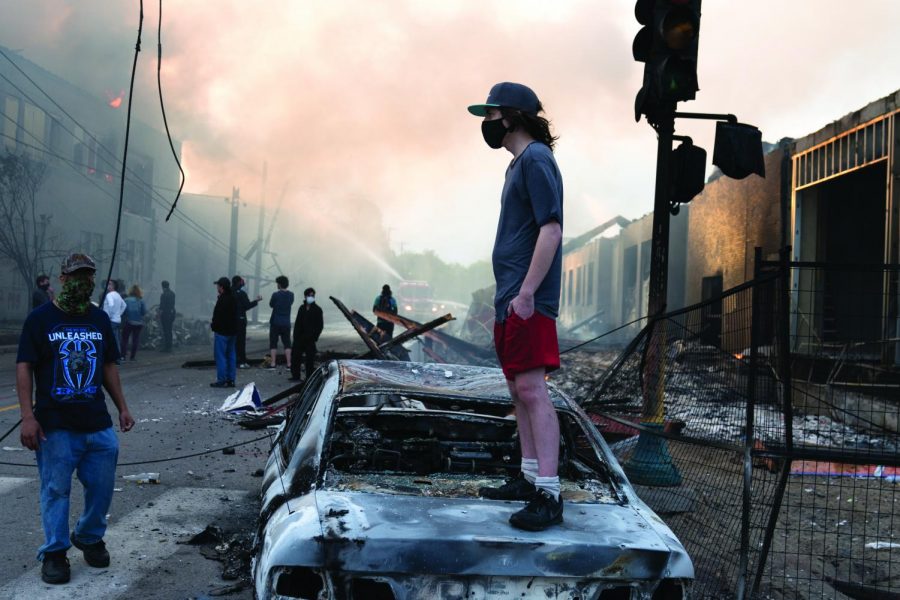 Justice. It’s what everyone, regardless of race, wants for George Floyd.

Protests and riots have swept the nation over the last week due to the murder of Floyd, a black man who lived in Minneapolis. The issue at hand, of course, is police brutality, and it’s something this country has struggled with for decades.

Floyd’s death marked a turning point in the Black Lives Matter movement. In the past, I have heard opposing sides when it came to cases. There are those who vouch for the police officer who commits the act, and those who vouch for the murdered black American. But things have changed so that we as Americans are completely unified on this. We know this is wrong. We saw it with our own eyes and recognized that this is happening in our own streets. We heard horror story after horror story, and we remained numb until this.

And so, we are united on that front. Nobody disagrees with the fact that every cop on the scene should be arrested at the bare minimum. Each of them knows protocol, and a knee on the neck is not that. Pinning a man to the ground as he says, “I can’t breathe,” is not protocol.

Everyone agrees that this was wrong. Everyone even agrees that things need to change. There needs to be a better system in place to police the police. A system where Derek Chauvin — a cop with 18 prior complaints that include three shootings, one being fatal — isn’t roaming the streets with a slap on the wrist. There needs to be a way to ensure immediate justice in the eyes of the law when it comes to the police. Chauvin was arrested with a second-degree murder charge, and the three other officers, J.A. Kueng, Thomas Lane and Tou Thoa, have been charged as well. It’s good to see, but it’s still disheartening that it took nine days of protests and riots to charge the three other officers.

This much is not in question. The divide began with the riots.

Whether you support the riots or are against them really isn’t the point. The point that everyone seems to be missing is that they are causing a divide between the political left and the political right when there shouldn’t be one. Americans are wholly united against these senseless acts for the first time in a long time. But due to the actions of thugs who are burning down buildings and looting businesses, we now have a divide.

I have tried continuously to convince people that the riots are disrupting the message rather than distributing it. I have tried to say that burning buildings doesn’t get justice for Floyd and all the others who have been killed. And while many agree with me, I have still seen many passionate messages that do not — people who believe that the police are more bad than good. People who believe that the rioting is a necessary evil.

I’ll share a personal story from my white, privileged life.

After speaking to my friends, who include members of the far-left, far-right and everything in between, I decided I wanted to attend a protest in my neighborhood. I told them first, and they told me I was crazy. “Naive” was the first word thrown at me. I was told that I would be a target given my skin color, largely due to the advertising of the event that labeled my town, Commack, New York, as “privileged.”

So, I told them what I believed, and what I have been told by many. I believed that the protest, like the vast majority, will have every intention of being peaceful. I wanted to prove the social media posts wrong and show people that everyone is for the cause, not just for the violence. I decided I wanted to go regardless of their concerns.

This is where people should start to take note.

I told my parents of my intentions. I told them I wanted to go to the protest, and I would keep my distance so that any COVID-19 concerns would be put to rest. I wanted to witness a historic event and be a part of something that needs to be more than a social justice movement and simply a part of life.

But my parents shot it down. The riots and dangers of the protests have corrupted their minds to the point where they viewed the risk of the riots over the importance of the cause. My mom pleaded with me not to go, simply due to the “risk” of the event. And while I’m under this roof, I have to obey that decision. I was told that it’s their hospital bill they would pay, it’s their insurance I’m operating under and that taking this “risk” isn’t worth what it could do to my family.

And, much to my dismay, I cannot even be that upset with my parents. There have been social media posts circulating around my town filled with racist threats of the murder of white people in surrounding towns. Messages and posts are everywhere calling people “white-devils.” My parents’ priority, like all parents, is the protection of their child, and they cannot sanction allowing me out with the reports that are being associated with the protests. The protests in Boston started off peacefully, pushing a message that needed to be pushed. But what was a beautiful display of compassion and caring turned into a violent mess due to a group of people who were only there to cause chaos.

This is what the widespread riots have done. They have taken the good intent of a social justice movement and struck fear into anyone who could help. I want to help, and I know so many who want to help beyond social media, but due to the threat of rioting, we are restricted.

The Black Lives Matter movement needs a firm definition, a universal one that can be clear among the chaos and fires. That definition should be about fighting for equality for black Americans, fighting police brutality and against a system that fails to prevent future injustice.

It’s about saving lives, not taking them. It’s about saving the essence this country was founded on. It’s about allowing everyone to pursue happiness without the worry that your father, mother, sister or brother won’t return from their nightly walk.

The meaning has become convoluted, and it pains me greatly because there is so much progress we could make if we weren’t divided as we always seem to be.

Stop the violence. Don’t let Floyd become just another name on the list. To those who are acting with violence, please stop diluting a cause that should be full-steam forward but instead faces the struggles of having an engine with only half its parts due to your actions.

United we stand, divided we fall.