The Quinnipiac Chronicle • May 31, 2020 • https://quchronicle.com/70407/news/how-the-irish-famine-has-significance-today-especially-during-a-pandemic/

How the Irish Famine has significance today, especially during a pandemic 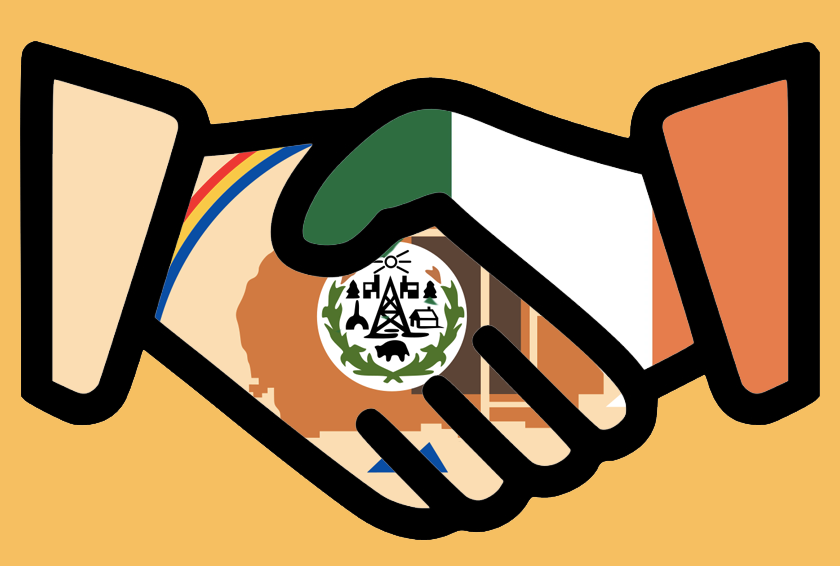 Professor Christine Kinealy, director of Quinnipiac University’s Great Hunger Institute, donated  funds for the Navajos and other Native American tribes, who are particularly vulnerable to COVID-19.

The history of this generosity relates back to Native American donations that were made to Ireland during the famine in 1847. Although Native Americans faced economic problems themselves, the Choctaw Nation, Cherokee Nation and other First Nation people heard of the suffering in Ireland and came together to give money to impoverished Irish people.

“As I did my research, I found the most moving donation stories were from the Native Americans, who themselves were poor, marginalized and had so little, yet they gave so much from the small resources they had and sent money to Ireland.” Kinealy said.

The purpose behind the Great Hunger Institute is to not only give people a deeper understanding of the causes and consequences of the Irish famine, but to also show the relevance it has to society’s issues today.

“We still have those problems.” Kinealy said. “We still have serious problems with hunger even down the road from us at Quinnipiac in New Haven, and we know the Navajo Nation is still suffering greatly.”

COVID-19 has had a large impact on Native Americans due to social and economic inequality imposed on them. Kinealy said people who face poverty are more susceptible to poor health and diseases, which is why there is a disparity between the illness rates of Native Americans and other groups of people in America.

“Even though the Irish famine occurred 170 years ago, there are some lessons from it that still apply to us today,” Kinealy said. “To me, those lessons are concepts of social justice and how we treat people who have less money and power than we have. It is our responsibility to help people in times of crisis.”

Professor Kinealy and The Great Hunger Institute are one of many to donate to the tribes during the worldwide pandemic. Dubliner Laryy Mullen Jr., the drummer for the Irish band U2, recently donated $100,000 out of pocket to Native American tribes.

A GoFundMe page is currently working toward raising a $5 million relief fund for Navajo and Hopi families. As of writing, the page has already collected a little over $4 million from thousands of donors, including Kinealy.

Although the pandemic forced the institute and university to close, all of the material completely shifted to an online format. Throughout the remainder of her online courses, Kinealy continued to educate her students on the positives that can come out of this situation.

“Our class was looking at a famous Irish poet, Seamus Heaney. Just before he died, he sent his wife a text that said ‘noli timere.’ That is latin for: do not fear,” Kinealy said. “I shared that with my students, and it became our class motto. I told them that we have to continue being strong, and it changed the whole nature of teaching.”

Jake Vogel, a recent Quinnipiac graduate with a degree in biology, had Kinealy during the spring 2020 semester.

“Working with Professor Kinealy was a pleasure. She always engaged with us during the semester, even with classes being moved to online,” Vogel said. “She respected all of her students and conducted herself in a kind and professional manner.”

Kinealy’s great pride for Irish history stems from her upbringing in Ireland. Her students said they recognize her passion and devotion toward Irish culture in her teaching.

“Her lectures were engaging and interesting, I had her for Conquering England as well as Frederick Douglass in Ireland the year before. Both classes were interesting and learning about Ireland and Irish culture was always fun and compelling,” said Mackenzie Fenn, who recently graduated with an English degree. “I remember her telling us about the exhibits in the library that she helped curate.”

Although she is stuck in quarantine, Kinealy is involved with a famine museum in Ireland that produces seven broadcasts on different aspects of famine relief. She is also starting an online series of six programs on the famous Irish writer, Oscar Wilde.

“We need to live up to the responsibility of understanding not just our own history, but other people’s history who have suffered,” Kinealy said. “I believe this would make us more sensitive and eventually help other people.”