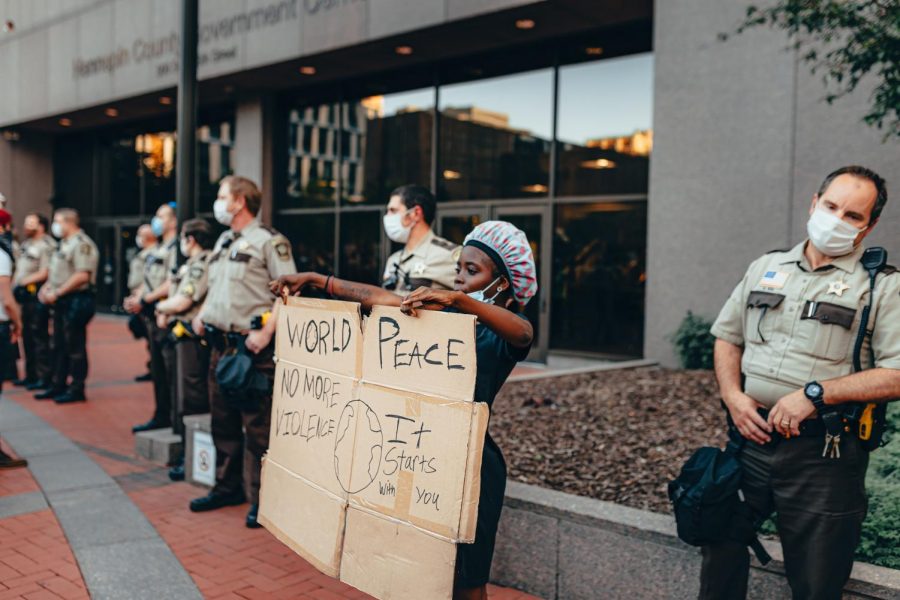 The issue is ignorance. The issue is racism. The issue is that an entire group of people have essentially been stripped of their ability to speak and advocate for change.

If you’re unfamiliar with what I’m referencing, I’m talking about the events that have unfolded in Minneapolis, Minnesota, over the past several days. After George Floyd’s murder, thousands have taken to the streets to protest. At first, protests were peaceful, but over time they grew more violent. The failure of law enforcement to hold a murderer and his accomplices accountable for their actions is unacceptable. Additionally, the riots are protesting the murder itself, and more importantly, the culture and mindset of America that allows these murders to take place.

The streets of Minneapolis are reminiscent of the 1990s Los Angeles riots held in response to the LAPD violently beating Rodney King. Buildings are burning, citizens are flooding the streets. There is anger, sadness and confusion in every face from every image that comes out of these riots.

What has bothered me about the response to these riots is the blatant ignorance of the message behind them. There was one correct response to these riots. People should understand the logic behind the sentiments that fueled the riots, hold those who are responsible for the murder — including the officers who stood and watched — accountable for their actions and move forward with a mindset that stresses the importance of protecting black Americans and preventing tragedies like this from happening again.

Instead, an alarmingly large group of people have responded to the riots with misplaced anger. People are upset that so many could flood the streets with seemingly no regard for the well-being of the businesses they tear down or the disruption they cause to so many of their neighbors’ lives. People are upset by the response when I truly believe they have no right to be, and I’ll explain why with an easy to follow analogy.

Imagine you are trying to cross the street. There is a red light, so cars are obligated to stop and allow you to cross. But instead, cars speed through the red light, with no regard for your most basic request. You wave at the cars and ask them to stop, but they don’t. You politely put up a sign that says ‘may I cross,’ and cars still don’t stop. You push the button that allows you to cross, but every time you do it responds with, ‘wait, wait, wait’ until you can’t keep waiting anymore.

Because while you wait, you see hundreds of your friends and family attempt to cross the street, trying to take advantage of the fact that the light is red and they have a right to cross. The drivers are aware that they should stop driving, but despite the laws telling them not to do so they choose to press on the gas. The promise that the car will stop isn’t extended to you, so you’re forced to watch as your family and friends are slaughtered by these drivers who were so eager to hit them that they disregarded the light.

After seeing so many people you care about killed, you decide enough is enough. You start throwing rocks at the cars, piercing tires with nails, placing obstacles on the road to prevent these cars from continuing to break the law and massacre your friends and family. You hope they get the message — things need to change, they need to start obeying the red light and granting people the ability to cross the street without fear of death.

But that’s not how they respond. They hear your message, but instead of addressing it, they get upset about the disruption you’re causing to their lives. They complain about damage to their car, failing to first address the fact that so many of the cars driving alongside them are hitting people as they drive through the crosswalk. They demand you remove the obstacles, pick up the nails and stop throwing rocks so you can have a civil discussion about how to move forward, how we can address the fact that so many are dying.

And so easily they forget that you’ve tried that! You politely waved to the cars, asking them to stop. You put up a sign asking for cars to grant you what they are born with. You pressed the button on the crosswalk post, time and time again, desperately hoping that just one of the times you pressed it that it would finally let you cross the street. But it didn’t, and now the drivers are upset that you’ve stopped trying even though they’ve rigged the machine to prevent you from crossing. They’re upset that after denying and denying and denying you what you not only wanted but deserve, that you decided to try something else.

So as the situation grows more and more frustrating, as drivers fail to actually hear your cries and pleas, the dealership owner decides to get involved. They say that they’re going to start driving tanks on your crosswalk. So now your road obstacles have become useless, and the owner — who is somebody that is supposed to be a role model and inspiration to the entire town — has taken away your voice.

The fact that you had to get down on your knees and beg, that you had to go to the lengths of throwing rocks at cars just so you could cross the street while the light was red was already so awful. But now, you’ve been denied even the ability to ask for your rights and your safety because people were concerned about the paint on their car. And despite the fact that they are the ones who have failed to act on an opportunity only they have, they’re now upset with you for snapping after hundreds of years of relentlessly pushing you to this point. They fail to recognize that all this time, they have been the only ones with the power to prevent this, because that’s how they set the system up.

This exhaustive analogy and all its plot points represent the refusal of black people’s humanity in the United States. The desire to cross the street is the desire to live without fear of your life being taken from you. The red light are laws that are supposed to protect every American citizen, regardless of race. The cars mowing down innocent, non-violent pedestrians are the Americans who kill their black peers while jogging or bird watching.

Waving to the cars, putting up signs and pressing the cross button are peaceful protests, the pleas from black Americans to be given the basic, humane treatment that their white peers receive with no hesitation. The button responding ‘wait, wait, wait’ is the failure of American citizens and politicians alike not just to act on these requests, but not even truly hearing them.

And so after all of the ignorance and unwillingness from white Americans to help their fellow human beings be treated as such, black citizens have been forced to resort to other options. Throwing stones, laying down obstacles — that’s what violent protests are. They’re a desperate attempt not just to make change, but simply to be heard. Martin Luther King Jr. once said, “A riot is the language of the unheard.” Black people haven’t been heard for hundreds of years, so now they’re demanding people to listen. And it’s not their fault that explosive protests are all they have left.

Dr. King said, “Riots are the language of the unheard.” Blacks are tired of not having their voices heard, sending hashtags, being patient, waiting 400 years for progress to be made. How much more time is needed? Racism hasn’t gotten worse, we’ve gotten better at documenting it. pic.twitter.com/Wzkn8rxT7K

So when you’re thinking about the riots taking place in Minneapolis, consider what they’re about. Consider what caused them, consider that the efforts of protests that you easily agree with have been tried for hundreds of years and realize that they don’t work. Understand that the voice of those who flood the streets has been silenced since the founding of this country and realize that there are no other options. That in order to stop the riots, you need to stop the cause of the riots and asking nicely for that change just isn’t working. It never has, and it likely never will.