From skates to cleats 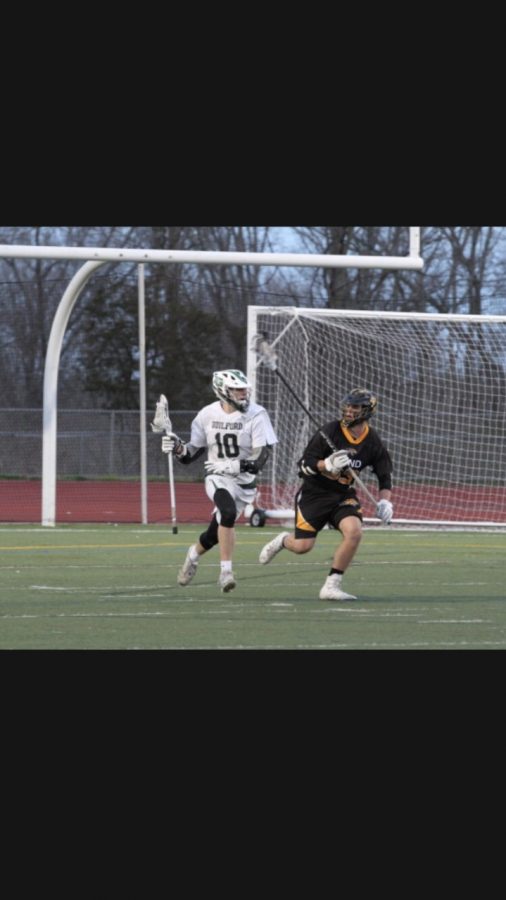 Crossover between sports isn’t something we see very often, especially at the highest levels.

For example, a rarity like Mookie Betts comes along only a couple times every generation. The Los Angeles Dodgers outfielder and former league-MVP is set to earn $27 million this upcoming season because of his transcendent talents on the diamond, but what truly makes him standout is his ability off the baseball field.

Betts is quite the accomplished bowler as well. As a member of the Professional Bowling Association, he racked up a perfect 300 at the World Series of Bowling in 2017. His ability to reach such great heights in both sports sets him apart from his peers, making him one of the rarest breeds of athletes we have today.

It just so happens that Quinnipiac managed to snag an athlete just as rare. Freshman attacker John DeLucia was recruited to Hamden to show off his brilliance on the lacrosse field, but he knows a thing or two about success on another playing surface just like Betts.

In his high school days, DeLucia was a star on the ice as well. Playing both hockey and lacrosse, he solidified himself as one of the greatest multi-sport athletes in his area. What may have helped him the most are the similarities between the two sports.

Hockey and lacrosse have closely related paces of play and hand-eye coordination requirements. Therefore, it isn’t unheard of for an athlete to play both, but DeLucia did more than just play. Similar to Betts, he excelled, performing at the highest level in each.

DeLucia’s name is printed all over the records books at his alma mater Guilford High School, both in lacrosse and hockey. He’s the record holder in points for boys’ ice hockey, and it isn’t even close. Before his skate touched the ice at Guilford High, the record was 145.

DeLucia nearly doubled that figure, ending his career with 270. He broke the record when his junior season was still young.

Guilford boy’s ice hockey coach Ralph Russo attested to DeLucia’s effort to finish with such a historic number pinned to his back, even right out of the gate.

“Athletically it’s amazing the kind of production he put up as an athlete from freshman through senior year,” Russo said. “Two weeks into the season I promoted him to our first line, and he put in 53 points his freshman year, which would be an outstanding season for anyone.”

Immediately drawing attention from scouts, DeLucia had a decision to make. He was excellent at both hockey and lacrosse, but he could only pursue one as a collegiate athlete. Russo firmly believed DeLucia could have been a Division I hockey player, but DeLucia fell in love with lacrosse.

“People would always ask me which one I liked more,” DeLucia said. “It was whichever one I was playing at the time, but lacrosse just turned out to be my favorite.”

Quinnipiac men’s lacrosse head coach Mason Poli was attracted to DeLucia for his involvement in more than one sport, but not only because of the commonalities between hockey and lacrosse.

“I also like the fact that you’re playing competitive sports,” Poli said. “It’s nice to work on your lacrosse skillset but to compete for a high school ((ice hockey) championship is only gonna help on the lacrosse field.”

Of course, Poli also saw a superstar athlete in DeLucia in terms of his talent. A player who earned All-American honors twice for achievements in lacrosse must have something special.

“His ability to stick handle, protect the stick playing as an attackman, the vision instead of staring down, he’s always got his head up and looking for other guys cutting,” Poli said.

Predictably, all of those skills are common between hockey and lacrosse. As DeLucia was an attacker for both sports, he was able to hone his skills at a much quicker rate.

Skating with your linemates while looking for an opening on the ice is not entirely different than looking for open green on the lacrosse field, and the connection between the two sports showed.

“The most coordinated (lacrosse players) were always hockey kids,” White said. “It has to do with repetition, he has that fast twitch muscle response that the hockey kids have, and his hands are so fast.”

The field vision came easily to DeLucia because it was essentially second nature by the end of his four years at high school. The ability to control possession in the offensive third while also maintaining a clear picture of the field around him is a talent that does not come naturally to most people, but with added exposure based on his dual-sport background, it’s what sets him apart.

DeLucia’s coaches also raved about his personality and commitment. White had nothing but good things to say about DeLucia’s ability to gel with his teammates.

“John was probably the most likable kid on the team,” White said. “No one ever really has any problems with John, he builds camaraderie wherever he goes.”

As the first junior captain of the Guilford boys’ ice hockey team, Russo also saw a leader in DeLucia.

“He really cared for his teammates, his team. That was always apparent in how he conducted himself,” Russo said. “He basically took the underclassmen under his wing as an upperclassman, he always had the ability to make those around him better and get the most out of those around him. I can’t state enough what a pleasure it was coaching him because he performed at a high level as an athlete and he performed at a high level as a person.”

Above all, DeLucia was committed to helping his team win.

When a professional athlete is having a season that isn’t up to his or her standards, it is later revealed that he or she was battling some kind of injury. In the 2008 AFC Championship game in which the San Diego Chargers played the New England Patriots, Chargers quarterback Phillip Rivers played on a torn ACL in his right knee. The Chargers went on to lose the game, and Rivers’ hobbling under center was a definite contributor to the loss.

But torn ligaments didn’t stop DeLucia from producing throughout an entire season.

He tore a ligament in his thumb, played through it for an entire season while barely being able to move it, and still locked down All-American honors.

As committed of a player you’ll find across the country, DeLucia came to Quinnipiac ready to set fire to the MAAC. And he did at the beginning of the year, racking up eight goals in five games.

Although his rookie season was interrupted by the novel coronavirus pandemic, DeLucia’s mental makeup will prepare him for what lies ahead, unfazed by the abrupt ending to the inaugural demonstration of his talent.

“Johnny was always very composed, that was probably his finest mental attribute,” White said. “He never really got rattled.”