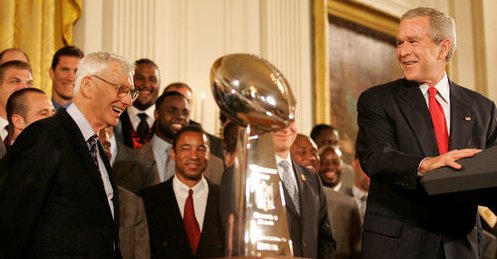 Dan Rooney, owner of the Pittsburgh Steelers of the National Football League, appears at the White House with President George W. Bush on the occasion of the commemoration of his side's winning Super Bowl XL.

The Rooney Rule might have been designed to prevent discrimination, but a new proposal by the NFL would say otherwise.

Established in 2003 in an attempt to encourage more minority coach hirings, the Rooney Rule dictates that every team must interview a minority candidate when attempting to hire a new head coach. It was expanded in 2009 to include general managers.

But it hasn’t worked. There are only four minority head coaches in the league and just two minority general managers. According to The Institute of Diversity and Ethics in Sports, about 70% of the league’s players are black, a high percentage when compared to the shockingly miniscule number of minority representatives seen in important positions like owners, general managers and head coaches. Unfortunately, the Rooney Rule has been circumvented in recent years through insincere interviews designed to satisfy the rule and move on.

So, in an effort to fight discrimination, the NFL has decided to propose a change to the Rooney Rule.

The problem is … it’s racist itself.

First of all, it’s important to acknowledge that the Rooney Rule is failing, and the NFL proposing this change symbolizes that. It’s encouraging to see the league taking note, but there are some major flaws with the suggested changes.

The proposed change has a few layers. The biggest change is the incentive-based system. Teams that hire minority head coaches or general managers, and retain them beyond a season, would move up draft spots in the third and fourth round of the NFL Draft. More specifically, six spots for hiring a minority head coach and 10 spots for a general manager. Compensatory picks, ranging from the third round to the fifth round, would also be offered for teams that lose their minority coach to another team.

Where do I start? This proposed rule encourages owners to hire people based on the color of their skin and not on their own merit. Moving up a potential 16 spots for hiring both a minority head coach and general manager is a significant jump, halfway through the round. That type of payoff is big enough for an owner to look past merit, especially if the team is rebuilding. Take a couple years to rebuild and earn better draft picks. The payoff through the league would be at the forefront of an owner’s mind, and whatever skillset the coach possesses would become secondary. It is a league-altering change that revolves around the aforementioned principle that declares that skin color is more important than merit. How could this possibly be a fair rule to encourage a just hiring process when the league is giving benefits to some and not to all?

“I think this is out of desperation, this is something that we’re throwing out there, but it is what it is,” Lynn said on CBS Sports Radio. “You can’t make people hire someone they don’t want to hire for whatever reason.”

Some may read the proposal and think that it’s fair because of how discriminatory the hiring process has appeared to be in recent years. But fighting discrimination with more discrimination is madness.

A big reason for this change was due to the belief that there are candidates that appear to the naked eye as future head coaches. Kansas City Chiefs offensive coordinator Eric Bieniemy is a black, offensive-minded coach who had a role in establishing the high-powered offense people have come to expect from the Chiefs. He has been interviewing for a head coach position for two years now with no success. His connection to Chiefs head coach Andy Reid, in addition to the on-field success of the reigning NFL champions, has a lot more credibility than new hires like New York Giants head coach Joe Judge or Carolina Panthers head coach Matt Rhule. For what it’s worth, I believe Bieniemy would have been a perfect fit in New York, helping to develop second-year quarterback Daniel Jones.

But we aren’t inside the interview room. We aren’t hearing the pitch each candidate is giving, we don’t know the exact direction the franchise wants to go in and we don’t know how well they interacted with the ownership and staff. Maybe Bieniemy had less to do with the offense than we know, which is possible in an offense with Reid at the helm. There’s no way this is applicable to every minority coach that applies, but it’s worth noting that hiring is a private process.

The core reason these candidates aren’t getting hired is obvious. It comes from the top. There are only two non-white owners, and these are often the people who are the most involved when hiring serious positions like head coaches and general managers. Owners, after all, have the final say on everything within the organization they own. However, it’s rare to see a franchise for sale, and so change has been slow to come as the same owners remain in power for decades.

This isn’t to say that nothing can be done, and some aspects of this proposal are smart changes. For instance, disallowing teams to block assistant coaches from interviews for higher positions seems like a great idea, especially when a large number of assistant coaches are minorities.

Another part of this proposal that should be implemented is extending the Rooney Rule to coordinator positions. This means that teams must interview at least one minority candidate for the job. It doesn’t hurt to be more inclusive in all aspects of the hiring process and given that many head coaches have coordinator experience, this is something that should have been put in place a long time ago. There are only two minority offensive coordinators in the entire league — Bieniemy and Tampa Bay Buccaneers coordinator Byron Leftwich. The proposal also includes expanding the Rooney Rule by requiring teams to interview two or more minority candidates instead of just one. Why not increase the number of candidates? There is no downside to offering more opportunities to more people. It may require a bit more work in evaluations, but that’s a very small price to pay for equality.

The NFL has made an effort to change its policies for the better, and that’s a promising step. But the league should make sure that the Rooney Rule doesn’t become more discriminatory — the very thing it’s trying to prevent.