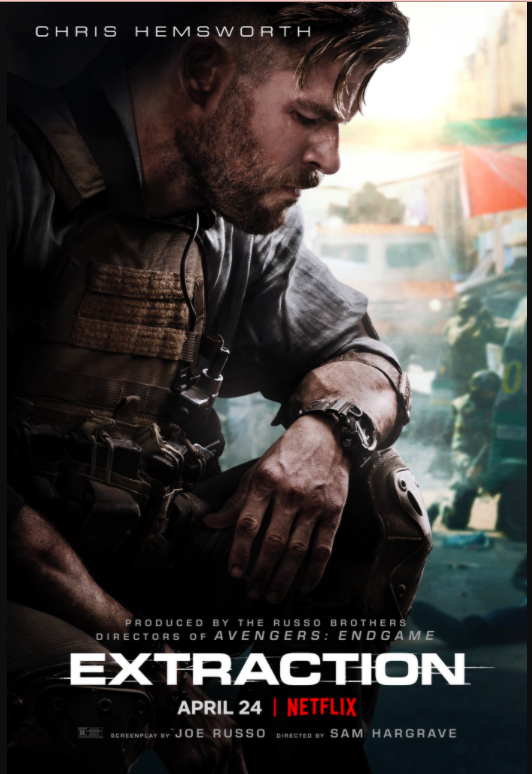 Chris Hemsworth may play a superhero, but no amount of lightning can save “Extraction” from the pitfalls of action movies.

“Extraction,” released on April 24, on Netflix, is about Tyler Rake, a mercenary who is sent to save Ovi, the son of India’s biggest drug dealer. The film was directed by Sam Hargrave and produced by the Russo brothers, who have previously worked together on “Captain America: Civil War” and “Avengers: Endgame.”

Like most main characters in modern action films, Rake, portrayed by Hemsworth, has a dark past that he does not talk about. His son died at a young age, leaving Rake reckless and borderline suicidal. The film lacks detail about how his child died and why Rake is racked with guilt because of it.

This character is not unique in any way and is very reminiscent of John Wick; however, Hemsworth is such a likable actor that it almost does not matter. Almost.

The only times when Rake gets any real characterization is when he is alone with Ovi, played by Rudhraksh Jaiswal. In these moments, Rake opens up, revealing what little detail the audience learns about the character. After this happens, the two grow close, and Rake disobeys his orders to continue to protect Ovi from the police in Bangladesh.

The plot of the film is relatively basic. Ovi is kidnapped by the rival drug lord in Bangladesh and held hostage for a ransom. Rake and a team of men are tasked with saving him, but the entire team except Rake is killed, leaving him to rescue Ovi by himself. This plot is so cut-and-paste, almost to the point of predictability.

However, the thing that stood out about this film was its fight choreography. The action sequences were easily the best parts of the movie, mainly due to Hargrave’s experience as a stuntman. It was also apparent that Hemsworth did most of his stunts, which made the fights more authentic. One thing to note, though, is that the film is extremely graphic in its violence.

The film opens with what appears to be Rake’s death. However, the ending of the film makes it unclear whether or not he is actually dead, as the final shot is Ovi in a pool with a man similar in appearance to Rake blurred in the background. While I like the ambiguous ending, I fear it is simply a tactic to leave “Extraction” open to having a sequel.

Overall, I think that the film is good for what it is —a basic action movie. There were some really well-shot scenes in the movie, but it does not compensate for an overall lack of characterization for the supporting characters in the film. However, it is definitely a good movie to watch when you are bored and need to feel some excitement.