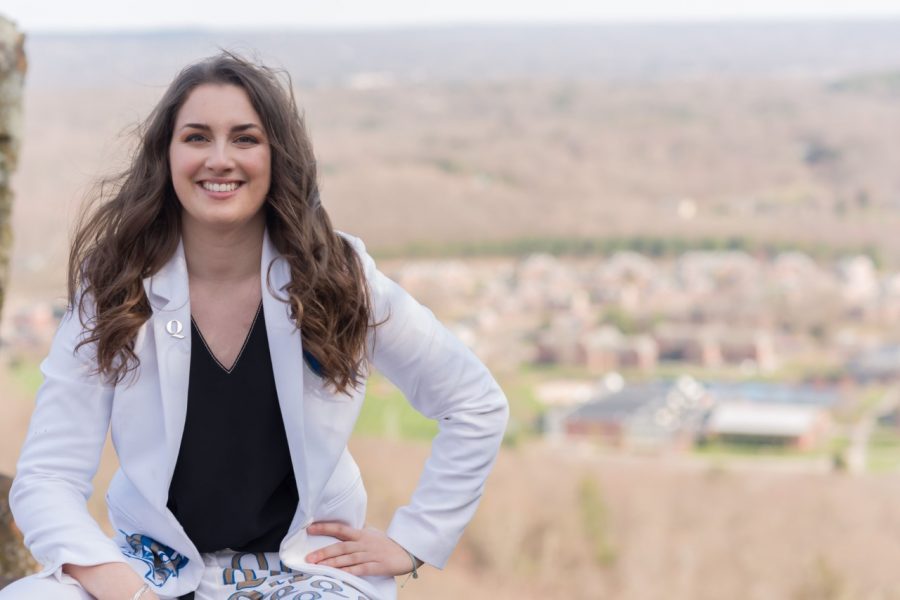 Marshall is running unopposed for the position of SGA president.

The presidential race for the Student Government Association (SGA), current vice president Sophia Marshall said that she is reaching out to the student body and making connections as part of her campaign. The junior in the Master’s physician assistant program believes that an issue-based campaign is beneficial.

“If you’re running against an opponent, you kind of have to focus more on marketing yourself to the student body,” Marshall said. “Now, I have the ability to just reach out to students more and be like, ‘what do you want?’”

The duties of the SGA president include being the student representative on the university’s board of trustees, the chair of the steering committee, meeting biweekly with the dean of students and managing the SGA organization to ensure that members are fulfilling their duties and are held accountable.

Among these, Marshall said she would value representing the student body in the board of trustees the most.

“So, that is a really, really cool sort of ability for the president to have. To be in that room where it happens and, you know, be able to advocate for the students in that respect,” Marshall said.

While Marshall said she is ready to take on those responsibilities, she also anticipates the opportunities to work toward initiatives that go beyond her explicit duties.

A major goal she has for the future is improving the relations between Quinnipiac students and Hamden residents. Marshall said she sees much room for improvement in regards to establishing strong relationships and conflict resolution between students residing off campus and their non-Quinnipiac neighbors.

Running unopposed has allowed for a focus on an issue-based campaign and emphasis on future initiatives, Marshall said. She discussed the steering committee, which consists of high leadership within the SGA, as a main proponent of agenda-setting and establishing change.

“The committee doesn’t necessarily have a set purpose. It sort of depends on the year, and it’s supposed to be in response to student concerns,” Marshall said. “Sort of like figuring out the tide of the campus.”

Marshall said the steering committee will be crucial to seeing her goals to fruition in the future.

“One of my biggest goals for this upcoming year is to really cultivate a culture of tradition (and) spirit on campus,” Marshall said.

Two key ideas Marshall discussed in regard to establishing tradition on campus are a “Bobcat Day,” an impromptu event where classes would be cancelled for the day and students could engage in fun activities on campus, and a tradition of seniors passing on “Bobcat Day” objects to underclassmen, which continue to be passed on through the years.

To further enrich the culture on campus, Marshall plans on increasing the involvement of first-year students on campus. Marshall said she has witnessed decreasing school spirit among incoming first-year classes and wishes for these students to become more involved in university affairs.

Additionally, Marshall plans to maintain and increase the efficacy and efficiency of SGA relations with university administration.

“If we have a good relationship with them, then that’s going to directly benefit all the Quinnipiac students as well,” Marshall said.

Another of Marshall’s goals is an ongoing concern — the dining experience. She aims to continually work with Chartwells to improve the QU Dining experience for students, as she said there is still room for improvement.

Marshall discussed her interpersonal skills as being valuable to achieving her goals. She said her existing relationships with university administration and willingness to speak up and be proactive when presented with issues is important.

“You have to be consistently talking, and you can’t be sugarcoating issues that students have,” Marshall said. “You need to be able to be comfortable to go in there and say, ‘look, this is something that students are really upset about. Let’s figure this out, because it’s not OK.’”

Marshall said this skill of “consistently talking” is her trademark.

“I have a reputation to be a really intense campaigner, which is good because I talked to a lot of students every year, but obviously, this year, it’s a little bit different,” Marshall said. “But, you know, I think that the way that I have campaigned in the past has really led me to develop a lot of really cool relationships with a lot of different people. And I think that that also is going to help me sort of not only listen to a bunch of students, but also bring a lot of different communities together.”