Spoiler alert: Don’t go out if you want to enjoy your favorite shows without getting spoiled 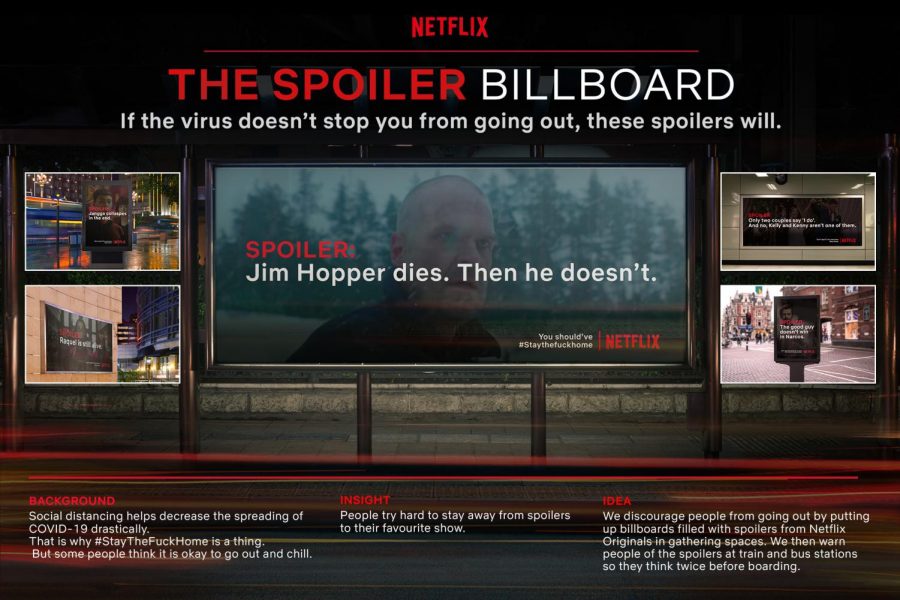 'The Spoiler Billboards' were created to encourage people to stay home during the COVID-19 outbreak.

Two students from Miami Ad School in Germany came up with an idea of spoiling Netflix shows outdoors to keep people home during the pandemic.

The billboards they made consisted of spoilers of “Stranger Things,” “Kingdom,” “Love is Blind,” “Narcos” and “Money Heist.” The idea was to put these up on billboards in gathering spaces.

The campaign started with them wanting to do something to raise awareness for people to keep themselves home since staying home, or social distancing, has been verified to be the best way to slow the spread of COVID-19. However, some people still thought it was not a big deal to go out. Kongruangkit said there was not enough communication out there to encourage people to do so, so she wanted to be a part of sending this message.

Their main targets of this campaign are the millennials. They came up with many alternative ways to communicate, though after considering all the challenges of the others, they came down to an advertising campaign.

“I think of movie spoilers,” Kongruangkit said. “That’s one thing millennials are trying to avoid the most.”

Before this campaign was posted on Ads of the World, an advertising website, by their school and went viral, they pitched the idea to Netflix. However, Netflix rejected it as the company has strict policies on spoiling its own shows.

Despite the rejection, it has been shared all over the internet. Their project was featured on many advertising-news and marketing-news websites, including Forbes.

“We are really excited especially when we first know it went viral, when Forbes was approaching us,” Kongruangkit said.

Also, they were happy to see their message sent out.

“Excited, of course,” Chaimoungkalo said. “Mainly because more people are actually receiving the message we wanted to communicate.”

Even though this campaign was made by students, many people on the internet misunderstood that it was an official campaign by Netflix. Chaimoungkalo clarified that this campaign had nothing to do with Netflix and they created it under the guidance of Miami Ad School.

“We had no intention of misguiding people,” Chaimoungkalo said. “But this is how advertising students develop their portfolios and get jobs in the real world.”

Right after the campaign went viral, Reason Why, a news agency based in Madrid, Spain, reported a similar campaign put out by a TV provider in Spain called Sky. It was put together by Darwin Social Noise, an advertising agency.

Sky planned to distribute spoilers of shows and films such as “E.T. the Extra-Terrestrial,” “Chernobyl” and “The Sixth Sense,” to discourage people from going outside, according to Reason Why. It warned people who thought about going out that the endings of TV shows and movies would be revealed.

Chaimoungkalo and Kongruangkit were aware of the similarity of the two campaigns. They said they had no idea if their campaign was copied after it went viral or not, but they believed they were the first to come up with the idea.

Chaimoungkalo posted a public statement on his personal Facebook page showing his frustration and understanding. He said he would be mad if the idea was copied in a normal circumstance, though he understood that this was a unique time when people were desperate. He explained that his initial purpose for the campaign was to help people and save lives — if it was copied for this reason, he had no problem with it.

“So guys, copy all you want. As long as the benefit of the people comes first before your own publicity. As long as we share the same objective, the same damn goal,” Chaimoungkalo said in his statement.

Chaimoungkalo also suggested that the idea would only work if it’s actually put up on billboards outside, not digitally.

Sky planned to release those spoilers on digital billboards in Madrid starting Friday, March 27, according to Reason Why. There were several people who posted pictures of those billboards that Sky put out on the streets in Madrid on their personal Twitter accounts.

While there are many other ways to send this message out, the students thought it was more powerful to communicate through brand-advertising as it can reach a broader audience compared to other methods. Kongruangkit explained that everything required creativity. As they considered themselves creative-field students, they wanted to use the power of their creativity to help society.

Both of them are also working on another campaign with a hospital to educate younger generations more on social distancing.

“Advertising is a major creative field,” Kongruangkit said. “In the end, it all requires creativity and advertising gives you freedom to do it.”