A concert held to ‘join forces and lift each other up’

Musical stars performed from home to lift up spirits, give thanks and raise funds for health care workers and first responders 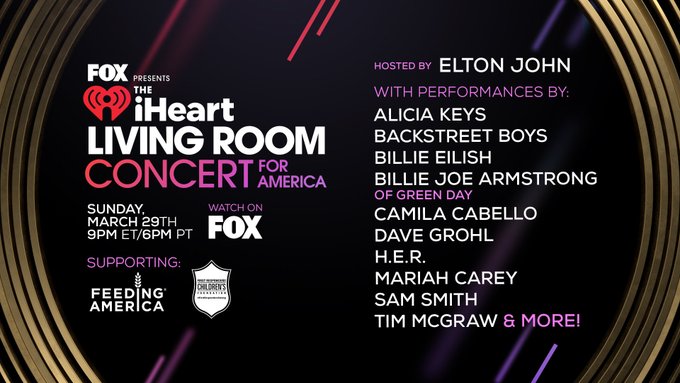 The iHeart 'Living Room Concert' was held on March 29 to raise money and awareness for health care workers and first responders who are at the frontlines combatting COVID-19.

“Here we are, all together, at home,” were some of Sir Elton John’s first words as he opened up the iHeart “Living Room Concert.”

The concert was aired on Fox and iHeartRadio on Sunday, March 29 and was organized to bring happiness to Americans stuck at home amidst the COVID-19 outbreak, while also raising funds for Feeding America and First Responders Children’s Foundation.

The idea of the “Living Room Concert” was sparked when the iHeartRadio Music Awards had to be postponed due to the coronavirus pandemic. The award show was originally scheduled for Sunday, March 29. Instead, John Sykes, the iHeartMedia president of entertainment, and Tom Poleman, the iHeartMedia chief programming officer, decided to take the time to be able to “aid people in this country who need help,” Sykes said to Fox News.

“It’s certainly unlike anything that we’ve ever done,” Poleman said to Fox News. “Normally, when we do our shows, we have state-of-the-art equipment, spare no expense to make it look great, you have all the glam squad coming in for the artists, but in this case, all you have is your cell phone and your living room and whatever instruments were there when the quarantine started.”

Sykes and Poleman reached out to many artists, asking them to partake in the concert. Originally, the two asked John to perform, however, he asked to host, since he didn’t have his piano with him.

Musical stars, such as Alicia Keys, Mariah Carey, Sam Smith, Billie Eilish and Finneas, Camila Cabello and Shawn Mendes, the Backstreet Boys and many more, sang from the comfort of their own living rooms to not only bring joy to those stuck at home, but to also thank the health care workers and first responders who are working on the front lines of the pandemic.

“Since we are all hunkered down together, until those days greet us again, we thought that we’d put on a little show for you,” John said while introducing the concert. “For the next hour, we will do what we can to lift your spirits, have some artist friends play a few songs, say hi and tell you we love you from our homes to yours.”

“Filmed from their personal cell phones, camera and audio equipment,” according to a news release from Fox, the musical artists sang some well-known hits. The Backstreet Boys, despite all being in different states, sent in footage of each of them singing their hit song, “I Want It That Way.” Eilish and her brother, Finneas, sang her Grammy award-winning single, “bad guy.” Cabello sang her song “My Oh My,” while Mendes played the guitar for her. Some singers, such as Keys, dedicated their performance to the first responders who are working each day to combat COVID-19.

Throughout the concert, artists popped in to give some words of inspiration, while also asking viewers to take a few minutes to donate to the two charities that the “Living Room Concert” was raising money for — Feeding America and First Responders Children’s Foundation.

“We’re going to, hopefully, raise some money and certainly awareness. Every single break we’ll talk about those charities and the artists will really help us promote donations to those important groups,” Sykes said to Fox News.

Feeding America is a non-profit organization that feeds over 46 million people by working with more than 200 food banks. First Responders Children’s Foundation provides support to the families of first responders, who are struggling financially during the COVID-19 outbreak.

Not only did the “Living Room Concert” help raise money for these charities, it also helped to promote the idea of staying safe and home amidst the outbreak. The artists promoted this idea themselves, showing that they, too, are social distancing.

“Let’s create an event that will give the people, who are kind of following protocol, staying at home, a little chance to breathe and relax, also to shine a light on the heroes out there,” Sykes said to Fox News. “The artist, they may be millionaires and live in beautiful homes or whatever, but when they’re called on, they’re the first ones to say yes.”

Amidst this scary time, artists and celebrities who did not perform, shared uplifting messages to the viewers, attempting to bring some light during this dark and unprecedented time.

“We cannot let the fear spread faster than the virus,” Lizzo said to John. “We have to let the love spread.”

However, the main goal of the “Living Room Concert” was to showcase the hard work of the first responders and health care workers on the front lines of the coronavirus pandemic.

“All those doctors, nurses and scientists on the front lines,” John said. “They’re living proof that most superheroes don’t wear capes.”