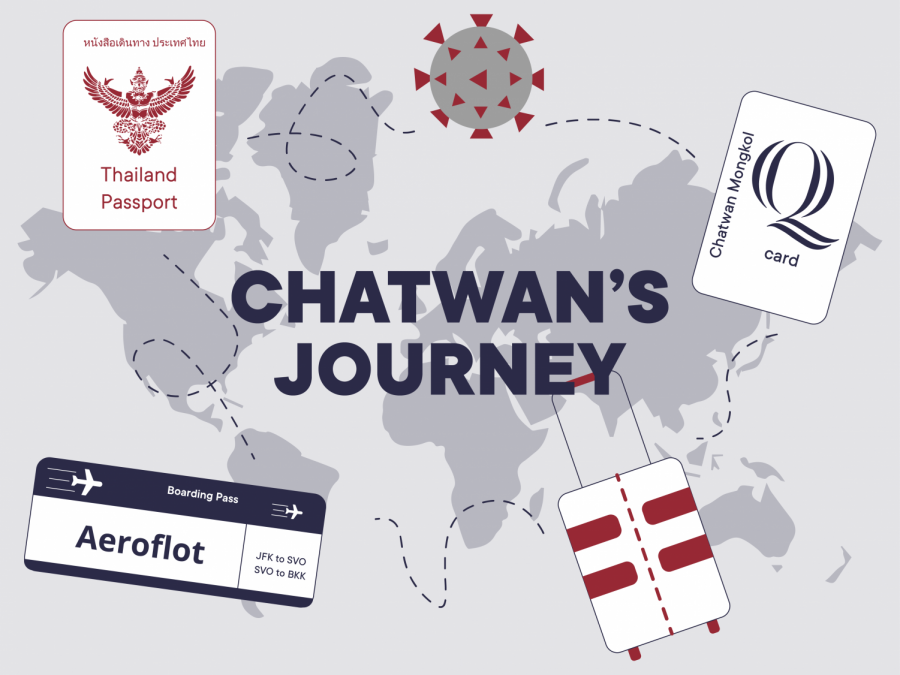 After a week of uncertainty and confusion, I can’t believe I’m at home right now, safely.

During the closure of the university, there were not a lot of options for international students–either to stay on the abandoned campus or to travel back home. I chose to return to my home country, Thailand, yet it wasn’t that easy.

Just like others, my friend and I were having a good time in Florida during spring break when I got an email from President Judy Olian explaining that spring break was extended and that the university was transitioning to online courses. Honestly, I kind of knew this was coming, but got really overwhelmed when it was actually happening.

I said to myself that it was fine, I would just go back to Quinnipiac, get some groceries and stay in with my friend. I did exactly that.

However, the situation got worse. People panicked. The number of confirmed cases increased daily. My friend’s family wanted her to go home, so I had to rethink about staying since she was my only on-campus friend then. Yes, I wanted to stay, but I didn’t want to be alone. If I stayed alone, I’d go crazy even before I got infected.

However, leaving the states meant having to move everything out, spending more money on traveling, wasting all the groceries I just got and losing a summer internship in Washington, D.C.

I was hesitant until my parents, who are doctors, advised me to come back home. They said the situation in the states was just the beginning, and it would get a lot worse. It seems like they were right. That’s why I decided to leave.

It was a Sunday when I made the decision. Then came figuring out the trip, booking an airport shuttle, moving everything out, renting a storage unit and contacting professors about the time zone conflicts that were going to arise.

My friend and I started to pack on Monday, March 16. She has ten thousand things, so it took us two days to get the packing done.

Despite our parents’ advice to leave as soon as Tuesday, March 17, we got the tickets for Saturday. We wanted to leave time to figure everything out, though that seemed to be a mistake. The situation both in the states and in Thailand changed daily. We never knew what to expect.

On Thursday, March 19, when we thought we had two more days to relax since we were done with everything and ready to leave, the Civil Aviation Authority of Thailand put out new travel restrictions for both Thai nationals and foreigners.

The new rules required us to have a fit-to-fly certificate and a letter from the embassy, otherwise we would be denied from boarding the plane. The rules came out on Thursday, and were effective on the day I flew, which meant I needed to find papers. I thought the rules were absurd. What if I can’t get those papers? Am I going to be denied to board? What if I had already arrived in Thailand and I couldn’t present those papers? Are they going to let me in? Are they going to send me back? But to where?

Technically, these rules were to deny entries of Thai nationals. I asked myself what kind of government does that to its own citizens.

All I wanted was to go home. I needed to contact the embassy, and of course, everyone who wanted to go back did too. I knew the embassy would be very busy, so I did what was required. I needed to go out and get a doctor certificate, which meant spending more money. It wasn’t a good time to go to any Urgent Care as they took serious precautions that stressed me out even more.

My last two days in Connecticut became a mess.

After I got all the papers, it was time to travel. It was time to get to the airport in New York. It was  time to sit in a plane with more than a hundred strangers from across the globe. Yes, it was the most likely time to get infected. I was scared, but what else could I do?

The week was exhausting, from moving out to getting the documents. Finally, I thought I just needed to sit on the plane until I arrived home.

No. That’s not all I went through yet.

My trip was from New York to Bangkok with a layover in Moscow. I almost missed my connecting flight. When the plane landed in Russia, like usual, everyone stood and picked up their stuff. The problem was they didn’t open the door for minutes until there was an announcement from the Russian health authorities that we were not allowed to leave the plane yet. We needed to fill out a health form and be checked by them first.

I looked at the time. I thought that I would miss my next flight for sure. I wondered what I was going to do if I missed it.

Fortunately, I had 10 minutes when I got out of that plane. The airport workers in Russia were helpful, after they noticed that my next flight was in 10 minutes, they cleared the security line for me and helped me get through it fast.

I ran from one terminal to another. It was supposed to be a 22-minute walk, according to the sign in the airport. I made it in eight minutes.

My flight from Moscow to Bangkok was empty. The plane could fit more than two hundred people, but only about 20 people were on board. There were Thais who were denied boarding because they didn’t have those papers I mentioned. I was sad and mad for them.

At least I got food very fast. I was able to sit wherever I wanted, I could lay down in the seats next to me and there was no line for the bathroom. My favorite part was when I asked a crew for a cup of Pepsi, they just handed me a whole bottle and said to take it because no one else was here and they had plenty.

At least my crazy week ended with that.

I arrived in Bangkok and went through the health and passport controls. I was asked to self-quarantine for 14 days since I flew in from New York. My mom picked me up at the airport and drove me home.

After a week of uncertainty and confusion, I can’t believe I’m at home right now, safely.