Unprepared and unqualified, the impeached President has taken his final tumble 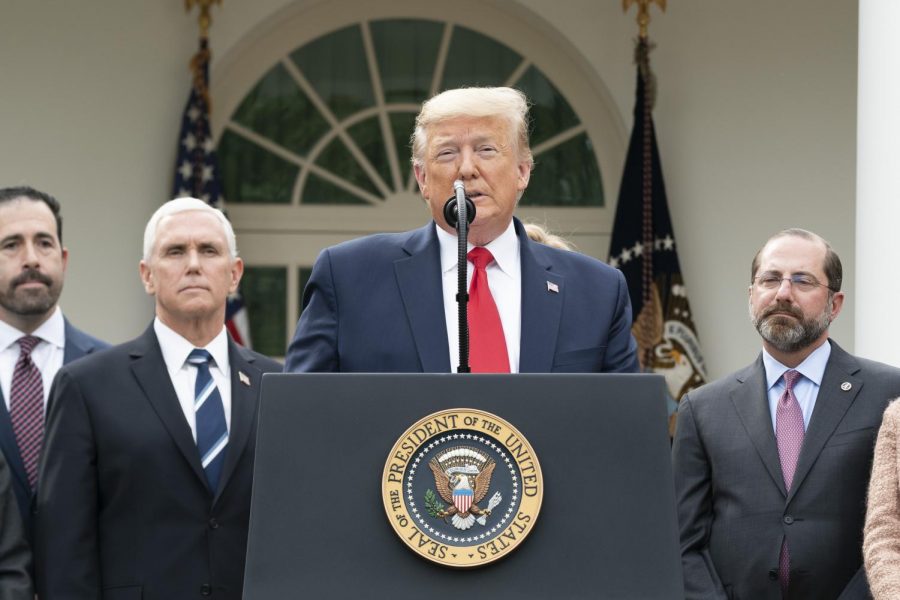 The moment Donald Trump  became the president of the United States, the clock began to tick. The potential for disaster was readily apparent.

What would happen in the four years that followed was anyone’s guess. Deflection of blame, stoking class and racial division, sure — these were at least expected. However, many fears lingered. What would happen when the United States faced a legitimate crisis? How would the country react to an international situation, when it was being led by a man who has lied his entire life to get by?

The moment is here in the form of COVID-19, a new coronavirus strain, and unsurprisingly, Trump’s response has been nothing short of a failure. In January, before the coronavirus was eventually declared a worldwide pandemic, the president was briefed on the virus’ potential to disrupt daily life in the United States.

Secretary of Health and Human Services Alex Azar initially faced resistance in getting his warning to Trump of the virus’ harmful potential. Rather than quickly assembling the necessary resources to prepare for the impending threat, Trump did what only he would deem permissible. He ignored Azar’s warning, believing that an increase in tests would lead to more positive cases. What was Trump’s real goal? It was to lower coronavirus cases in hopes of a better chance at reelection. His values are clear — personal interest and gain over the United States’ well-being.

At a rally on Feb. 28, Trump labeled the criticism of his coronavirus response a “new hoax,” perpetrated by Democrats in another attempt to damage his image. A mere four days ago, he claimed it would simply “go away,” even as cases increased nationwide. Tell that to the families of the 5,500+ worldwide who have died as a result of the virus. Now, the United States is in a national emergency, one that it could have been ready for.

On March 14, Trump again mentioned that the seasonal flu kills more people than COVID-19 in a given year. Has he forgotten that the coronavirus is 10 times deadlier than the flu? He boasted about the stock market’s performance, rather than consoling the families who have lost loved ones due to COVID-19. Behind him stood his loyal servants, who gazed upon the President with a lust that feels weirdly similar to North Korea’s “Dear Leader” mentality. Vice President Mike Pence deployed his regular line, “Thanks to the decisive action taken by our president.” Pence, who oversaw Indiana’s worst HIV outbreak in 2014, happens to be the leader of the U.S. Coronavirus Task Force. How encouraging.

In his remarks, Trump looked back at his loyal, cult-like servants and smiled — It was a familiar moment for the Trump presidency. Remember when he wanted to “drain the swamp?” He bragged that the administration had been working tirelessly, assuring audiences that “no one has worked harder.” Sorry, but no one is feeling remorseful for an administration that dragged its feet towards legitimate action, paired with an utter lack of preparation.

Have we forgotten that these people serve at the highest levels of the U.S. government? Their jobs are to serve and protect the public. Surely, Trump has somehow forgotten about the overrun and overworked hospital workers across the globe who have worked around the clock and done their part to save lives. Countries like Italy have been ravaged by the virus, which is urging countries behind it to take decisive, immediate action. There are continued warnings that the United States will soon mirror the grim situation in Italy. That’s if we don’t continue imposing strict limitations on daily life. There’s no way around it – normal life is temporarily on hold.

Despite the laundry list of missteps, we absolutely should not be surprised by this administration’s response to the pandemic. Was there ever any chance that an impulsive, mob-like figure like Trump would handle this crisis with competence? It’s somehow easy to forget that he became the third president in history to be impeached in December. He has used regular tricks from his playbook in the pushback from media and citizens to his COVID-19 response. It’s either Barack Obama’s fault, or that the media has been unfair to him. He somehow — yet unsurprisingly — had the audacity to say Democrats weren’t “giving enough” in coronavirus aid package discussions. Meanwhile, Senator Lamar Alexander (R-Tenn.) blocked a bill that would have required employers to provide paid employee sick leave.

Major news outlets have played a role in shaping Trump’s seemingly “normal” presidency. They have legitimized his thoughts, lies and very standing as a real leader, let alone a President. Instead of calling his statements lies outright, headlines regularly recycle a palette of free passes from “misleading statement” to “falsehood.”

When some blindly think along the lines of “America is the best” or “’Murica,” it’s hard not to scoff. How can we call the U.S. the world’s greatest nation when we fail to adequately respond to our citizens’ greatest needs? It is ignorant and dangerous to assume America’s standing as the “best” when it cannot provide every available resource to combat an outbreak. The Federal Reserve just pumped $1.5 trillion into the marketplace to prevent “unusual disruptions.” U.S. student debt currently sits just north of that number.

Years from now when history reflects on the past four years, it will highlight the Trump administration’s response to the moment. Though the past four years have been exhausting, we will have both digital preservation and history books to absorb the true length of Trump’s scandals and incompetence as Commander-in-Chief. We remember presidents for how they serve the country in times of desperation, spearheading inspiration and resilience. Conversely, we remember them for their missteps and crucial miscalculations, in addition to their lasting effects. As the president himself said at the Rose Garden on March 14, he doesn’t take any responsibility at all.