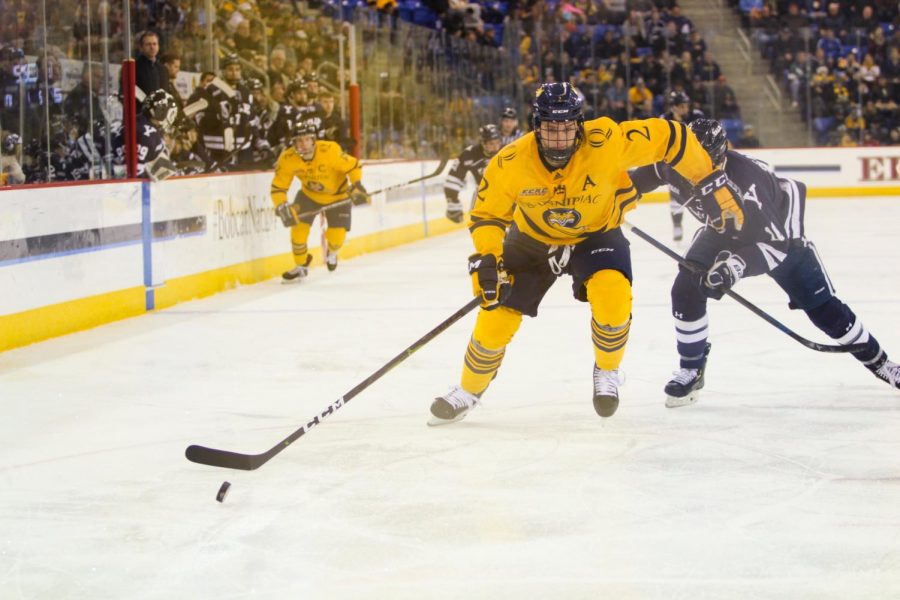 The Quinnipiac men's ice hockey season came to a sudden cancellation last week due to COVID-9.

It feels like an eternity ago, but it was just last week that the entire country began to slowly spiral into an unpredicted whirlwind.

For the Quinnipiac men’s ice hockey team, that meant the end of its run at the Whiteclaw Cup and a bid for the NCAA tournament.

It all began with the conclusion of the first round of the ECAC Hockey playoffs the weekend before. With No. 15 Princeton’s upset over No. 5 Dartmouth and No. 7 Yale’s double overtime win in Game 3 of its series against No. 10 Union, Quinnipiac was set to continue the Battle of Whitney Ave with Yale coming to Hamden for the quarterfinals.

However, what started with one team pulling out of the tournament ended with the complete end of college hockey.

Harvard men’s ice hockey team was the first to have its postseason run brought to a halt. The school administration took it upon itself to pull the team from the tournament, with the announcement coming on Wednesday, March 11. The Ivy League had just announced the cancellation of its basketball tournaments and all spring sports.

Harvard pulling its hockey team out of the #ECACHockey tournament

Princeton, Cornell and Yale undecided, up to each university to decide. If all Ivies pull, that leaves Clarkson, Quinnipiac, RPI and Colgate

But the conference tournament is in serious jeopardy

It was hours later that Yale followed suit and barred its team from competing. With only six teams remaining, the ECAC Hockey committee restructured the playoff format and Quinnipiac instead was faced with a matchup against Princeton.

The next day, Thursday, March 12, ECAC Hockey announced that it had cancelled its tournament.

#ECACHockey has cancelled the remainder of the 2020 men's tournament.

And just a couple hours later, the NCAA announced that it had cancelled the remainder of all winter sports seasons in addition to all spring sports for the 2020 season.

In just over 24 hours, the entire collegiate sports world was put in a state of shock.

For Quinnipiac, the abrupt ending meant the end of a chance to make a run for its second Whiteclaw Cup and redeem itself from last season’s shocking upset in the quarterfinals. It finished with an identical conference record to last season — 14-6-2 — and an overall record of 21-11-2.

Not only that, but the No. 15 team — Maine — would have qualified by 0.0001 over Quinnipiac for the final spot, according to College Hockey News. So, that 4-2 loss to Maine early in the season would have been even more frustrating.

With the news comes the likely end of three Bobcats’ collegiate careers — senior forwards Alex Whelan and Nick Jermain and senior defenseman Karlis Cukste. While the NCAA has announced its decision to grant spring athletes another year of eligibility, there has been no decision for winter athletes. But according to Jon Rothstein of CBS Sports, it appears unlikely.

In response to the season coming to an immediate close, Cukste and Whelan took to Instagram to express their feelings and thank the Quinnipiac community.

Beyond greatful for everyone who helped me make these 4 years the best 4 years of my life❤️ •••••• I was very fortunate to be around people who made this place truly a home for me. I always felt like a was a part of a family here and for that I will be forever greatful. To all my teammates, I will cherish every memory we ever made together. You guys made it one hell of a run and one I’ll never forget! Don’t take your time here for granted, push each other daily, always stay positive and make unbelievable memories💛 ••••••• Even though I’m sad my college career has come to an end, I am excited for what the future has in store! #foreverabobcat🐾

What a crazy week, just wanted to thank everyone at Quinnipiac for an awesome 4 years! Thank you to my family, friends, coaches, teammates, and fans for helping me live my dream of playing college hockey, it didn’t end the way anyone thought it would but I have memories that will be with me for life. I will always cherish my time at Quinnipiac and will be a bobcat for life 💙💛

For Cukste, Whelan and Jermain, they finished their Quinnipiac careers exceptionally in each of their own ways.

Cukste, a San Jose Sharks draft pick, decided to come back to Quinnipiac for his senior year instead of going pro like Brogan Rafferty and Andrew Shortridge. He finished his Quinnipiac career with 14 goals, 51 assists and 65 points, but it was his work in the defensive end that will be remembered most. Cukste racked up a total of 292 blocked shots in his career, leading the Bobcats in that category three out of the four years he was in Hamden.

Whelan was a sharpshooter, known for his speed and shot. In his four years, Whelan collected a total of 45 goals and 30 assists, good for 75 points. He led the Bobcats in goals in his sophomore year and was second on the team in that category this season.

Finally, Jermain, who was named the captain this season, was enjoying his best season by far at Quinnipiac. He had smashed his previous season highs for goals (five) and points (11) with 12 goals and 21 points. He molded perfectly into the role of captain, even with big shoes to fill after Chase Priskie graduated last year, who was captain for two years.

While there are plenty of disappointing things that happened, there were also a number of positives.

The Bobcats had a tremendous second half of the season, going 14-4-1 after the winter break. For the second year in a row, Quinnipiac not only defeated, but shut out a No. 1 team in the nation with its 5-0 victory against Cornell on January 31. It took part in the first ever Connecticut Ice tournament, making it to the finals before falling to Sacred Heart.

Junior forward Odeen Tufto continued his collegiate dominance, becoming the first Quinnipiac junior since Sam Anas in 2015-16 to reach 100 career points. He led the conference in assists with 31 and was third in the conference in points with 38. He was named to the All-ECAC Hockey Second Team at the conclusion of the season.

Sophomore forward Wyatt Bongiovanni built off of his impressive freshman campaign in his sophomore season. He led the Bobcats with 15 goals, finishing fourth in the conference in that category, and his 25 points were second on the team.

Junior Keith Petruzzelli was tasked with the starting goaltender role and ran away with it. Starting in every game, Petruzzelli finally found consistency at the collegiate level, with a 21-10-2 record, along with a 2.01 goals against average and .920 save percentage.

Sophomore defenseman Peter DiLiberatore continued to mature this season, becoming the quarterback of the first power play unit. He finished tied for the fourth on the team in points with 21 and was third on the team in assists with 15.

Along with these players, a number of underclassmen stepped up their play this season.

Sophomore defenseman Zach Metsa was one of the most consistent players night in and night out, flourishing with a larger role than he had in his freshman year and receiving praise from Quinnipiac head coach Rand Pecknold all season.

For the freshmen, forwards Ethan Leyh and Skylar Brind’Amour stood out the most. Leyh potted seven goals, tying Tufto and sophomore forward Ethan de Jong for fourth on the team. Brind’Amour brought a bigger body presence but showed off his finesse, capping off his freshman year with what would be the final Bobcat goal of the season — a spin-o-rama, SportsCenter Top 10 goal that even took home ECAC Hockey Goal of the Year.

Skyler Brind'Amour are you kidding me?! #SCTop10 #BobcatNation

In addition, some more good news broke out this week in regards to next season.

Not only is Quinnipiac bringing a top prospect in Ty Smilinac from the U.S. National Development Program, but Chip Malafronte of the New Haven Register reported on Twitter that the trio of DiLiberatore, Petruzzelli and Tufto all told Quinnipiac coaching personnel that they are returning to the program in the fall.

DiLiberatore received but declined an offer from the Vegas Golden Knights, who drafted him in 2018. Petruzzelli could have signed with the Detroit Red WIngs, who drafted him in 2017, but will come back for his senior year. And Tufto, who should be considered one of the top undrafted collegiate players, could have signed with a professional team. Instead, he too will return for a fourth year.

While each player has their own reason for coming back and not taking the professional route, it’s hard not to at least speculate that the cancellation of their playoffs was a factor in their decisions.

While the Bobcats were robbed of the chance to bring home any hardware, and the three seniors were cut from their last chance to do so, it was for all the right reasons that the playoffs were cancelled.

There was a lot of promise for this season’s Quinnipiac team, and it is unfortunate that it was brought to a sudden stop because of COVID-19. However, the team continued to take steps forward and with the players staying for next season and the freshmen class Pecknold and Co. are bringing in, the Bobcats have a legit shot at once again being a top team in the nation.

The Bobcats will be back better than ever next season. But for now, it is OK to reflect on what could have been for this season’s squad.