Three in the Key: Well … this isn’t good 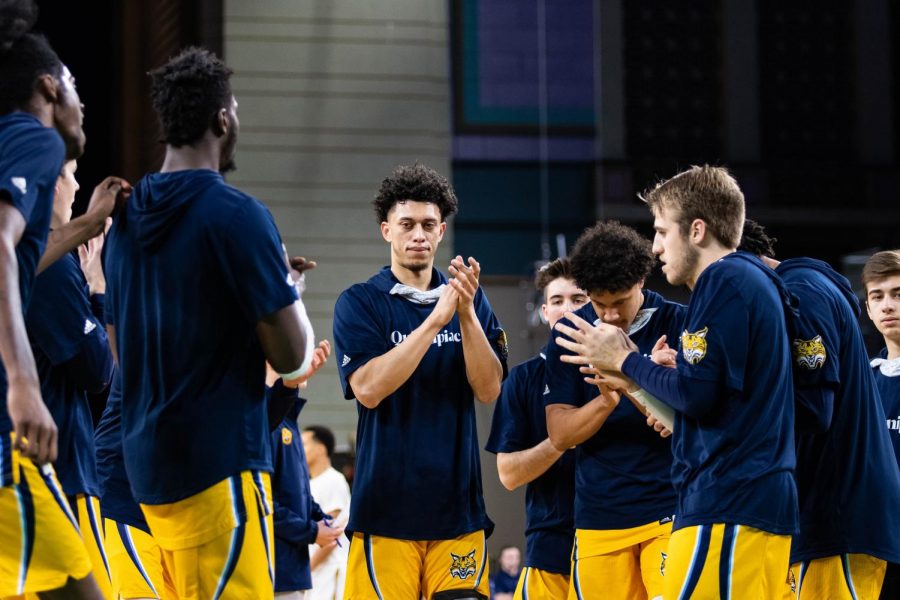 Between promising development from underclassmen and career seasons from upperclassmen, the Quinnipiac men’s basketball team was on the rise, earning national attention.

Then, the past few days happened, and Quinnipiac’s world was turned upside down.

The MAAC tournament was cancelled on Thursday, March 12, amid the ongoing COVID-19 pandemic, also known as the new strain of the coronavirus. The Bobcats didn’t get the chance to play a game — no shot at punching their ticket to the NCAA tournament.

But there’s always next year … right?

Quinnipiac was set to keep all of its players except graduate student forward Aaron Falzon, so winning the MAAC became a real possibility in the 2020-21 season.

Well, not necessarily — and with the latest transfer news, it doesn’t seem likely either.

Kevin Marfo announced his decision to transfer from Quinnipiac via Twitter on Saturday, March 14. The redshirt junior forward led the NCAA with 13.3 rebounds per game (RPG) this past season.

His rebounds per game average not only led the NCAA but also ranked 27th in NCAA history, just ahead of four-time NBA All-Star Paul Millsap’s 13.27 RPG in 2005-06 at Louisiana Tech.

Marfo also finished the season with 399 rebounds, good for 67th in NCAA history — two behind five-time NBA champion Tim Duncan’s 401 in 1994-95 at Wake Forest and fourth in MAAC history.

To put it bluntly, Marfo’s departure is going to hurt the Bobcats.

That’s not all, though.

After careful consideration, I have decided to enter the transfer portal and evaluate all my options for next year. I have not ruled out returning to Quinnipiac.

Davis played in just eight games and totaled 15 minutes in his three years with Quinnipiac — all of which came this past season.

Given the NCAA transfer rules, Davis would be required to redshirt the upcoming season. This would be his third dormant season as he redshirted his freshman season while recovering from an injury he suffered playing in high school and didn’t see the court in his redshirt freshman season.

Losing Kelly, on the other hand, would be a huge blow to Quinnipiac’s 2020-21 roster if he opts to transfer. It’s important to note that he hasn’t ruled out returning to Quinnipiac for his final year of eligibility.

That being said, it’s in Quinnipiac’s best interest to retain Kelly. He’s been the team’s starting point guard for three years, outside of the three games he came off the bench. This past season, he led the team with 16.7 (PPG) and 4.5 assists per game (APG), good for second and third in the MAAC, respectively.

If Kelly opts to transfer, he avoids having to redshirt his senior season since he’s preparing to graduate and become a graduate transfer like Marfo.

This makes the transfer possibility make sense, because if Kelly had to forego his senior season, he would more than likely not enter his name into the portal.

The Bobcats averaged 69.6 PPG and 36.5 RPG, so losing the team’s top two point-getters as well as the nation’s top rebounder will hurt. Additionally, Davis’ pending departure will leave the team’s bench thinner.

The worst-case scenario for the Bobcats is if all three players transfer. Sophomore Tyree Pickron and redshirt freshman Savion Lewis would likely share time at point guard and freshman Seth Pinkney would be set to be the team’s starting center.

Pickron, who returned from injury, played 14 games this year averaging 4.1 PPG, while Lewis, who finished the season on the bench due to injury, played just eight games averaging 6.5 PPG.
Pinkney avoided injuries and played in all 30 games, even starting one, but only averaged 3.0 PPG in 11.2 minutes per game.

Obviously, the best-case scenario would be that none of the three leave, however, that’s highly unlikely. Marfo has already received offers from Louisville, Florida, UConn, Texas Tech, San Diego State, Memphis and more, according to Corey Evans of rivals.com and Fox Sports’ Aaron Torres. Additionally, Davis’ future is unknown, but a transfer makes sense if he wants playing time.

So, the most realistic best-case scenario is if Kelly remains with the Bobcats, and there’s still a very good chance that happens. If he opts to finish his collegiate career in Hamden, Quinnipiac would keep the bench from becoming too barren, while also retaining one of the MAAC’s best players.

Regardless of Kelly’s decision, the Bobcats will suffer next season as it would take a miracle and then some to keep all three players. That said, it’s out of Quinnipiac’s hands, and all up to Kelly. His choice on whether to stay or leave will ultimately decide how painful and disastrous Quinnipiac’s offseason will be.