Nothin’ but Nylon: The final push 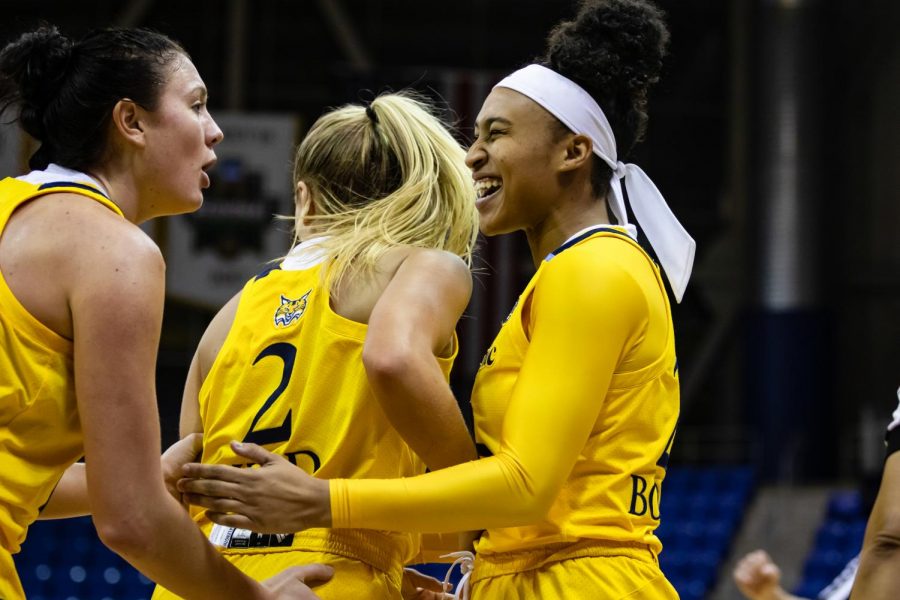 In order for Quinnipiac to find success as it did in recent years, it will have to consistently play good defense.

The Quinnipiac women’s basketball team changed significantly this year from its past six. Since its first appearance in the MAAC championship game in 2014, a 70-66 loss to Marist, it seemed like the team would be there every year.

And it has been.

A trophy followed in a revenge game against Marist the next season. Then, a blowout loss to Iona. Then a second ring. Then another. Then another. Three straight championships, a 4-2 record in the final game of the season over the past six years.

But this year, it’s been different. The team started its quest for a fourth straight MAAC championship on Nov. 5 against Drexel. A four-point loss to the out-of-conference foe was fairly reassuring for a team that entered the year shrouded in uncertainty for the first time in a long time.

Now the quest approaches its end, and much of that uncertainty has been addressed. Could this young team compete the way Quinnipiac has in the past? Yes … and no. Did the seniors bring enough experience and poise to help the Bobcats win their fourth straight championship? Yes … and no.

Again, the questions were addressed, not necessarily answered.

The Bobcats aren’t going to compete the way they have in the past. A consensus favorite for the past few years, this team is different. It enters the postseason as a five seed, but that doesn’t have anybody in the locker room worried.

“If you look at our non-conference opponents, and what we were able to do in our first third and our conference, what we’ve been able to do,” head coach Tricia Fabbri said. “The first time we saw Manhattan in our place Jan. 11, we were 4-8 (overall) and 1-2 (in the MAAC), and now we are tied for third with a 12-8 (conference) record, and doing what we’ve done the remainder … we’re ready to go.”

The women play their first game on Thursday, March 12, at 2:30 p.m. against that same Manhattan team. The first matchup of the season went well — the Bobcats made a statement that they were still competitive in the MAAC with a 70-58 win. The second game didn’t go as well, as the women returned home with a 77-62 loss under their belts.

The Bobcats need their key contributors to step up if they want to repeat the former result. In their first game against Manhattan, it was the big names who stepped up to earn the win. Senior guard Taylor Herd poured in 21 points, and junior guard Shaq Edwards contributed 15 of her own.

It was freshman forward Mikala Morris who may have made the biggest difference. She recorded 12 points and 17 rebounds, seven of which came on the offensive end. Luckily for the Bobcats, Morris returns to the court after mending a lower-body injury to face Manhattan in their tournament-opening game.

“She’s ready to go, she’s back, she’s ready to play,” Fabbri said. “She’s had a great week of practice. We’re excited that we’re as healthy as we’ve been all year going into the most important game of the season.”

Morris’ return is an immense help to the Bobcats. The efficient shooter — 44.3% on the year — adds another scorer and rebounder to a rotation that was stretched thin as the regular season came to a close.

She also helps on defense, which is a big part of Quinnipiac’s gameplan entering tomorrow’s game. Herd knows that Manhattan won’t go down easily, and Morris plays a big role with her teammates in stopping the fourth seed.

“(Manhattan has) very quick guards so we’re making sure that we’re getting whole help inside if they do get inside,” Herd said. “But our guards just (need to) keep everyone in front of us, I think that’s the biggest takeaway from watching film.”

The Bobcats will also need to play more spontaneous basketball to advance. As I touched on in the last entry of Nothin’ but Nylon, the offense seems to stall and feel robotic at times. Going into the tournament that problem shouldn’t linger, as the players have been focusing on eliminating the issue in practice.

“Just playing more free and more confident than we have throughout the regular season,” Herd said. “We don’t have that target on our back heading into this MAAC tournament, so I think it’s kind of a relief for our senior class because we have that room to play relaxed.”

“Every team wants to beat us still,” senior forward Paige Warfel said. “We are three time defending MAAC champion and that says a lot. Even though we finished as a five seed we’re still the team to beat.”

Herd echoed those sentiments, sharing Warfel and the rest of the team’s confidence.

“Our senior class is the only one to accomplish a MAAC championship.”

The senior Bobcats aren’t just hoping to graduate as the only MAAC players in the class of 2020 to win a championship, they’re confident they will. And the final push to cement themselves in history starts tomorrow against Manhattan.