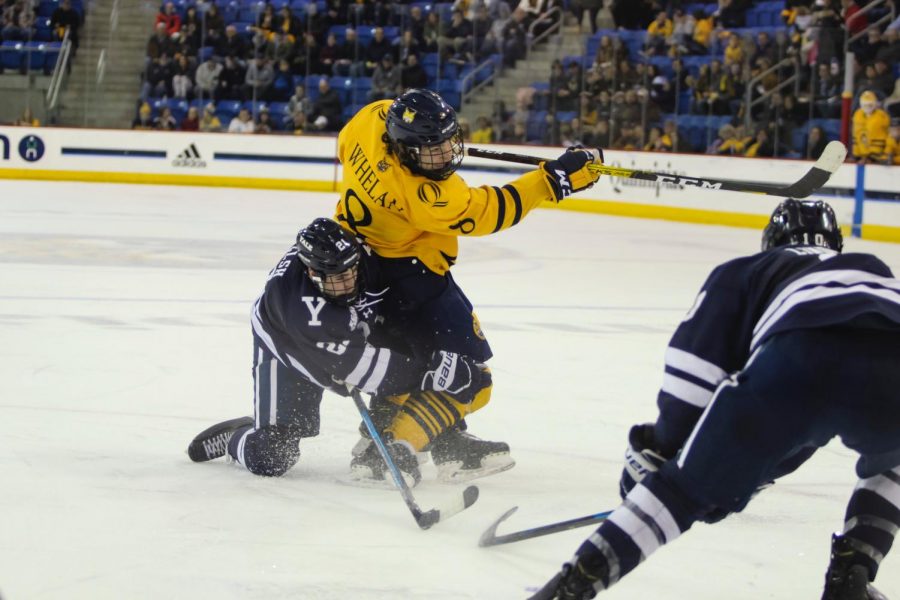 The ECAC Hockey playoffs are about to get underway, and even though the Quinnipiac men’s ice hockey team won’t be playing in the first round thanks to the bye, that doesn’t mean you shouldn’t pay attention to the four opening series. I break down my predictions for each series and then who Quinnipiac will most likely play in the quarterfinals.
No. 5 Harvard vs. No. 12 St. Lawrence
Harvard came out the gates in an absolute dominant fashion. The Crimson went 6-0 in their first six games, outscoring opponents 33-10 in that stretch. However, Harvard plummeted back to Earth and went 7-10-6 after its undefeated start — it’s a confusing and inconsistent Harvard team. Just a couple weeks ago, it defeated No. 2 Clarkson soundly 5-2, but then came out the next night and lost 6-3 to St. Lawrence, one of only two conferences wins all season by the Saints. Harvard has arguably the best young core in the conference. Its four top point scorers are all freshmen or sophomores, with freshman forward Nick Abruzzese leading ECAC Hockey in points with 39. Abruzzese should be the favorite for Rookie of the Year, following fellow Crimson sophomore forward Casey Dornbach, who collected the honors last season. St. Lawrence has struggled all year and even though it has defeated the Crimson once before, I don’t see it happening again and the Crimson should easily sweep this series.
No. 6 Dartmouth vs. No. 11 Princeton
Dartmouth is a classic middle of the pack team. It defeated the teams it had to, going 8-3-1 against the six teams below it in the standings, but it struggled against the top teams, compiling a 2-7-1 record against the five teams above it. Leading the way is sophomore forward Drew O’Connor, who is for sure not suffering from any sophomore slump. He leads the conference in goals (21) and is fifth in points (33). Dartmouth’s defense has been abysmal this year, allowing 3.16 goals per game. However, Princeton has been almost equally as bad with a 3.11 GAA. In addition, Princeton’s only two conference wins came against St. Lawrence, the one team below it in the standings. While this should be an easy sweep for the Big Green, Dartmouth almost was upset last year by last-ranked St. Lawrence, and it took going to overtime in Game 3 to get by the Saints. I don’t see the Big Green going through that again, and it should be a one-two knockout of Princeton.

No. 7 Yale vs. No. 10 Union
This is a series that could be the first upset of the playoffs. Both these teams rely on a couple of guys for offensive production and then after that, it just depends on who shows up that night. Yale is a team that relies heavily on sophomore forwards Curtis Hall and Justin Pearson, along with junior forward Tyler Welsh. After that, there’s a pretty big drop off, and the Bulldogs will look to their depth to keep them in games. Only six players have 10 or more points this season for Yale. It’s pretty identical for Union. Six players have double digits for points, with most of the production coming from senior Anthony Rinaldi. The biggest difference is that the Union offense is — well — not good. It averages 1.85 goals per game, which is third worse in the conference. I would give Union a chance against almost any other team, but the Dutchmen combined for a total of zero goals against the Bulldogs this season. That’s right. In the two games this season, Yale outscored Union 7-0. This Bulldogs’ defense seems to have Union figured out, and while I think it’ll take three games, Yale should come out on top.
No. 8 Colgate vs. No. 9 Brown
This should be the most competitive series and the one technical upset I see happening in the first round. Brown swept the regular season series between the two, but you can’t take anything for granted in the playoffs. Colgate is a confusing team. You look at its results in the regular season — lost and tied to both Harvard and Dartmouth, split the series with Quinnipiac and tied and lost to Clarkson. OK, you look at that and think Colgate can play with anyone. That’s right it can … but it also tied St. Lawrence and Princeton. Brown struggled against the teams above it, and took care of business against the teams below. I think Brown is the much more consistent team and you can kind of know what to expect night in and night out. Neither team is really flashy, with neither team having anyone that stands out offensively – no one in either team has over 20 points. The Raiders are just such a wild card that I can’t put any faith in them. I think Brown squeeks out the win in three games and advances.
What does this mean for Quinnipiac?
For the Bobcats, they can technically face any team other than No. 5 Harvard, No. 11 Princeton and No. 12 St. Lawrence. The most likely option will be No. 6 Dartmouth. As long as Dartmouth and Harvard both win, it won’t matter the rest of the results, Dartmouth will be the second-highest seed out of the bottom eight teams and will square up against the Bobcats.

However, it’s the playoffs and anything can happen. So, let’s explore the options.

If all the top seeds win, which is very likely and how it usually goes down, Quinnipiac will draw Dartmouth.

Confusing, huh. I know, it’s put my mind in a pretzel as well.

But as mentioned before, the most likely quarterfinal matchup for the Bobcats will be Dartmouth. As long as Harvard and Dartmouth win, it doesn’t matter the other two matchups. The Bobcats edged the Big Green in the regular season, tying the first game 2-2 and winning the second 5-1.

The opening round starts on Friday, March 5. We’ll see how it all plays out as the road to Lake Placid begins.