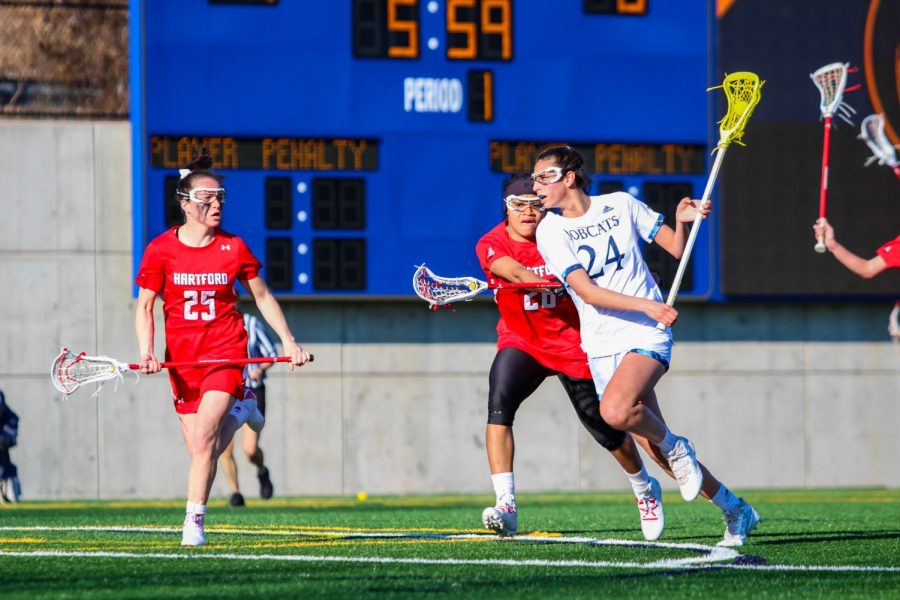 Quinnipiac jumped off to a hot start, scoring the first three goals of the game in less than six minutes and went up 4-0 midway through the half. Hartford broke its drought with a free-position goal by junior attack Megan Miller, her fourth of the season. The Bobcats closed the period strong, scoring three of the next four goals.

“We work so well together and when we work as a unit, we can always put things in the back of the net,” Szawlowski said. “We wouldn’t score those goals if we weren’t working as a unit.”

Quinnipiac freshman midfielder Emily Feeney closed the first half with a goal, her third of the year. The Bobcats were in control in the first half, outshooting Hartford 27-10.

After the Hawks went down by six goals, they cut the deficit to four by way of goals from sophomore midfielders Lily Belle Baker and Jessica Harrison. However, the Bobcats responded with a free-position shot by Szawlowski. Quinnipiac sophomore attack Brooke Sparacio also capitalized on a free-position goal about two minutes later.

Quinnipiac closed the game strong, scoring four of the game’s last six goals. The team had its best overall performance offensively with a season high 48 shots, 34 of which were on target.

The Bobcats dominated the turnover battle all afternoon. Hartford committed 29 turnovers, compared to Quinnipiac’s 14. The Bobcats forced 15 turnovers in the first period and maintained control with only three turnovers of their own.

After coming off of a 21-4 loss to UConn on Friday, Feb. 28, Quinnipiac head coach Tanya Kotowicz was happy that the team was able to get back to its style.

“We talked about moving the ball quickly and playing at a fast pace from the first whistle,” Kotowicz said. “I think we did exactly that and that helps.”

“She plays exactly how she plays at practice,” Kotowicz said. “She works really hard, and that consistency will always translate into games.

The Bobcats will look to continue their momentum on Saturday, March 7, at 12 p.m. against the Binghamton Bobcats at the Quinnipiac Soccer & Lacrosse Stadium.