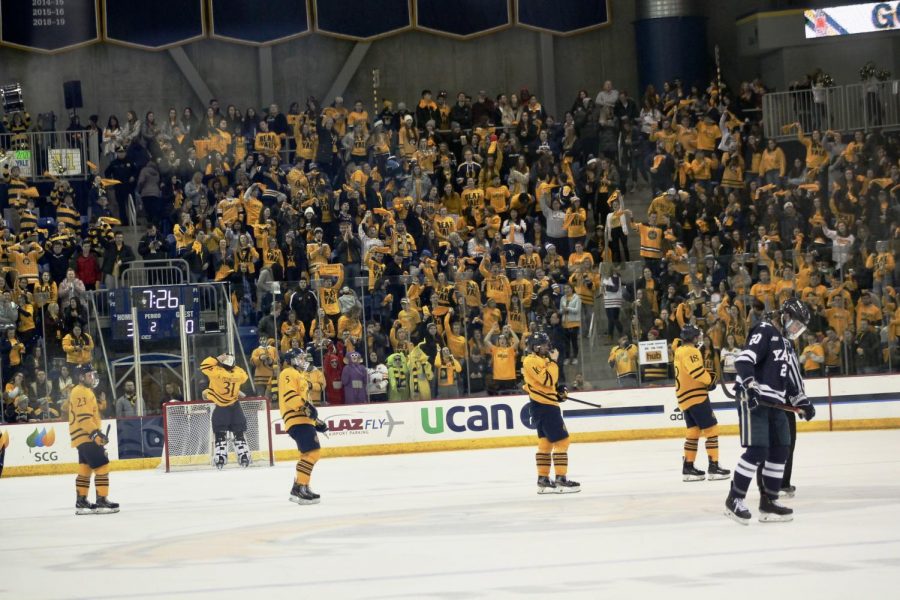 The last time the Yale men’s ice hockey team beat the Quinnipiac men’s ice hockey team was on Feb. 9, 2018, by a score of 3-2. The Bobcats have won five consecutive matchups since then, and did that change Saturday? Nope, make that six straight matchups, as Quinnipiac (21-11-2 overall, 14-6-2 ECAC Hockey) defeated Yale (13-14-2 overall, 10-10-2 ECAC Hockey) 5-0 to end its season with a major statement. Quinnipiac has now moved up from No. 17 to No. 14 in the Pairwise rankings after the Brown and Yale wins. Additionally, No. 16 Western Michigan lost to North Dakota, and No. 12 Northeastern was swept by unranked Vermont.

Now, the Bobcats have to shift gears toward the 2020 ECAC Hockey tournament. Here are my three takeaways from Saturday’s season finale that the Bobcats should focus on moving forward as the No. 3 seed in postseason play.
Bobcat balance
Captain and senior forward Nick Jermain, sophomore defenseman Zach Metsa, sophomore forward Wyatt Bongiovanni, freshman forward Skyler Brind’Amour and freshman forward Ethan Leyh each found the back of the net on Saturday. This 2019-20 roster has become one of the most balanced squads Quinnipiac has ever had. There are three Bobcats who end the regular season with double-digit goals, eight with double-digit assists and 11 with double-digit points. Time will tell if Quinnipiac continues to get contributions from all its starters, but at this rate, it should help the team in tournament play.
Keep calm
The Bobcats and the Bulldogs combined for 13 penalties in the season finale, with Quinnipiac committing six of them. Despite stopping Yale on all of its power-play opportunities, this is a telltale sign from the 2019 regular season finale. If you don’t remember, former Quinnipiac captain and current Florida Panthers prospect Chase Priskie was suspended two games for kicking a Yale player. Quinnipiac, however, still won the Cleary Cup and earned the No. 1 seed in the 2019 ECAC Hockey tournament. That said, Priskie’s absence hurt the team, as it was swept by the No. 8 seed Brown Bears in the quarterfinals. Quinnipiac has 273 total penalty minutes — ninth in ECAC Hockey — but has an 82.5% penalty kill — fifth in ECAC Hockey. Having your penalty kill out there often isn’t ideal, so Quinnipiac needs to make sure to keep its composure come tournament time.
People’s United power play
Quinnipiac had four power-play opportunities on Saturday but only converted one of them. However, Quinnipiac’s conference number for power plays aren’t so bad. They rank fourth in power-play goals (23), fourth in power-play opportunities (124) and sixth in power-play percentage (18.5%). This aspect of the game is important for tournament play, as teams such as No. 9 Clarkson lead ECAC Hockey in penalty kill percentage (90.2%). Quinnipiac will have to take advantage of its opportunities, if it wants to make an appearance in Lake Placid, NY.