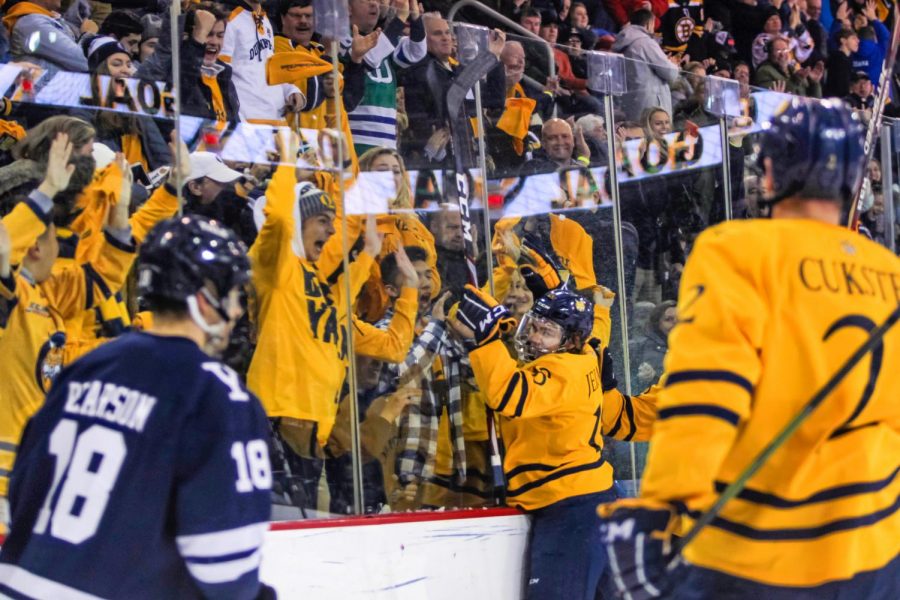 For the third straight season, the Quinnipiac Bobcats swept the Yale Bulldogs in the Battle of Whitney Ave season series to claim the Heroes Hat, and tonight they won in dominant fashion.

Unlike the first matchup this season at Ingalls Rink, which was decided by Quinnipiac sophomore Odeen Tufto’s overtime winner, round two was the seventh time Quinnipiac shutout Yale in 36 matchups.

Early in the game, with limited action provided, junior goaltender Keith Petruzelli provided a bit of a spark for the Bobcats by making two key saves to keep the game scoreless.

MIH: Petruzelli with a tremendous sprawling save. pic.twitter.com/lKRYmQZTM3

Quinnipiac senior defenseman Carlis Cukste created a brilliant scoring opportunity out of a simple offensive entrance and fired the puck toward the crease from the bottom of the circle near the boards, forcing Yale senior goaltender Corbin Kaczperski to direct a rebound into the low slot.

Captain and senior forward Nick Jermain promptly wristed the puck into the gaping net to give Quinnipiac a late first-period lead.

“In terms of the actual game, Yale was really good in the first and pounded us a little bit. We struggled, we didn’t have our legs. Keith made some big saves and weathered the storm a little bit,” Pecknold said. “It’s a combination of things, most of the time we get fired up and we play well, tonight I think the whole game was Keith in the first period.”

Quinnipiac began the second period on the power play with an opportunity to extend its lead. Sophomore forward Wyatt Bongiovanni profited off of excellent control and passing by the power-play unit and blasted home his 15th goal of the season.

Bongiovanni’s tally was just his second goal in eight contests, making it back to back nights with a goal, ending his cold streak.

“That power play to start the second helped us. In between periods, we were like, ‘we have to get one,’” Quinnipiac senior forward Alex Whelan said. “We didn’t have a great first, so if we got one early in the second, we’ll be able to jump (Yale) after that.”

Looking to get on the scoresheet, Quinnipiac freshman forward PJ Fletcher got fancy and sauced a brilliant tape-to-tape pass onto the stick of freshman forward Ethan Leyh, providing him a clear path to the net.

Leyh caught Kaczperski leaning and fired the puck into the bottom corner of the net to give Quinnipiac a 3-0 lead.

Before the teams headed back into the locker room, Yale junior forward Brett Jewell took a slashing penalty that carried over into the third period.

The third period provided the entertaining side of a rivalry game. Jewell delivered a vicious hit from behind on Quinnipiac freshman forward Skyler Brind-Amour. A scrum ensued following the hit, and both teams were assessed minor penalties each.

MIH: Jewell with a vicious hit from behind.

With a comeback still in reach, Pecknold challenged the call, looking for a five-minute major penalty. After further review, the officials concluded that the hit was indeed a match penalty and ejected Jewell from the game.

Sophomore defenseman Zach Metsa one-timed a puck that originally was saved but rattled around and crossed the goal line.

However, the highlight of the game came off the stick of Brind-Amour who carried the puck from the neutral zone into the attacking end and proceeded to pirouette around the defender and slid the puck five-hole for Quinnipiac’s final goal of the night.

“Just something that I always practice in the summer, working on one-on-one moves. That was one of them, and it kind of presented itself and I just did it and got a little lucky with the fact that it went in,” Brind-Amour said. “Especially at this level, that was probably my best one, the other ones have just kind of been tips.”

The roar of the crowd following the goal summed up how pristine the deke and execution had been. Whelan even suggested that the clip be the No. 1 highlight on SportsCenter Top 10.

MIH: Another power-play goal for Quinnipiac.

“We were standing on the bench, right when he got it coming down the wing, and someone was like ‘do something sick,’ and right as that happened, he just did a spin-o-rama and everyone was just holding each other back,” Whelan said.

As forementioned, once the final buzzer sounded and both teams lined up to shake hands, it was time to present the Heroes Hat.

“It’s the 18th year of the Heroes Hat, and it just means a lot to honor the victims of 9/11,” Pecknold said. “Our guys are focused and we want to win that hat, and we got it again this year so we are happy.”

After clinching a first-round bye in the ECAC Hockey playoffs, Quinnipiac’s next matchup is to be determined. This season finished much differently last season as two players were ejected and suspended during last year’s Yale game for the first playoff matchup which attributed to the series loss.

“We feel great. That was one of our stories today, we just have to stay out of it and make sure (Yale) doesn’t drag you into something that you wouldn’t normally do,” Whelan said. “That was important for us to make sure everyone is able to play in the playoffs, and it was nice to get that win, especially against Yale.”