Nothin’ but Nylon: Create and capitalize 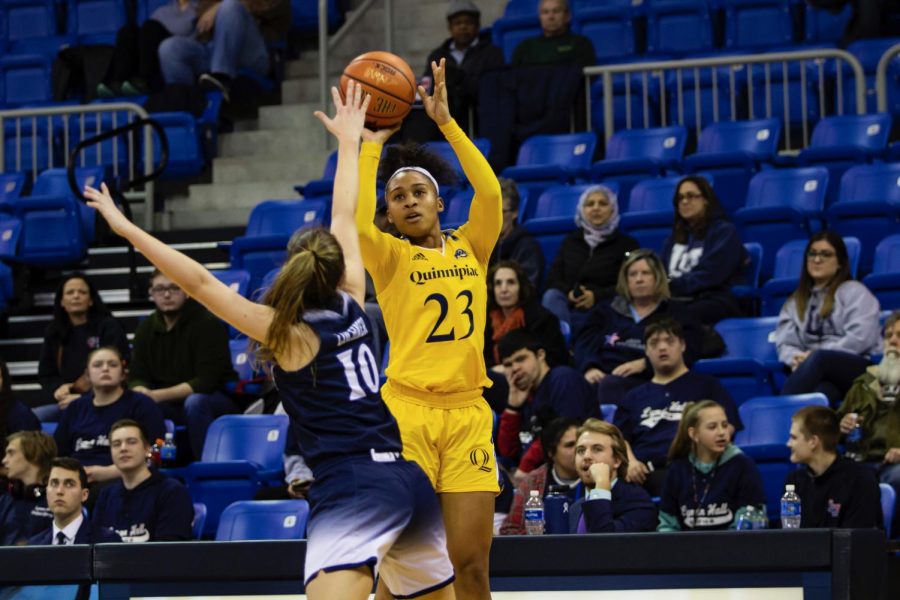 Quinnipiac enters the MAAC tournament as a five seed, its lowest rank ever in the tournament.

In the final home game of the 2019-20 season, the Quinnipiac women’s basketball team hosted the MAAC-leading Marist Red Foxes.

Following a result that didn’t surprise many, Marist (23-4 overall, 16-2 MAAC) went back home with a win. Dominating for most of the game and building up leads as big as 19 points at times, the visitors came to town and took care of business as they have all year.

Quinnipiac (13-14 overall, 10-8 MAAC) started the game hot, jumping out to a 7-2 lead in the first 3:57 of the game. The team was moving the ball, getting open looks and creating opportunity after opportunity while smothering the Red Foxes on defense.

After a missed Marist jumpshot, Quinnipiac sophomore guard Mackenzie DeWees pulled down the rebound and pushed the pace up the floor. She found senior forward Paige Warfel trailing the fastbreak, who caught the pass and fired a shot from beyond the arc without hesitation. Warfel buried the three, the last three points of the Bobcats’ early run.

The very next possession, Warfel got herself another great look. DeWees ran to the paint drawing Warfel’s defender to get her open at the top of the arc. Warfel faked a three with the memory of her last make fresh in her defender’s mind, who ran out to contest and left her feet.

Warfel took advantage and drove to the paint. When she did so, help defense came but it was deep under the basket. DeWees’ defender stepped over to challenge Warfel, but she was already under the rim and retreating. Warfel recognized the space she had and stopped to pull up for a jump shot.

The shot missed, but she was doing the right thing. Warfel read the defense, waited patiently for an opportunity to present itself and took a good, open look. She didn’t force anything, she simply read the defense and created her own offense. She took what was given to her, adjusting based on what was available not what she necessarily had in mind.

After that point, the Bobcats started to unravel a bit. On offense, the looks weren’t the same. Players were taking contested shots from inefficient spots on the floor. On defense, there was no stopping the shooting barrage that unfolded before them in the second quarter.

Offensively, Quinnipiac started settling. Marist forced the Bobcats to score from outside without much push back from the hosts.

“They like to penetrate, and we gotta make them beat us from the perimeter,” Marist head coach Brian Giorgis said to ESPN+ at halftime. “If they do, we’ll tip our hat.”

Marist started doubling almost every time a Bobcat caught the ball in the paint, whether it was at the rim or the free-throw line. Once the ball reached the paint, it was smothered.

Instead of moving the ball and finding the open man, the Bobcats started to rush their decisions.

Senior guard Taylor Herd, for example, caught the ball at the top of the arc with just over 30 seconds remaining in the second quarter. She took two calm dribbles to her right then started her drive. Marist did what it had been doing all game and doubled Herd on her drive.

Herd beat her initial defender, but two others stepped up to challenge. With four arms in her face and two behind her, she forced up a running floater along the baseline that missed everything, playing right into Marist’s gameplan. Marist forced a bad look, and Herd settled for it.

Warfel was left wide open right around the left elbow. With four arms in her face, it was difficult for Herd to see her, but had she been patient and kept her dribble she may have seen her teammate.

Freshman forward Cur’Tiera Haywood and DeWees both made great cuts inside and beat their defenders. Freshman guard Sajada Bonner flashed to the corner Herd was driving from, presenting a handoff opportunity for Herd. As the Bobcats approach postseason play, having played their final game in the People’s United Center this season, it’s imperative that they react patiently and smartly in situations like these.

There were flashes of greatness against Marist that were reminiscent of last year’s team, but they were few and far between.

Following a timeout, Haywood got herself a great look. She caught the ball on the left block, turning her back to the basket to post up her defender. A couple of strong dribbles toward the rim got her some space before she turned and pump faked.

Her defender bit on the fake, but Haywood didn’t capitalize. She faked again, forcing the same result, and didn’t make the same mistake twice. Once her defender hit the apex of her leap and started coming back to the court, Haywood left her feet and hit the short fadeaway, embodying Bobcat-legend Aryn McClure who made similar shots throughout her career.

The Bobcats get opportunities like these often but don’t always capitalize. Too often they’ll rush a shot, forcing one up through pressure and defense.

In a performance that should earn her some minutes in the final two regular season games (Niagara on March 5, and Canisius on March 7), sophomore guard Amani Free made a handful of moves that impressed.

Halfway through the fourth quarter, Free made a great cut through the defense. Ward and Warfel cut through the paint to free up space that Free ran through, setting up on the right block at the end of her cut where she caught the ball. Great off-ball movement from three Bobcats created space against a stingy defense.

But then, Free rushed it. She caught the ball and thought about scoring.

Hell bent on finishing her move, she turned back to the middle of the floor and met a double team but put up the shot anyway, failing to read the defense. Ward was wide open behind the 3-point line where she could have shot or drawn a defender and kicked to DeWees at the top of the arc.

Instead, Free forced the shot over the double team and complied with the defense.

Her initial move was a smart one. Had she pump faked, her defender may have still left her feet. Then she could have gotten a more open look — like the one Haywood created in the first half — or even drawn a foul and gone to the line.

If the Bobcats can take advantage of opportunities like these the way that Haywood did more often and start cutting down on taking shots like Free’s, their offense suddenly becomes exponentially more dangerous. If they remain patient and adapt to situations as they present themselves rather than going through the motions and forcing shots that aren’t there, they could be a serious problem for opponents in the MAAC tournament down in Atlantic City, New Jersey.

In order to capitalize on opportunities more often, though, Quinnipiac will need to continue creating them. The team shot 18-for-61 (29.5%) from the floor and 4-for-19 (21.1%) from three against Marist, evidence of its forced shots throughout the game.

A great look came when Bonner exposed Marist’s defense rather than allowing it to dictate her decisions.

Bonner jumped up to the right elbow where she caught the ball. She pumped, drove to her right and drew a couple defenders, leaving Herd and DeWees open from 3-point land.

When her teammates’ defenders collapsed, like they had been all game, Bonner made the decision to work with what she was given. Marist wasn’t allowing easy looks inside, so she let DeWees take advantage of her easy look from three.

Another great chance came courtesy of Ward in the first half. After a hesitation at the 3-point line, she got her defender off balance and blew by her to the paint. The defense collapsed as usual but was late, and Ward had the paint essentially to herself.

The only other players in her way were retreating to the basket with her. The only defender that stepped up did so to set a charge, but she was in the restricted area. Ward knew that her drive could only end with a basket or a foul so she fully committed to it.

DeWees gets herself situations like these all the time, but she kills her drive too often. She’ll stop and pop from midrange, freeze and look for a pass or bring the ball back out to the perimeter after meeting opposition despite openings in the paint.

Ward didn’t do any of those things. She kept pushing to the basket and got herself to the free-throw line.

She didn’t throw up a crazy shot, she didn’t just sprint toward the basket with her head down and hope for the best. She felt the defense backing toward the rim with her and knew she could get to the basket.

The Bobcats need to do more of this moving forward. Forcing up bad shots and failing to take what the defense gives them isn’t what’s going to get them their fourth-straight MAAC championship. For the first time in a while, they aren’t the most talented team in the conference.

They’ll need something else to help them beat out top teams like Rider and Marist, and smart basketball is it. Marist came in with a great gameplan, but Quinnipiac wasn’t helpless. Marist took away opportunities that Quinnipiac wanted, but it didn’t take away every opportunity.

It simply forced other ones, and Quinnipiac needs to adjust so it can take advantage of those other opportunities. When its initial gameplan is shut down, the team will need to be able to recover during the game to advance.

If the Bobcats can figure this out by March 10, when the MAAC Tournament begins, they might have a legitimate chance for a fourth-straight nylon-cutting ceremony.